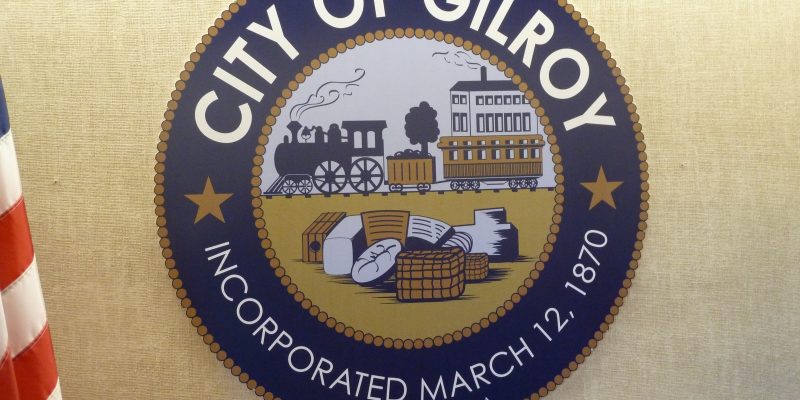 Seal of the City of Gilroy, Calif. mounted on the wall in the City Council Chamber behind the dais.

Gilroy Mayor Roland Velasco issued an emergency proclamation early Monday morning in the aftermath of a mass shooting at the Garlic Festival on Sunday afternoon.

Four people, including the suspect, were killed and at least a dozen others were injured in the attack. Police continue to look for a possible second suspect, Gilroy city officials said.

Velasco shared the proclamation on his Facebook page, noting that the proclamation would allow the city to request personnel and equipment and help the city get reimbursed by the state for expenses related to the response and investigation.

“This is critically important since we have police, fire and FBI personnel that will remain on-scene for the next few days processing the crime scene,”

City officials confirmed early Monday morning that the suspect, who was shot and killed by police, was armed with an assault-type rifle. The shooting was reported at 5:41 p.m. Sunday, Gilroy police Chief Scot Smithee said.

In a statement, Velasco said:

“This is a tragic incident for our community.”

“On behalf of the City and the Gilroy City Council, our thoughts and prayers go out the victims and families.”

The shooting suspect appears to have entered the site via a creek that borders a parking area, and used a tool to get past the secure fence line, according to Smithee.

Gilroy city officials haven’t confirmed the name of the suspect as of 7 a.m., although several media outlets have identified him as 19-year-old Santino William Legan and have aired footage of officers at Legan’s Gilroy home.

St. Louise Regional Hospital received six patients from the shooting, and one of those patients died, according to county health system spokeswoman Joy Alexiou. Two others have since been discharged, she said. The conditions of the others ranged late Sunday night from fair to critical. Two of the patients admitted to St. Louise were transferred to Santa Clara Valley Medical Center, which also had five other people admitted for injuries related to the shooting, Alexiou said.

Two victims have been admitted to Stanford Medical Center, according to hospital spokeswoman Lisa Kim.

More information is expected to be released at a news conference at 10 a.m. at the Gilroy Police Department.

At least four people, including the suspect, have died and another 15 have been injured as a result of a...