It was a night for heated rivalries in the Bay Area. While the world’s eyes focused on Game 1 of the Warriors-Rockets showdown in Oakland, across the bridge the Giants started their three-game series against the Dodgers.

A sizzling Giants offense that scored 30 runs in three games and averaged 7.3 runs during a six-game road trip against Cincinnati and first-place Houston simmered down upon its return to San Francisco, beating Los Angeles 2-0 on a chilly Tuesday night.

The Giants didn’t score much, but the energy at AT&T Park was still high; the Dodgers are in town, and, finally, so is Hunter Pence.

Pence went 0-for-4, an anti-climactic home debut after the 4-for-8, two-run homer show he put on in Cincinnati. But his presence was essential, said Tim Hudson:

Pence was happy to be back:

“Coming home in front of our fans, it’s an electric atmosphere … I’m definitely extremely excited. I’m trying to hold that in.”

Despite fruitless efforts at the plate, Pence made a nostalgia-inducing catch at the fence, robbing Adrian Gonzalez of an extra-bagger.

Said Pence of his signature wall catch in right that he made look so effortless:

“You never know with the wind, especially in that Bermuda Triangle.”

The Giants’ potent one-two punch of Joe Panik and Angel Pagan managed a meager rally against Dodgers’ righty Carlos Frias (L, 3-1, 2.55 ERA) in the third inning. Panik, who had doubled his last at-bat, hit a one-out bloop single. Pagan followed with a single of his own.

Buster Posey notched the RBI with a single to score Panik. The Giants held that 1-0 score through most of the game thanks to a shutout pitching performance.

Giants starter Tim Hudson settled down a bit too. After giving up 21 hits and nine runs in his last two starts, the righty pitched 6-1/3 innings of shutout ball, giving up five hits and struck out two.

Hudson got it done, like he usually does, with his sinker. The Dodgers’ hits found their way to a shifting Brandon Crawford; he reigned in his command over it especially well today, said Bochy:

“He kept the ball down … he had good stuff, got his ground balls and stayed away from the heart of the plate.”

Hudson said his mechanics doesn’t change much, the placement just varies start to start. Today, he credited Posey for the solid start:

“Buster called a great game, he mixed it up well … to go up there and put up zeroes against hem feels good.”

After Alex Guerrero’s single in the sixth, Hudson (W, 2-3, 4.01 ERA) handed the ball over to the bullpen, who took on the Dodgers’ only offensive threat of the night in the seventh.

Justin Turner hit a double-play ball to Casey McGehee, who overthrew the ball to Panik for an uneasy out at second. Panik committed his first error this season with a botched throw to Brandon Belt, allowing Turner to reach second.

Javier Lopez took the mound before walking Joc Pederson and Jimmy Rollins to load the bases. Sergio Romo finally ended the inning with a quick groundout from Howie Kendrick.

Romo quelled the final offensive threat in the eighth: He caught Scott Van Slyke eyeing second and notched his second career pickoff. The play warranted the classic Romo post-inning fist pump. He said after the game:

“I was really, really excited to just get out of that inning … I don’t get too many pickoffs, guys.”

The Giants stuck a final dagger with an eighth-inning run courtesy of Belt, who doubled off Scott Van Slyke‘s glove. He advanced on a Pence ground out before coming home via a Chris Hatcher wild pitch.

Santiago Casilla, the immaculate inning celebrity, finished the Dodgers’ bats off despite a Juan Uribe double and Pederson walk scare.

Tim Lincecum and the Giants will face Brett Anderson and Dodgers for Game 2 tomorrow at 7:15 p.m.

The Giants ave now 4-0 against the Dodgers at AT&T Park. … Buster Posey’s RBI single extended his hitting streak to 11 games. 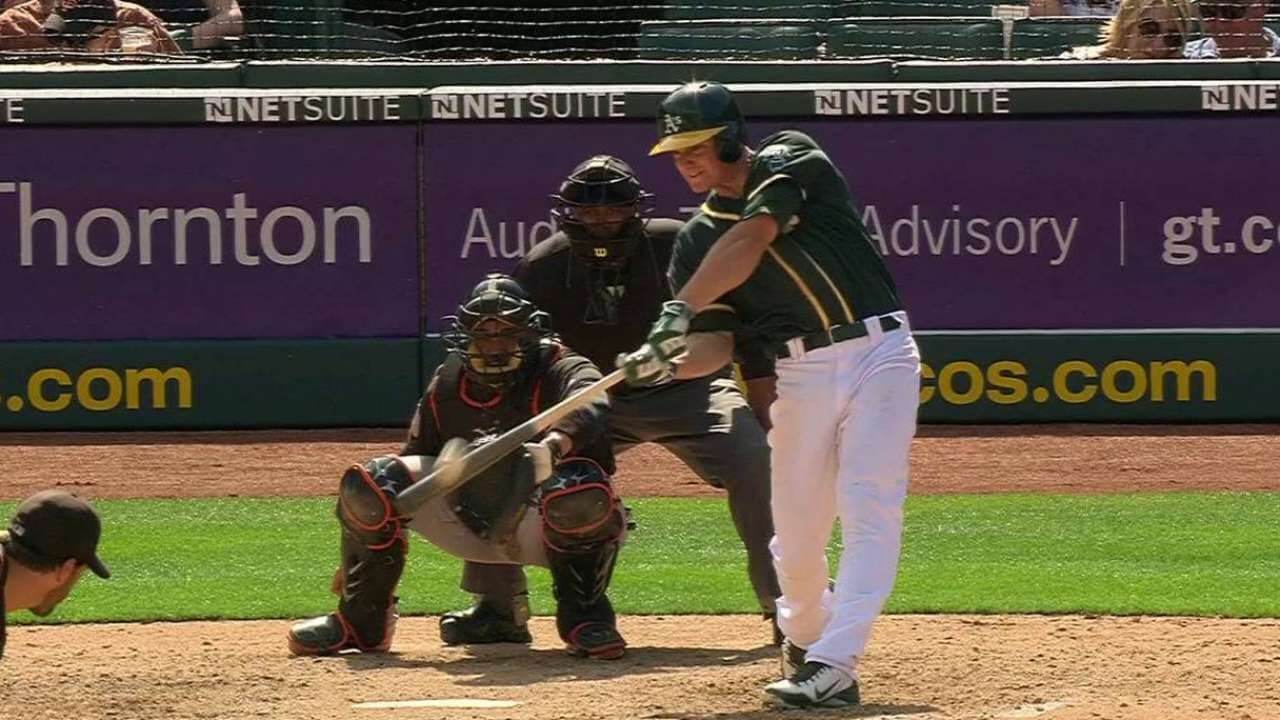