Seven innings of one-run ball from starter Alex Wood plus some timely clutch hits were enough for the Giants to avoid a three-game sweep on Wednesday evening with a 5-2 home win over the Cardinals.

San Francisco hitters drew eight walks and recorded five hits against a St. Louis pitching staff struggling with command and walks. Mike Yastrzemski (1-for-3, 2B, RBI) and Donovan Solano (1-for-2, 2B, RBI) pitched in with run-scoring doubles as Wood tacked on another quality start to his strong 2021 campaign.

Making his 15th start of the season, Wood (W, 8-3, 3.67 ERA) retired the first two Cardinal hitters of the game with a strikeout and groundout, but walked first baseman Paul Goldschmidt to set up an opportunity for Nolan Arenado. Arenado – who launched his 12th career home run at Oracle Park Tuesday night – wasted no time and continued to terrorize San Francisco pitching by swatting a liner to right to score Goldschmidt, who had a head start on the two-out, two-strike swing. As the run scored, Arenado tried to stretch a single into a double but was gunned out from the warning track by right fielder Yastrzemski to end the opening frame.

In the home half of the first, the top of the Giants order caused immediate havoc. Cardinals starter Johan Oviedo (L, 0-5, 5.09 ERA) walked LaMonte Wade Jr. and Yastrzemski before surrendering an opposite-field single off the bat of Wilmer Flores to load the bases. Oviedo rebounded to retire the next two hitters, but drilled third baseman Jason Vosler with a pitch to force in a run and tie the game at 1-1.

Vosler has been shifting between the big leagues and Triple-A most of the season, receiving yet another call-up before Tuesday’s contest. Since being optioned on June 21, Vosler has mashed in Sacramento, hitting .356 with four homers and 16 RBIs in 12 games.

Catcher Curt Casali roped a double down the left field line against Oviedo to begin the bottom of the second and, two outs later, Yastrzemski crushed a double off the center field wall to give San Francisco (54-32) their first lead of the night at 2-1. Thirty-four of Yastrzemski’s last 57 hits have gone for extra-bases, and he’s hitting a boiling .311 with six homers and 17 RBIs in his last 63 at-bats against right-handed pitching.

Oviedo was removed in the fifth in favor of lefty Brandon Waddell, who retired the first hitter he faced before walking Alex Dickerson and Brandon Crawford. Solano emerged from the bench to pinch-hit for Vosler against the southpaw in a crucial spot with one away. On the eighth pitch of the at-bat, Solano split his bat in two, poking a ball down down the left-field line to score Dickerson and make it 3-1.

After Arenado’s first-inning two-bagger, the Cardinals (43-45)watched their offense get neutralized by Wood. In seven innings, the left-hander gave up just three hits, two walks, and struck out six. All season Wood has been reliant on his slider, using its sharp break as a key selection during strikeout situations. Although he’s cooled off in his last four starts (4.19 ERA) after a blazing start to the season, three of his six strikeouts were sliders; the other three were fastballs.

“I think he takes the responsibility of pitching well –– when we’re not at our best –– very seriously. I think all of our pitchers do, but I think Wood, in particular, that’s something that’s on his mind. I thought what was different in tonight’s game was he had all of his pitches working.”

In the sixth, Wood stuck out Dylan Carlson and Goldschmidt on four pitches each, then got Arenado to pop out to Casali behind the plate. The impressive 10-pitch display placed Wood at 81 pitches, a low-enough number to allow him to start the seventh. In 15 starts, Wood has gone at least seven innings three times, and at least six seven times.

Submarine righty Tyler Rogers entered in the eighth and yielded a leadoff double to veteran infielder Matt Carpenter, who was advanced to third two batters later when Carlson recorded an infield hit. Goldschmidt took advantage of a man in scoring position, sending a single into left field to make it a one-run game at 3-2.

Austin Slater singled to begin the home half of the eighth and Darin Ruf – who entered to play first base after Wade left with a hand injury – destroyed a two-run shot (8) to deep center to extend San Francisco’s lead to 5-2. Ruf entered the game with a rough track record at Oracle Park this season (.150, 6-for-40), but the 427-foot blast helped his dry spell.

“That’s pretty big (Ruf’s homer). And we want to continue to stress that Darin Ruf is just a great hitter, doesn’t matter if there’s a lefty or a righty out there. I’m sure he’s –– I think especially being against left-handed pitchers. He gives you a quality at-bat, a professional at-bat and one that has the chance to present power production every time he walks to the plate.”

Jake McGee (3-2, 2.94 ERA) allowed a double in the ninth, but nothing more to seal the victory and capture his 17th save of the season.

“We’re not a ‘rah rah’ team. We’re not a team that gets hyped for big games, we just come out and try and do our jobs to the best of our ability and in good situations. It’s been really fun to watch it unfold and hopefully we’ll keep it up.”

After allowing his first hit in the seventh, Gausman finished the day with seven innings thrown, two earned runs allowed, and eight punch-outs. San Francisco finally put a run on the board in the eighth when Alex Dickerson came off the bench to launch a pinch-hit home run (8). After a leadoff walk and back-to-back hits to start the home half of the ninth, they showed life but were later stopped by All-Star closer Alex Reyes.

Tuesday – Cardinals 6, Giants 5: In Game 2 Tuesday night, the Giants dropped their second straight. Right-hander Johnny Cueto (L, 6-5, 4.15 ERA) was greeted in the first inning by a two-run shot off the bat of Nolan Arenado, an offensive threat that has tormented the Giants since his tenure with the Colorado Rockies and now sits in second place –– behind only teammate Paul Goldschmidt –– on the leaderboard of home runs by an opposing hitter at Oracle Park (12). Brandon Crawford provided much of San Francisco’s offense by collecting four hits and knocking in three runs in the effort. Cueto lasted six innings while yielding four earned runs, one walk, and striking out seven.

The Giants embark on an off day Thursday before welcoming the Washington Nationals to town for a three-game weekend series beginning Friday evening. First pitch is slated for 6:45 p.m.

LaMonte Wade Jr. left Wednesday’s game with a left hand sprain. Darin Ruf replaced him. … Kapler said before Wednesday’s game that Buster Posey is still feeling soreness in his left thumb and the club hopes to have him available to pinch hit at some point. … Newly-elected National League All-Star right-hander Kevin Gausman will return to his home state of Colorado to take part in his first midsummer classic. The 30-year-old, who attended high school in Aurora, received 30 tickets for the game and said they will be distributed among his family and friends. 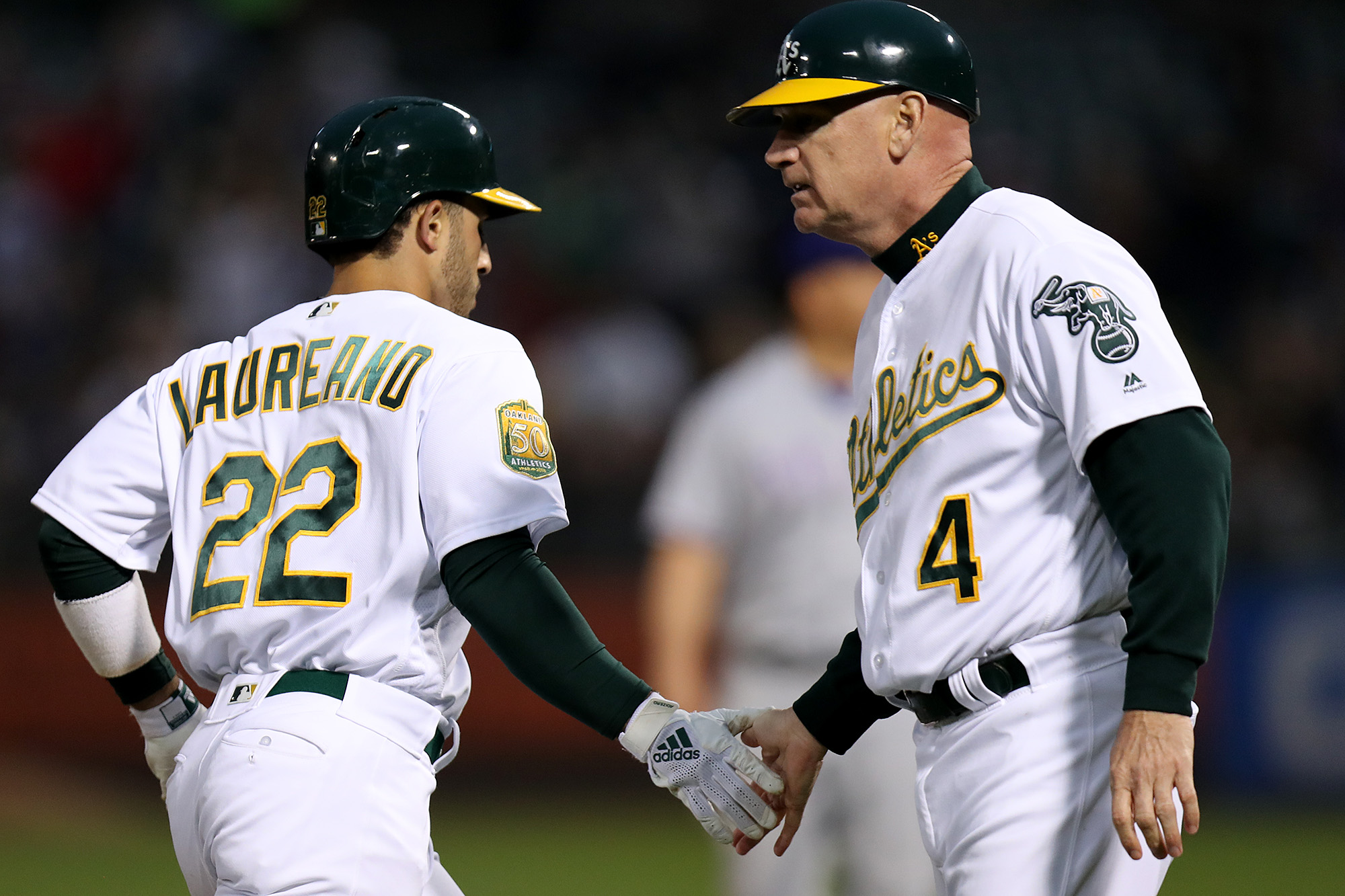