The A’s came out swinging Sunday, jumping to a 2-0 lead in the first inning and building on it all afternoon for a 6-2 win to avert a Battle of the Bay sweep.

As always, the Oakland bullpen made it interesting, even if they were only used for one inning thanks to lights out starter LHP Cole Irvin. He threw eight dominant innings for one of his best starts in an A’s uniform, and even drove in a run at the plate.

Former Giants catcher Áramis Garciá called a great game and even did some damage at the plate against his old friends. He spoke about how great of a job Irvin did and how great it was to get a hit in his lone start of the series:

“He has been great. This outing I thought he threw the ball as good as he has. He just throws a lot of strikes and it really makes my job easy back there when I can put one of the fingers down calling a pitch and just have a lot of confidence that he can get the job done…at the end of the day Cole was really executing his sinker really well today and that is what we kept coming back to.”

Oakland (47-33) was not happy after Saturday night’s 6-5 loss and quickly got on the board Sunday. Elvis Andrus and Matt Olson singled and stole a base before Matt Chapmansingled to center to bring them both in with a 2-0 lead. Chapman’s single in the first extended his hitting streak to 15 games, marking a career high. The last A’s player to match that was Olson, who posted a 16-game hitting streak from June 13 to July 21, 2019.

Bob Melvin was almost impressed with his team’s ability to come out on top early after the 6-5 walk-off loss Saturday night:

LHP Sammy Long made his second career major league start on Sunday and, other than three straight singles in the first, he kept the A’s quiet. Until the sixth, that is, when the Giants (50-27) may have regretted sending him out because it didn’t go well.

The A’s have not faced Long this season but Melvin explained how the team reacted to last night’s loss and all the wildness that comes with this series:

“We are not even 80 games into the season and you are going to have your soft spots, we haven’t played our best here recently but going into an off day and all thats made of the Bay Bridge rivalries, there is a little more to it. The last thing you want to do is be swept. I am not saying it was the most important game in the world but our games came out with some fire. They were a little bit upset last night that we lost that game so instead of coming out here timid after losing two, they came out even more aggressive.”

Long (L, 1-1, 4.95 ERA) hit a batter and walked another before he was relieved without retiring a single batter in the sixth. He allowed four runs on four hits through his five innings, striking out two batters and walking three.Long was about to give up on baseball when he was released by Tampa Bay on the final day of spring training in 2018. When his back started feeling better. he thought he would give baseball one more shot before becoming a firefighter. He now is a starting major league pitcher on the best team in baseball.

John Brebbia relieved Long and gave up a single to former Giants backup catcher Aramís García, driving in Chad Pinder — who was hit by a Long pitch to lead off the inning — and the A’s led 3-0.

Garcia touched on how nice it was to get a hit against his old friends:

“Everybody knows what this offense is capable of. It was really nice to get off to a hot start there at the beginning of the game there, kinda let Cole settle in there and yeah we just kinda kept piling them on as the game went on. I have a lot of respect for those guys over there and what they are doing this year… it was really nice seeing a lot of old friends and competing against them today but I would be lying if I said I didn’t want this one bad so it was definitely good to, play well.”

Irvin didn’t allow any damage on the mound but he did some damage at the plate. Irvin bunted down the first base line to first baseman Darin Ruf who flipped the ball with his glove to Buster Posey – making his first start of the series behind the plate –but his tag on the sliding Kemp was not in time and the A’s were up 4-0 with one out and top of the order due. All four runs belonged to Long.

Irvin gave himself a breather this week on his bullpen sessions and did more dry work, working on getting a half foot length further down the mound and that is what showed up today. Irvin gave full credit to his catcher:

“Command isn’t something that I necessarily worry about because that is what comes first when I pitch and that has always been first for me… had a good change up and had a good slider and Aramis just called a great game. I trusted him from the start. I told him in our bullpen before the game I said ‘You know these guys, this is your old club, I trust you’ so we kinda went about that and there wasn’t many shakes, as the game went on there was a few more shakes but early on that was all [Garcia] and that was all me just trying to hit my spot.”

Brebbia hit Ramón Laureano – who started in right field on Sunday – which loaded the bases with one out. Andrus sacrificed in the A’s fifth run of the game on a fly ball to right. Olson struck out looking to end the three-run sixth inning, and the A’s were a Chapman at-bat away from batting around the order.

Irvin kept the Giants fans quiet all afternoon. Ruf led off the fifth with a single for the second hit of the game, and a lack of communication between the A’s middle infield allowed a baserunner with no attempt on the grounder as it slowly rolled to center. Luckily for Oakland, a 5-4-3 double play would clear the bases with two outs and Irvin started the sixth at just 56 pitches.

He explained how Sunday morning started and ended the same way, just great:

“Just one of those days where everything kinda came together and felt good and I felt like the past 3 or 4 outings I’ve just been super close from a quality start like this …The team got another W in the win category and I am pretty happy as long as the boys are happy. I brought them donuts today so I think that helped so it was a good day. It was a good day.”

Irvin walked his first batter of the game, pinch hitter Mike Tauchman with one out in the seventh, but a strikeout to top of the order Austin Slater would follow and it was another scoreless inning for the left-handed starter. Irvin kept the Giants to just three hits before walking Steven Duggar to lead off the eighth, his second walk of the game. Irvin then hit Austin Slater with two outs and runners on first and second, the most action the Giants had all game. Wilmer Flores flew out to center to end the Giants most exciting inning and it came without a hit.

Irvin explained why he couldn’t go the distance:

I was definitely amped up after the eighth. I come into the dugout and he goes how are you feeling and I said I am good and then I realized real quick that my legs were just not under me. I told him and I respect BoMel so much I just told him honestly, as much as my mentality wants to go and I wanted to go, I trust our bullpen and I trust our offense and it was one inning so I was pretty confident they would get the job done and they did sothat was something I had to be honest with him.”

James Sherfy gave up a leadoff single in the seventh to Chapman on a bloop infield grounder, then Kemp drew a walk and Garcia hit a hard grounder just past a diving Mauricio Dubón, who started at shortstop on Sunday. Chapman sprinted from second and was safe on the slide home to extend the A’s lead to 6-0.

Zack Littell threw the first Giants 1-2-3 inning and he did it facing the A’s top of the order in the eighth. José Álvarez pitched the ninth for the Giants down 6-0 and threw the second perfect inning of the day. Irvin may trust his bullpen but most are concerned. The ninth inning was a prime example of the inconsistent bullpen.

Deolis Guerra was the one and only A’s reliever to make an appearance and it came in the ninth. Mike Yastrzemski was hit by a pitch to lead off the inning before Posey hit a line drive to right off the wall to put runners on the corners with no outs. Thankfully for Guerra, a beautiful 5-4-3 double play gave the A’s two outs but put the Giants on the board. It didn’t stop there – it never does with Guerra – as he gave up back-to-back doubles to Donovan Solano and Duggar which made it 6-2.

Guerra was relieved after two outs and two earned runs and Lou Trivino had to get the final out of the inning with a runner on second and Brandon Crawford pinch-hitting. Crawford was 0-for-4 in Saturday’s walkoff win, and he struck out to end the game.

The A’s get their tenth off day of the season on Monday, a nice reward for not being swept in the first Battle of the Bay series of the 2021 season.

Brandon Crawford did not start at shortstop on Sunday. … Ramón Laureano played right field and Skye Bolt started in center. … Elvis Andrus moved up to the No. 2 spot in the A’s lineup, going 1-for-4 with one run scored. 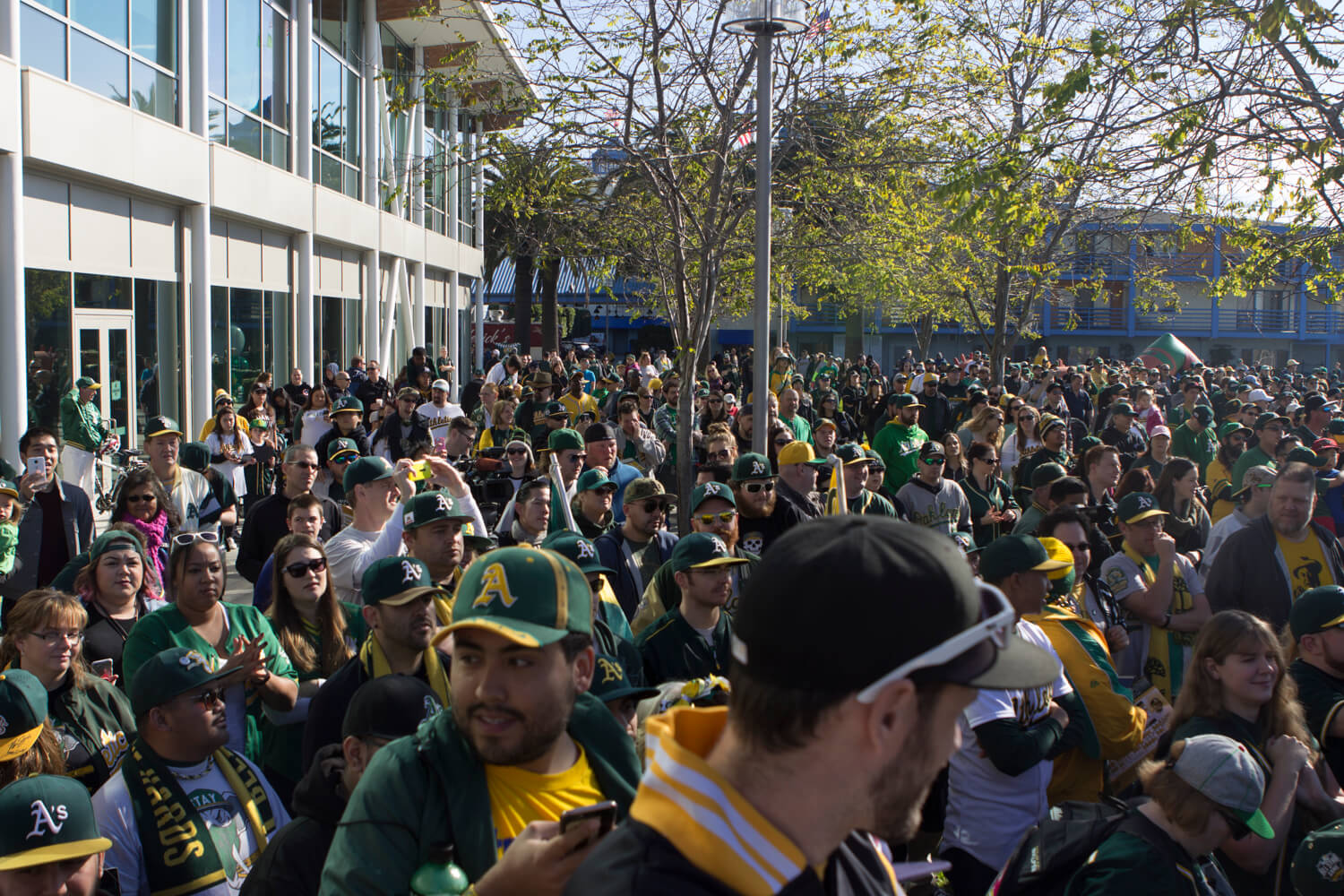