The A’s batted around the order in a five-run seventh inning off two Giants relievers to beat San Francisco 6-0 Saturday afternoon and climb within a single win or Houston loss of the AL West title.

Oakland awaits the outcome of the Houston-Arizona game tonight and, if the host Astros lose, the A’s (33-19) will officially be American League West Division Champions, if the Astros win, the A’s will look toward sweeping the Giants (25-26) Sunday to earn their title.

Jesús Luzardo (W, 3-2, 3.76 ERA) kept the Giants scoreless through six innings and the bullpen followed his lead and shut out the Giants for the second game in a row of the Battle of the Bay series. The A’s and Giants bullpens were complete opposites on Saturday.

Luzardo didn’t allow a hit until the fourth and, thanks to gold glove first baseman Matt Olson, he was able to get out of the inning scoreless. Donovan Solano led off the inning with a single and Evan Longoria singled to put two runners on. Mauricio Dubón followed with a soft grounder to Marcus Semien who bobbled the ball and Dubón was safe at first on the play.

What could have been bases loaded with two outs was the end of the inning after Solano rounded third a little too far and third base coach Ron Wotus screamed at him to get back but Olson quickly threw the ball to Jake Lamb at third who made the tag to end the inning. Luzardo allowed five hits but didn’t allow a single run or walk after 90 pitches through his six full innings with seven strikeouts.

Melvin explained the play Olson made:

“Nobody makes that play, well somebody makes that play but not look that easily. Whether it is a man on second and a ground ball to first where he throws over to third or a play like that, he is one of a kind. He is the best defensively that I have ever seen and ever had and makes it look easy on top of it. He works on all those plays and gets rid of it like a middle infielder, best in the game.“

Luzardo said the Olson play was huge, saving the inning and potentially a run. He spoke about the key to his success his second time out against the Giants this season after only lasting 3-1/3 innings last time:

“I just feel like last time they were really hunting that sinker and I was making mistakes with it I wasn’t necessarily putting it where I needed to put it but just kinda mixing and matching, up and away, up and in, just mixing the spots with it as well as throwing that change up for a strike a lot and then got a slider, a diff type of slider back so I am glad I have that in the bag now.”

Olson explained his thought process on the play:

“I saw him, once Marcus couldn’t get a clean grip on that ground ball I kinda figured he was going to be safe, I think it was Dubon, figured he was going to be safe so I started watching Solano, sometimes guys can get aggressive rounding it just in case something happens try to score, he took a little too aggressive of a turn and was able to get him.”

Kevin Gausman didn’t allow a base runner until the fourth inning when he walked Mark Canha with two outs. A wild pitch advanced Canha to second before clean-up hitter Olson did his job, singling to center to bring in the first run of the game. Gausman allowed just four baserunners, three from walks, but the Giants bullpen and outfield couldn’t keep them in the game.

Melvin spoke about his team’s win:

“Guys are playing loose, they are playing at a high level, they know what is at stake and early on it looked again, real timely. We get a ball in the dirt, a guy moves up, [Olson] gets a hit, it’s our first hit of the game and we are ahead 1-0 so, we have been able to take advantage of some mistakes and do the best we can … all around really good game similar to last night.”

“His stuff is off the charts. They made him work a little bit, worked his pitch count up but got it under control in the last couple innings but I wanted him to get off with a good feeling. I didn’t wanna go deep into the 100’s to get through the next inning, we had a bullpen that was ready to go so 6 shut out [innings] against this team, all right handed hitters, great offensive club, I thought he pitched really well.”

LHP Sam Selman pitched the seventh for the Giants and gave up a single to Stephen Piscotty for his first hit being back in the lineup after a knee scare in Seattle. Lamb followed with a bomb to right, his first hit of the game and second dinger wearing green and gold to lift the A’s 3-1. Selman walked Robbie Grossman before Selman’s day came to end.

Selman was relieved by Sam Coonrod, who gave up two hits, two runs and a walk on 22 pitches in his 1/3 inning of work. It got worse when Coonrod came in, but you could blame the Giants outfield. Ramon Laureano hit a high fly ball to left, which Darin Ruf dropped before also making a bad throw to second. Grossman froze at first and was eventually tagged out at second.

Jonah Heim followed with a single that beat the shift to left. Laureano was runnign on contact and landed on third. With runners on the corners and two outs, lead off hitter Tommy La Stella hit a rocket to deep center. Dubon jumped up to make the catch but the ball bounced off the wall for a standing triple for a 5-0 A’s lead. Semien hit a high fly ball down left field line and once again, a diving Ruf dropped the ball for a standing double to make it 6-0.

You might think the A’s would all watch the Astros series together to celebrate if the Astros lose. Olson, though, said he would rather earn the title with a win tomorrow:

“I’m sure I will check the score just to know what happens but we want to come in tomorrow and get the win and kinda celebrate it that way. It is always better when you win and do it as opposed to somebody else losing and kinda making it happen. We are going to continue to take care of our business regardless, games do still matter and we wanna have some momentum going into the playoffs.”

Luzardo said will celebrate in his apartment playing video games, but agreed with his teammate that it is better to get the title with a win:

“It is probably better to go out and win tomorrow and not count on other people’s losses but I think it is big either way if we clinch that AL West, that is part of our goal this year when we started and we have more goals that we need to get too so it is a part of it.”

LHP Jake Diekman made his 18th appearance and pitched a perfect seventh inning for the A’s. Diekman hasn’t allowed a single run all season. … Marcus Semien received his 2020 Jim “Catfish” Hunter Award for his play on the field and conduct in the clubhouse that “best exemplifies the competitive, inspirational, and courageous spirit” of Hall of Famer Jim “Catfish” Hunter prior to the game. …Tommy La Stella struck out in the first, just his second strikeout with the A’s, to end his 67th plate appearance without a strikeout. 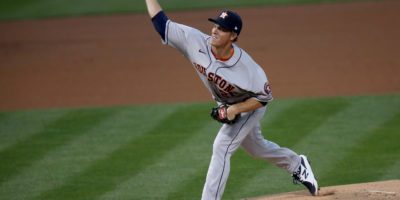 The clock is ticking, and the San Francisco Giants are hanging on to a playoff spot for dear life. A...