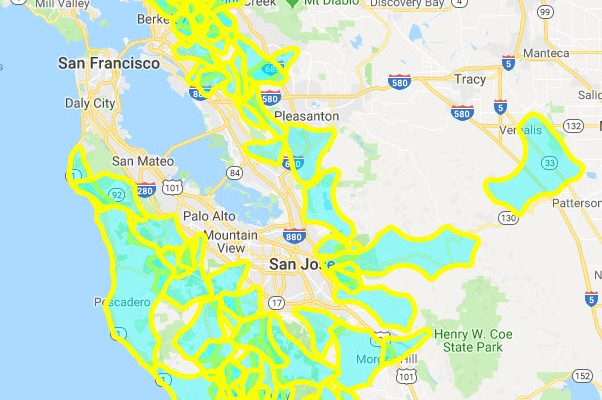 PG&E is planning to shut off power to approximately 800,000 customers beginning Wednesday, October 9, 2019 in Northern and Central California due to fire danger associated with gusty winds and dry weather. The Planned Safety Power Shutoff could last for up to five days. This outage map was provided before the PG&E website went down Tuesday due to excessive traffic. Additional areas have been added to the scheduled shutoff since.

PG&E’s planned Public Safety Power Shutoff, which was expected to impact hundreds of thousands of people across the Bay Area around noon on Wednesday, has been delayed until 8 p.m. in some areas, according to government agencies in the East Bay.

The City of Lafayette and the Town of Moraga have both issued statements on www.nixle.com indicating that PG&E officials have delayed the power outage for about eight hours due to weather conditions, since the anticipated high winds that prompted the National Weather Service to issue a Red Flag Warning have not yet occurred.

The Contra Costa County Fire Protection District confirmed that information, adding that fire danger remains high and urging area residents to be “ultra cautious in ALL outdoor activities & report any fires to 911 immediately,” in a tweet around 1 p.m.

Power cuts off for roughly 120,000 people in Contra Costa County

Power cuts off for roughly 120,000 people in Contra Costa County