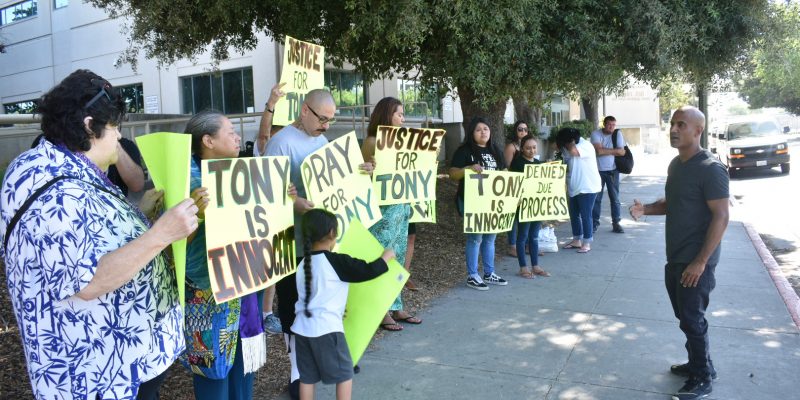 Activists hold signs outside of San Jose Main Jail in San Jose, Calif. Friday, Aug. 16, 2019 calling for the release of Aiello. Aiello, 91, is in custody on suspicion of murdering his stepdaughter in Sept. 2018.

The daughter of a 91-year-old man arrested last September for allegedly killing his stepdaughter says he’s dying in jail while he awaits trial.

Anthony Aiello was arrested Sept. 25, 2018, after Fitbit data from 67-year-old victim Karen Navarra connected him to the scene of the murder on Sept. 8. He turned 91 in January, making him the oldest suspect to ever be held in custody before trial in Santa Clara County — and possibly the United States — family members said outside the courthouse Friday.

Aiello pleaded not guilty to murder charges in April, and has been held at Main Jail in San Jose without bail for almost a year. His daughter, Annette Aiello, said Friday that his health has been deteriorating, with conditions including congestive heart failure and kidney problems. Raj Jayadev, CEO of Silicon Valley De-Bug, said Aiello has not been able to eat, dress himself or complete daily tasks.

Aiello last appeared in court in April, using a wheelchair and an assisted hearing device with his arms shackled. His attorney, Edward J. Caden, requested bail due to “extreme health concerns,” but was denied. Annette and De-Bug advocates gathered in front of the jail and the Santa Clara County Hall of Justice Friday with bright-green posters declaring Aiello’s innocence.

The case was widely reported last year after law enforcement contacted Fitbit to retrieve data from Navarra’s device. Police were unsure whether she had been killed when they first responded to her home in the Berryessa neighborhood for a wellness check on Sept. 13. The scene had been staged to appear as a suicide, and Navarra had a deep laceration in her neck, police said.

Police later interviewed Aiello, who lived nearby in Alum Rock Park with his wife, Adele. Police found evidence of blood cleanup and blood spots on Aiello’s clothing, which he attributed to frequently cutting himself, and said he had dropped off pizza at Navarra’s home the day of her death.

Family and community advocates maintain that he should not be subjected to jail conditions before he is convicted of a crime, especially considering his age. They said he doesn’t pose any threat to the public, and is getting sicker each day he is in custody.

Aiello is a Korean War veteran who owned multiple businesses throughout San Jose, Annette Aiello said, and was enjoying his retirement with his wife at the time of his arrest.

“Every day [he] would say ‘I’m here another day’ and smiled about it, and now he can’t say that.”

“He doesn’t belong here, he didn’t do anything. Every day he can’t believe he’s here and he’s hoping he lives to get home.”

Annette Aiello said the victim was a very private individual and didn’t want to comment on Aiello and Navarra’s relationship. Navarra was a pharmacy technician at Regional Medical Center of San Jose for about 45 years and typically kept to herself, coworkers told law enforcement. Aiello’s next court appearance is on Monday, when he will again be arraigned after a possible grand jury indictment. The court date is set for 9 a.m. in Department 24 of the Hall of Justice, 190 West Hedding St., San Jose.

Shooting near church leaves one dead in East Oakland

Napa police closed northbound state Highway 29 Friday afternoon after a woman jumped from the First Street overpass onto the...