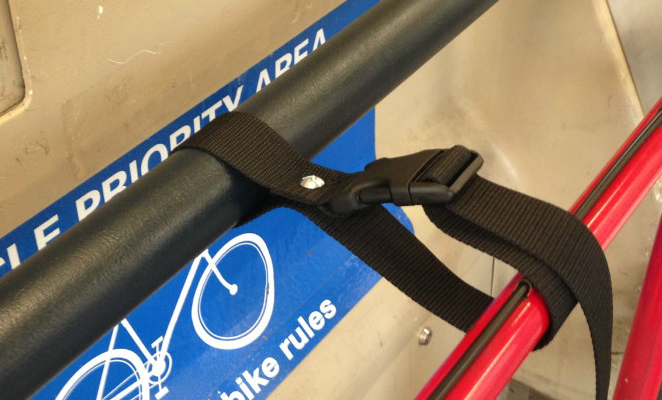 After a successful pilot program on legacy BART trains, new nylon straps will be installed on all train cars to help travelers secure their bicycles while being able to steady themselves.

BART passengers who bring their bicycles along for the ride will be getting some help to secure their bikes from new straps installed on train cars, according to the transit agency.

The new straps are intended to secure bikes to a rail so riders can steady themselves instead of their bicycles. Each strap can secure up to two bikes.

The straps are made of a flame-retardant nylon, similar to overhead hand straps for holding on. They feature a black buckles and are attached to rails with a rivet.

The straps were tested in 60 bike spaces on legacy train cars. According to BART, an online survey about the straps produced “overwhelmingly positive feedback.”

The straps will be gradually added to original train cars and will also be added to BART’s Fleet of the Future cars. The new cars were originally outfitted with three rubber U-shaped docks to serve as bike racks, but BART learned these were not ideal for most cyclists. The straps will replace the docks.

This project stems from the 2012 BART Bicycle plan, which set a goal of doubling the amount of passengers who access BART by bicycle from 4 percent to 8 percent by 2022.

Carjacking suspect in custody after pursuit across Bay

Carjacking suspect in custody after pursuit across Bay

A male suspect was taken into custody after a carjacking in San Francisco led to a pursuit across the Bay...