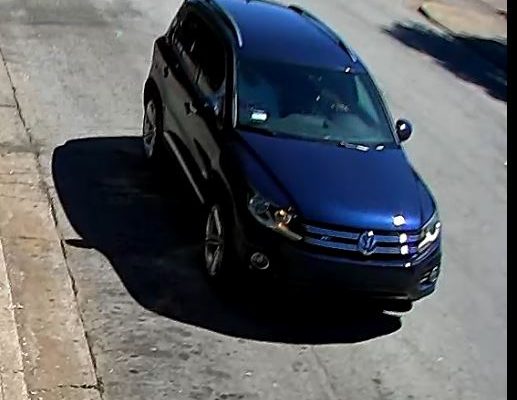 A burglary suspect allegedly robbed at 45-year-old woman at gunpoint in Novato, Calif. July 15, 2019 and fled in a dark blue Volkswagen Tiguan.

Novato police are turning to the public for help in their search for a man who robbed a woman at gunpoint as she sat in her car Monday morning.

Police were called just after 11 a.m. to a parking lot behind a business at First Street and Grant Avenue, where a 45-year-old woman told them she was seated in her car when the robber opened the passenger door and pointed a handgun.

According to the victim, the man took her money and credit cards and fled in a dark blue Volkswagen Tiguan parked at First and Grant.

The woman was uninjured.

Police searched unsuccessfully for the robber, who is described as a black male in his late 20s or early 30s, about 5-foot-10 with a medium build.

He was wearing a white sweatshirt with the NIKE brand and swoosh logo, black warm-up pants and white-and-red athletic shoes. The getaway vehicle had a roof rack, no front license plate on the front and a temporary paper plate in the rear that may have the numbers 945.

Several surveillance recordings have been obtained from the community and police hope there may be more, as well as any information from the public that could lead to a suspect.

Anyone with information is encouraged to contact Novato police at (415)897-4361, or crimetips@novato.org.

San Francisco has finally found a potential location to pilot The City’s first Vehicle Triage Center to provide services to...