The city of San Jose lost a bid to a federal appeals court in San Francisco Thursday to challenge Major League Baseball’s exemption from antitrust laws.

San Jose is seeking to claim the MLB violated antitrust laws by allegedly delaying and blocking a possible move by the Oakland A’s to San Jose.

But a three-judge panel of the 9th U.S. Circuit Court of Appeals said today that MLB is protected from the lawsuit by the precedent set by three U.S. Supreme Court decisions that established and affirmed that the business of professional baseball is exempt from antitrust laws.

Circuit Judge Alex Kozinski wrote that only the Supreme Court or Congress can change the precedent. “Like Casey, San Jose has struck out here,” Kozinski wrote.

The court said the scope of the Supreme Court’s previous holding “plainly extends to questions of franchise relocation” and that “only Congress and the Supreme Court are empowered to question” its vitality. The court upheld a federal trial judge’s dismissal of the lawsuit filed by San Jose in 2013.

Philip Gregory, a lawyer for San Jose, said the city will appeal to the high court:

“This paves the way to go to the U.S. Supreme Court. We believe the Supreme Court, when it considers this, will find the exemption does not apply to San Jose’s case. … San Jose can get a baseball team that they richly deserve.”

San Jose’s lawsuit claims MLB’s constitution and actions violate antitrust laws in two ways. One is the territorial rights rule, under which the San Francisco Giants has the right to block an A’s move to the South Bay and can be overridden only by a three-fourths vote of all clubs.

The second is alleged stalling by an MLB relocation committee assigned to study a possible move. 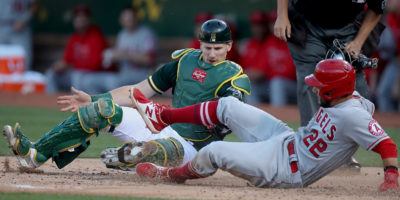 At halfway point, A’s on pace for 94 wins and a battle to the end in AL West