SAP CENTER — The Spokane Shock and reigning MVP Erik Meyer took a battering at the hands of the No. 1 defense in Arena football as the San Jose SaberCats coasted through the opening round of the playoffs with a 55-28 victory Saturday night.

The SaberCats defense disrupted Spokane’s offense throughout the entire game, imposing their will both at the line of scrimmage and in the backfield while creating opportunities for their offense.

Even with veteran Russ Michna being activated off of injury reserve, SaberCats head coach Darren Arbet elected to give rookie Nathan Stanley his first postseason start, and he did not disappoint.

Stanley completed 16 for 30 passes for 181 yards and five touchdowns. After the game, Stanley talked about his offense’s dominant performance:

“I thought we played well on both sides of the ball … Our offense, we played well. Our receivers got open and our O-line did a phenomenal job.”

Stanley, always one to be modest, wouldn’t praise his own play. Arbet, though, held the rookie in high-esteem following his impressive showing:

“He’s been playing great. He’s focused. The thing I like about him is it means something to him, and the guys really believe in him. They’re really fighting for him.”

Meyer opened up the game with a 33-yard bomb to receiver Mike Washington on a corner route, letting the Shock threaten San Jose with an early goal line situation.

When a delay of game penalty cost Spokane another five years, Meyer opted to go through the air to find the end zone.

The MVP quarterback found Washington streaking across the back of the end zone, but a crash into the pads jarred the ball lose and straight into the hands of DB David Hyland, who returned the ball to mid-field.

Coach Darren Arbet’s gamble of sticking with the young Stanley paid off on the opening drive, as Stanley completed 2-of-4 passes, concluding with a 13-yard pass to Dominique Curry, to give the SaberCats a 7-0 lead.

Spokane’s didn’t fare any better on their following drive either, failing to convert yet another red zone opportunity against a stifling SaberCats defense.

Meyer again led the Shock down field, settling for a first and goal from the three, but couldn’t break the coverage of the SaberCats’ defensive backs.

After a pair of incomplete passes, defensive lineman Jason Stewart sacked Meyer on consecutive plays to give San Jose the ball for the games’ second turnover on downs.

It would be just the first of many times that the defensive line would disrupt Meyer. After the game, Stewart, who finished with 3.5 sacks on the night, praised not just the line, but the entire defensive unit.

“Thats probably the best part about eight MVP’s right there.So I think as a unite, we played as a unit. Without the cover we can’t get sacks. If we don’t get pressure they can’t get picks. So I just think that we came together as a family and played together as eight.”

If Stanley looked relaxed during his first playoff drive, his second drive of the game made him look like a seasoned veteran. The rookie needed just two passes to strike again, hitting a wide open Ben Nelson down the sideline to put San Jose up two scores.

San Jose continued to haunt Meyer during the first quarter as DB Ken Fontenette tracked a pass intended deep for Washington, cutting in front of the receiver for the second interception of the game, and returning it to the Shock’s 13-yard line.

While Stanley’s threw a pair of risky passes during his third drive, the San Jose SaberCats continued to create points off of turnovers as the quarterback found a wide open Curry for his second touchdown of the game.

After Fontenette returned an athletic interception in the Shock’s end zone for 26 yards, Stanley again returned to work with a shortened field. On the drive’s tenth play, Stanley hooked up with receiver Reggie Gray to give the SaberCats a 28-0 advantage.

The plays were representative of the intensity that the SaberCats defense showed during the game. After the game, Fontenette talked about the passion that carried them through the game:

“We got a little extra fuel to the fire this week. We heard them saying something about ‘magic Meyer,’ something, in the media. But not only that, we had guys go down last week in Simeon Castille and Clevan Thomas, so not only were we out to dominate, but we wanted to play well for those guys.”

Spokane’s offense was so out of sorts that not even a a gifted penalty on fourth down could save them. After seemingly committing their second turnover on downs of the game, Spokane was granted a new set of downs following an illegal defense penalty against San Jose.

But the SaberCats defense against stood stout, disallowing Spokane to move, and completing the turnover on downs for the second time following a Francis Maka sack.

Fate continued to be cruel to Spokane as they seemingly came up with their first points of the half following a fumble return by Terrance Sanders with five seconds left in the half.

However, a challenge by Arbet confirmed that Sanders was down by contact at the 10-yard line, striking the points from the board, sending Spokane into the half being shutout.

Halftime provided just a slight bit of mercy to Spokane as they were able to make their first defensive stand of the game, forcing the SaberCats to settle for a a 25-yard field goal from kicker Nich Pertuit to open the third quarter.

The Shock followed up their defensive effort by scoring their first points of the game as Meyer’s found his go-to receiver, Washington, in the end zone unguarded to make the score 31-7.

But the SaberCats offense regrouped, as Gray strung together a pair of difficult catches to lead San Jose down the field, capping the drive off with his second touchdown of the game, going uncontested through Spokane’s backfield.

The SaberCats offense also returned to their dominant form as well, forcing the sixth turnover of the game-and third on downs- following a trio of consecutive incomplete passes due to tight coverage from San Jose defensive backs.

San Jose took to the ground game to open the fourth quarter up, using full back Odie Armstrong to run down both the field and the clock.Armstrong would not be denied however, bruising his way into the end zone on a 4-yard rush to tack on to the SaberCats lead at 45-7.

Spokane’s offense finally showed a flash of brilliance in the fourth quarter as Meyer lobbed a 12-yard fade pass to receiver Terrance Carter who made a spectacular grab over tight coverage in the end zone for the Shock’s second touchdown with 9:33 left in the game.

However, it was much too little, and much too late for Spokane to salvage the game.

Spokane received two more touchdowns from Carter and Washington in garbage time, but ultimately never threatened as the SaberCats cruised to a 55-28 final.

San Jose will the winner of Arizona or Portland in Phoenix Sunday at 3 p.m. The SaberCats will either play Portland at SAP Center or take to road to face a tough Arizona team next Saturday. 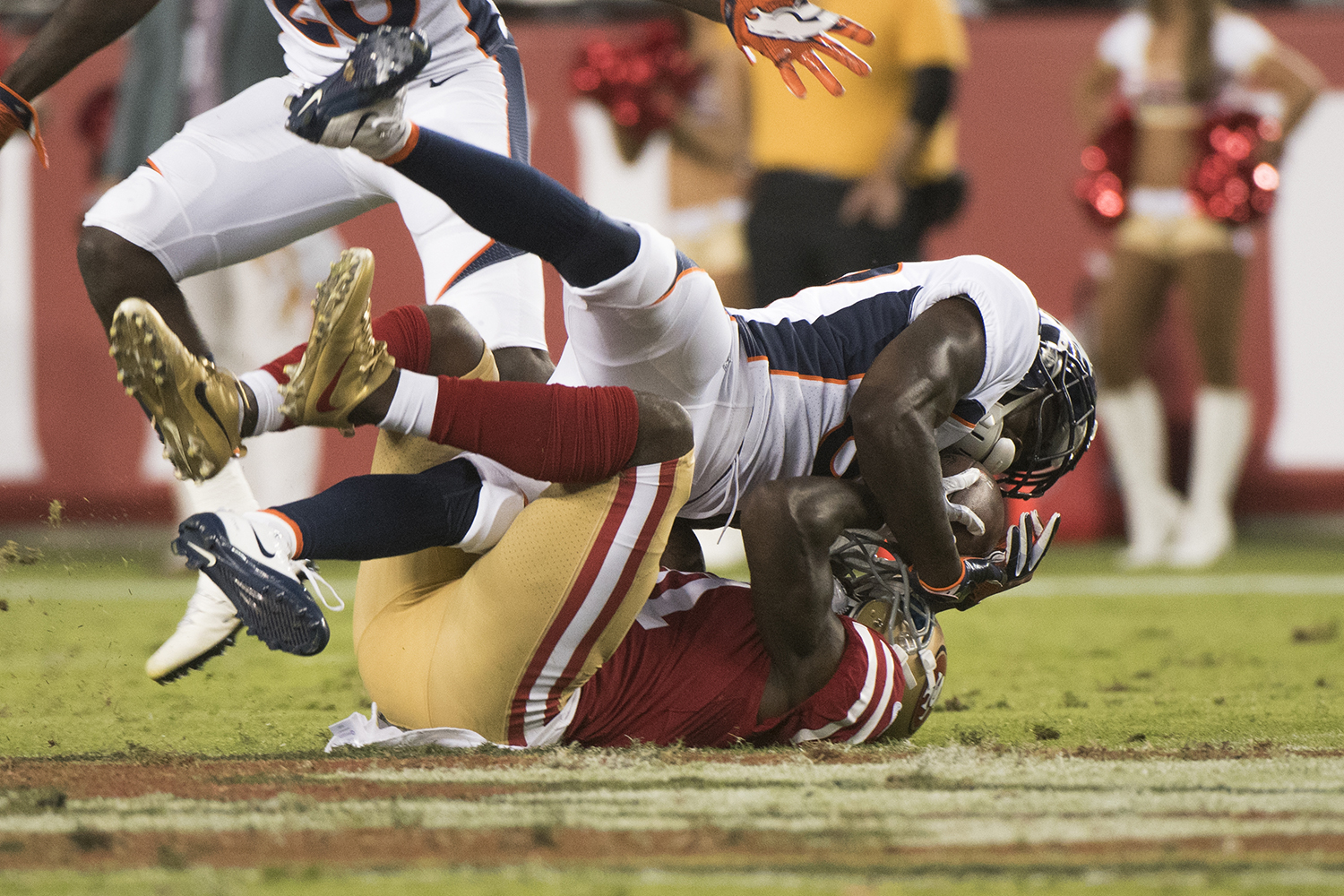