Next time you find yourself waiting in The City’s bitter cold for a bus arriving in 7 — no, 15, now 23 — minutes, maybe this will bring you a little comfort.

A fresh report from the American Public Transportation Association estimates San Francisco drivers who switch to public transportation can save an average of $12,747 a year.

The stats show how an individual in a two-person household can save money by taking public transportation and living with one less car.

The report compares the average monthly transit fare to the average cost of driving, while factoring variable and fixed costs such as insurance, maintenance and gas prices, which are only going up, up, up.

For many savvy San Franciscans, owning a car in The City just isn’t worth it. As of 2010, 34.1-percent of residents exclusively ride public transportation to work, up 3 percent from a decade before. And that number appears to be increasing.

More people are also choosing to pedal it. According to SFGate, recent surveys by the Municipal Transportation Authority show a 71 percent increase in bike ridership during the past five years.

The APTA report ranks SF public transportation riders as third in the nation for monthly savings, just behind New York and Boston.

BART taking applications for use of decommissioned train cars 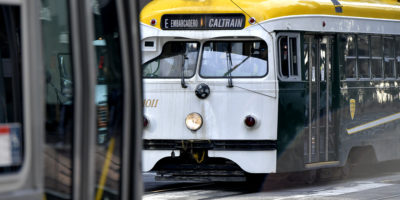 Yekutiel, Hinze make it through supervisor vote for seats on transit board