Search Search
Night Mode Night Mode
Day Mode Day Mode
A 36-year-old cannabis distributor reports that he was robbed at gunpoint by three masked suspects during a delivery to a dispensary at 3503 Alhambra Avenue in Martinez, Calif. on Wednesday, Nov. 17, 2021.
Like 0 Facebook 0 Twitter 0 Email 0

A cannabis distributor was robbed at gunpoint Wednesday while making a delivery to a dispensary in Martinez, police said.

Officers responded at 12:11 p.m. to a report of an armed robbery at Embarc Martinez, a dispensary located at 3503 Alhambra Ave. and arrived to find a 36-year-old man who said he was robbed by three male suspects wearing masks, according to police.

The victim said two of the three suspects approached the victim and stole a large amount of cannabis and some of his personal belongings before the trio fled in a newer-model black Honda sedan with a small dent on the back above the rear license plate, Martinez police said.

The man was not injured in the robbery and the suspects remain at large. Anyone with information about the case is asked to call the Police Department at (925) 372-3440. 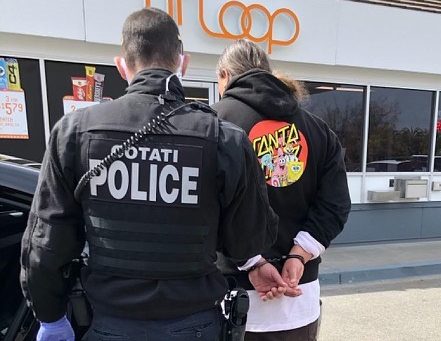