Behind a four-hit afternoon from Wilmer Flores and a strong first big-league start from Sammy Long, the Giants salvaged the series finale to take two of three from the Phillies with a 11-2 victory Sunday afternoon.

The Giants (46-26) have won 18 of their last 25 games and have the best overall winning percentage in the majors.

Making his first career star, Long pitched around a two-out double from J.T. Realmuto –– and a wild pitch that advanced him to third –– to fire a scoreless first inning. In two previous big-league outings, Long had appeared exclusively as a bulk-innings reliever. He struck out seven Rangers in four innings and allowed a run in his June debut June 9 in Texas, and in his most recent game Tuesday against Arizona, he stretched for five innings.

Long on his father, Trent, watching the game from the stands:

“I get my competitive nature from him, I get my work ethic from him. He taught me everything I need to know on how to succeed in life and in sports so it’s a special ay to be able to share that with him.”

Long received run support in the first inning when LaMonte Wade Jr. reached on an error by first baseman Rhys Hoskins, which set up Mike Yastrzemski to crush a two-run moonshot to right off Phillies starter Zach Eflin to give the Giants a 2-0 lead. The long ball – which Yastrzemski seemed to know he got all of off the bat – traveled an estimated 400 feet and may have gone even further had it not slammed into the brick water chimney on the right field arcade. Thirty of Yastrzemski’s last 46 hits have gone for extra bases (19 2Bs, two 3Bs, eight HRs).

Third baseman Flores was the next batter, lining a 2-2 slider at the bottom of the zone over the wall in left-center field for his fifth of the year to add another run and make it 3-0. It was the fourth time this year that the Giants have launched back-to-back home runs. Jason Vosler has received a decent amount of at-bats against right-handed pitching with Evan Longoria nursing a shoulder injury on the injured list, but it was Flores who Giants manager Gabe Kapler turned to at the hot corner against the right-handed Eflin L, 2-6, 4.39 ERA).

Flores now has a nine-game hitting streak, which is tied for the second longest of his big league career. His career best is 11-straight games, which he accomplished in 2018 while playing for the New York Mets.

“We expect these these kind of performances from from Flo. It’s not that we expect to home runs. And you know, we’re always going to expect them to be driving the baseball. But we expect high quality at-bats. We expect him to be an incredibly tough out. We expect him to be able to hit in the middle of lineups against right-handers and left-handers. It’s who he was for us last year and how he’s been in his career. And if you pay very close attention, he’s excellent in the biggest moments.”

In the third, Long struck out Eflin on a loopy curveball and induced a slow tapper off the bat of Luke Williams that shortstop Brandon Crawford charged, picked up with his bare hand, and threw on the run just in time to nab record the out. Hoskins –– a college teammate of Long’s during their tenure at Sacramento State –– drew a two-out walk after Long nibbled the bottom of the strike zone with a fastball, changeup, and curveball. Realmuto made the walk sting, launching a first-pitch fastball to the top of the netting over the center field wall for a two-run shot to bring the Phillies (34-35) within a run at 3-2.

In the home half of the third, Flores singled for his second hit of the afternoon and Crawford’s excellent frame continued when he destroyed a two-run tater to straightaway center for his 16th four-bagger of the season to give San Francisco a 5-2 lead. Crawford, a legitimate candidate to make the National League All-Star team, is on pace to send 36 baseballs over the fence in 2021, more than triple his season average of 11 from 2011 to 2019.

In the fifth, Flores unloaded on a changeup for his second homer and third hit of the game to add an extra cushion for the Giants and make it 6-2.

San Francisco knocked Eflin out of the game in the sixth after Donovan Solano led off the inning with a double to the left field wall and Steven Duggar followed with a hustle double of his own for his second hit of the afternoon to make it 7-2. Two batters later, the Giants used Vosler as a pinch-hitter, ending Long’s solid outing.

Long successfully mixed through a fastball, changeup, and his signature curveball to produce five groundouts, seven fly outs, and six strikeouts. He recorded 47 swings on 84 pitches, with 11 of them swings and misses. With Logan Webb continuing his shoulder rehab process, Long looks to be a strong young arm in the rotation for the time being.

“His curveball, from what I’ve seen, is up there with one of the best curveballs in baseball. That thing drops out of the sky and he’s able to locate it pretty well.”

The Phillies bullpen lost the handle in the seventh when Yastrzemski and Flores smoked back-to-back singles to begin the inning against righty Spencer Howard. Crawford drew a walk and Solano watched a 2-2 slider roll away from catcher Realmuto to score Yastrzemski from third to extend San Francisco’s lead to 8-2. Two pitches later, Solano also drew a walk to load up the bases. Curt Casali followed a hitter later with a walk to score pinch-runner Mauricio Dubon from third to make it 9-2.

The Giants bullpen pitched well as Zack Littell, previously used as an opener for Long’s first two appearances, threw a scoreless seventh inning before righty Jimmie Sherfy recorded a strikeout, a ground ball, and a fly out to make his way through a perfect eighth.

In the bottom of the eighth, Dubon blooped a two-out single to right then Brandon Belt beat out an infield single to put runners on for Crawford, who came inches from his second home run when he smashed a long fly ball off the top of center fielder Odubel Herrera‘s glove for a two-run double to make it 11-2.

Right-hander John Brebbia made his return from Tommy John surgery, which he underwent last June, and walked in from the bullpen to “The Boys Are Back In Town” by Thin Lizzy. Brebbia threw a scoreless ninth inning in his comeback, cementing the victory.

The Giants embark on an off day on Monday before beginning a two-game set with the Los Angeles Angels on Tuesday evening at Angel Stadium. Right-hander Anthony DeSclafani (7-2, 3.01 ERA) will make the start for the Giants against Anaheim’s left-hander Andrew Heaney (4-4, 4.45 ERA). First pitch is set for 6:38 p.m.

Before Sunday’s contest, the Giants activated John Brebbia from the 60-day injured list. Brebbia signed a one-year, $800,000 deal with San Francisco in December and has been rehabbing from Tommy John Surgery that he underwent last June. The 31-year-old right-hander was a reliable bullpen piece for the St. Louis Cardinals from 2017-19 where he averaged 10.2 K/9 and notched a 3.14 earned run average in 175 innings of work. … Starter Aaron Sanchez was transferred to the 60-day injured list as he continues his recovery from right bicep tightness. He threw 1 1/3 innings on Thursday in a rehab start with Triple-A Sacramento, but was removed from the game early after 50 pitches due to a blister issue on his right-middle finger. … Sunday was the sixth multi-homer game for Flores in his big-league career and first as a member of the Giants organization.. … After Saturday afternoon’s defeat against the Phillies, left-hander Conner Menez was optioned down to Triple-A Sacramento. … Alex Dickerson (upper backs train) will continued his rehab assignment with the River Cats and was the DH on Sunday afternoon going 1-for-2 at the plate with two RBIs and two walks. Darin Ruf played three innings at first base and went 2-for-4 with a double and a single for Sacramento as he continues his rehab from a right hamstring strain. … Kapler had some reflections on what this Father’s Day meant to him: 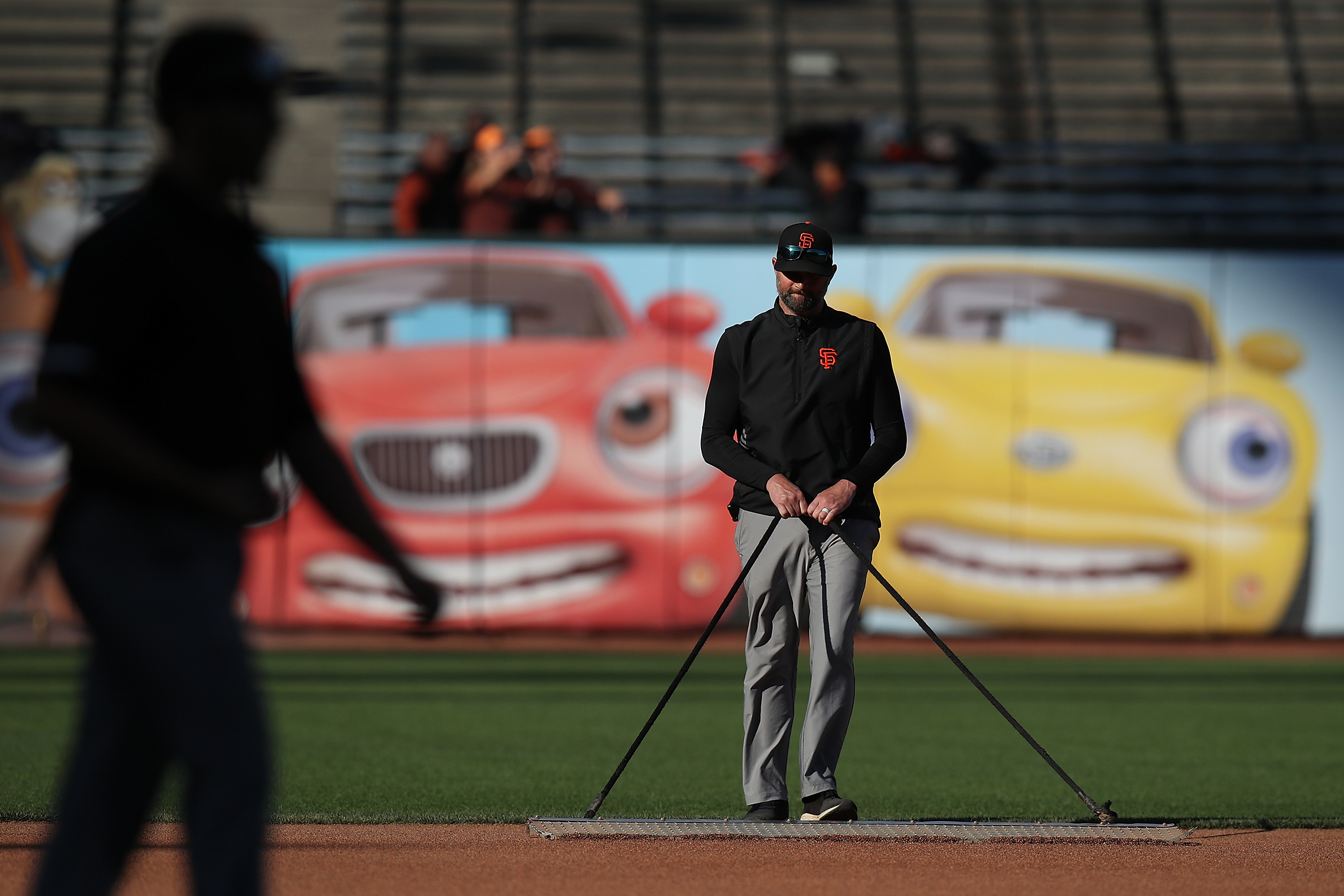