San Francisco officials confirmed Thursday that a resident at one of The City’s navigation centers has tested positive for Covid-19.

Officials with the Department of Homelessness and Supportive Services, which oversees navigation center operations, was informed by health officials Wednesday that a Division Circle Navigation Center resident was confirmed to have the 2019 novel coronavirus.

Upon hearing the news, the site was supplied with additional masks and the Department of Public Health began an investigation to identify with whom the resident may have been in contact while infected.

Additionally, DPH deployed a physician and healthcare workers to perform temperature checks and symptom screenings for staff and residents. Residents experiencing symptoms could be moved to a hotel room for quarantine — other residents may also be moved based on the risk of exposure.

The City has also deployed a cleaning crew to disinfect the homeless shelter.

Abigail Stewart-Kahn, interim director of the Department of Homelessness and Supportive Housing, said in a statement:

“We have been preparing for this situation for weeks, and HSH and DPH are wrapping around the patient with health care and support. The wellbeing of our homeless neighbors is our top priority, and we will continue to work in partnership with our nonprofit service providers, DPH, and the entire City to aggressively contain the virus and protect our community.”

San Francisco supervisors Hillary Ronen, Aaron Peskin, Shamann Walton and Matt Haney Thursday held a press conference just outside of the Division Circle Navigation Center. They collectively expressed disappointment that homeless residents in shelters and on streets have yet to be moved into hotel rooms during the virus pandemic.

Ronen said that supervisors have been talking for weeks with the DPH, DSH and the Mayor’s office to identify housing for the homeless population in the thousands of hotel rooms that currently sit empty.

They plan to introduce an emergency ordinance Tuesday calling on departments to provide at least 1,000 rooms for unsheltered individuals living in congregated settings like homeless shelters.

Trent Rhorer, executive director of the San Francisco Human Services Agency, outlined Wednesday at a press conference how the The City is prioritizing who may be sent to hotel rooms.

Patients in hospitals who show symptoms, do not need extensive hospital care and can be discharged can be offered a hotel room for quarantine use. Rohrer said about 95 percent of the patients offered rooms so far are homeless individuals and the rest are those living in single occupancy rooms where some common areas may be shared with other residents.

The next priority is individuals who live in congregated settings aged 60 and over or have underlying health conditions that make them more vulnerable.

Rhorer said The City will move these individuals provided they can take care of themselves with minimal support from city services.

City officials are also focused on providing hotel rooms to frontline healthcare workers, such as doctors and nurses, who may need a place to sleep if they are afraid they may have been exposed to the virus and do not want to spread it within their households.

The City has to date established contracts with six hotels providing a total of 479 rooms and has so far moved 123 individuals into those designated rooms, Rhorer said Wednesday.

Contracts with two hotels for an 576 additional rooms were still in the negotiation phase as of Wednesday.

Rhorer said he expects to finalize a contract by Saturday with a larger hotel that could potentially supply 1,500 rooms.

Mayor London Breed said Wednesday that The City will sometime this week “thin out” homeless shelters by sending some residents to Moscone West. The location will offer approximately 390 beds.

Supervisors have questioned sending residents to Moscone West, which is considered another congregated setting even with social distancing being practiced.

Homeless individuals at Moscone West be provided city services and food while there.

Explaining some of the difficulties in placing unsheltered persons, Breed said:

“I want to be clear that the capacity and the resources in general needed to provide the wraparound supportive services for many of these populations make it very difficult to just open the doors and allow anyone to walk in.”

“We’re asking everybody that’s out on the streets, that are in congregated shelters, be moved into a private room right away.” 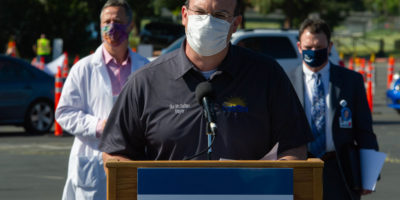