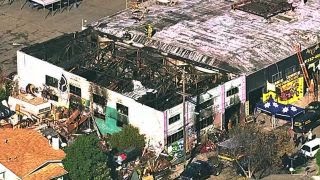 The judge in the trial of Ghost Ship warehouse master tenant Derick Almena and creative director Max Harris said Wednesday morning that she has modified the gag order she imposed on Monday barring the attorneys in the case from talking to the news media.

However, Alameda County Superior Court Judge Trina Thompson said the lawyers in the case are still barred from talking about closed hearings she held Monday to discuss possible juror misconduct.

After holding the closed hearings, Thompson decided to dismiss three jurors, replaced them with three alternates and ordered the revised panel to start deliberating from scratch, even though the original panel had been deliberating for 10 days.

Almena, 49, and Harris, 29, are charged with 36 counts of involuntary manslaughter for a fire at a music party at the 10,000-square-foot warehouse in the 1300 block of 31st Avenue in Oakland’s Fruitvale district, which served as an artists’ collective, that killed 36 people the night of Dec. 2, 2016.

Thompson said Tuesday that she has initiated contempt of court proceedings against two of the three dismissed jurors for allegedly not obeying her instructions to them.

Thompson hasn’t disclosed the nature of the alleged misconduct, but in her comments to attorneys in hearings outside the presence of jurors she has indicated that it may be for violating her admonishment to jurors not to read materials outside the scope of the evidence in the trial and not to discuss the case outside the deliberating room, even with other jurors. Thompson on Wednesday strongly warned the attorneys not to disclose what was said in the closed hearings.

“Anything said in closed session shall not be discussed in the public area. A violation of my order can result in contempt.”

Repeating her admonishment twice to emphasize her point, Thompson told the attorneys:

If the revised panel doesn’t reach a verdict by the end of the day Wednesday, which is only the second day of the new deliberations, it will take a lengthy break from Thursday until Sept. 3, the day after Labor Day, so that jurors have time to transport their children to college. Although the jury will resume deliberating on Sept. 3, its schedule after that remains unclear, as many jurors have made requests for additional days off in September and October, even though Thompson warned them at the beginning of the case that it might last until the end of October.

Cessna 120 crashes after taking off at Livermore airport