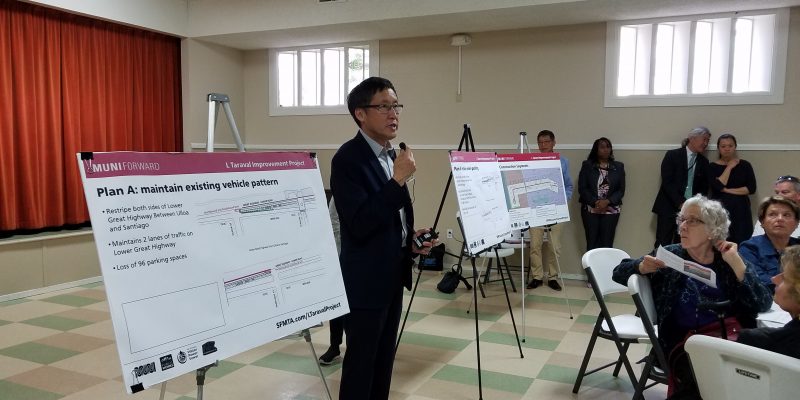 Supervisor Gordon Mar spoke and heard from residents about the L-Taraval Improvement Project during a community meeting in San Francisco, Calif., Wednesday, July 18, 2019.

San Francisco transit officials will once again meet with Outer Sunset residents and merchants Friday to discuss construction plans for a major sewer and transit project set to take place along Taraval Street.

Residents and merchants present at July’s meeting were unhappy with plans to stage equipment and the construction work area along the Great Highway between Ulloa and Santiago streets. The San Francisco Municipal Transportation Agency staff was asked to look into other options, including a parking lot belonging to the San Francisco Zoo.

The SFMTA responded with a letter listing eight reasons the zoo’s parking lot was not considered a viable staging area for the first segment of the L-Taraval Improvement Project. Among other reason, the SFMTA explained that the parking lot lacks enough space to stage construction equipment and accommodate rail track welding work.

Transit officials expressed concern about noise impact on the neighborhood as crews would have to drag rail approximately 2,500 feet from the parking lot to the work site at 3 mph during evening hours.

Additionally, the letter claims that using the zoo’s property would “substantially” increase costs and further delay the project’s timeline, which was originally set to begin July 1. The SFMTA announced plans to establish the staging area along the Great Highway only two weeks prior to the scheduled project start, prompting residents and Supervisor Gordon Mar to request alternative locations be considered.

With the zoo’s parking lot not being available as staging area option, residents and merchants are again faced with the first two options the transit agency presented.

The first option would re-stripe both sides of the Lower Great Highway between Santiago and Ulloa streets and maintain two lanes of traffic. Ninety-six parking spaces would be eliminated.

A second option would maintain 80 parking spaces, but only one southbound lane of traffic would be open on the Lower Great Highway and northbound traffic would reroute to 48th Avenue.

Merchants and residents sent out a joint press release Tuesday expressing a lack of confidence in how the SFMTA is addressing neighborhood concerns.

Ben Wintroub, owner of Tunnel Records located on Taraval Street between 46th and 47th avenues, said the transit agency failed to consider impacts the staging area would have on merchants in the construction area.

In the letter, Wintroub wrote:

“The burden is too great. Other portions of Taraval will only intermittently feel the effects of the improvements, while the lower Taraval area will shoulder the entire burden of the project.”

Mar, who represents in the Sunset District, also expressed his frustration with the initial lack of outreach to neighbors.

“The lack of communication with our office or the public throughout this process has been frustrating and frankly unacceptable, and I stand with the small business leaders asking to be heard. We need this project to move forward, and we need the SFMTA to address the needs and concerns of the neighborhood.”

Mayor London Breed has been called on to assist merchants and residents and spokesperson Jeff Cretan has said a representative will be made available to work with neighbors and the SFMTA to find a solution.

Neighbors have also asked the mayor’s office to help merchants and residents. Mayor London Breed’s said a representative from Breed’s office will be there to help figure out solutions along with neighbors and the SFMTA.

Hundreds of swimmers, runners attempt to ‘Escape from the Rock’ Saturday

Hundreds of swimmers, runners attempt to ‘Escape from the Rock’ Saturday

Hundreds of athletes are expected to "Escape from the Rock" on Saturday during the annual duathlon and swim event at...