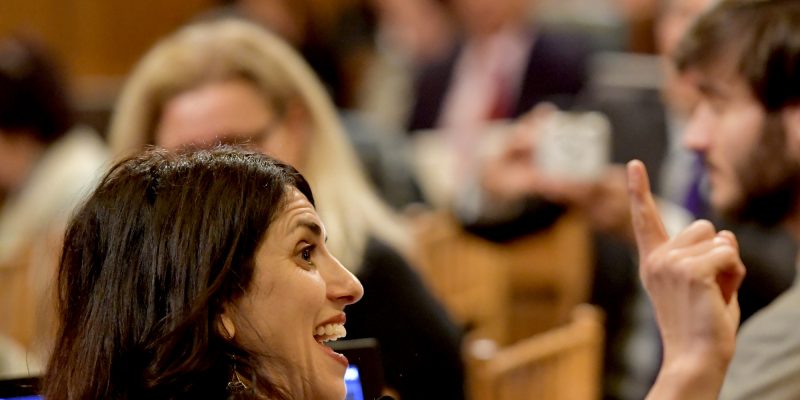 Supervisor Hillary Ronen speaks before the election of Board of Supervisors president at City Hall in San Francisco, Calif., on Tuesday, January 8, 2019.

San Francisco Supervisor Hillary Ronen gave Texas Sen. Ted Cruz her honest opinion about children being detained at the border when she ran into him at Los Angeles International Airport on Sunday.

In a post on Twitter on Monday, Ronen said she had just gotten off a flight when she ran into members of the American Federation of State, County and Municipal Employees Local 3299 who were confronting Cruz. The members were reportedly urging Cruz to close the detention camps and free child detainees.

Ronen’s brief, but blunt, confrontation with Cruz was caught on camera.

She can be seen saying:

“We are horrified about the caging of children and the separation of families. I don’t know how you can live with yourself supporting these policies. Kids are dying and families are being separated and it’s disgusting.”

“There’s policies that Democrats in Congress are keeping in place that are producing this.”

“You have the power; you’ve been a presidential candidate. You sit in Congress.”

“As a result of the policies congress has put in place, we are incentivizing human traffickers and drug traffickers to take children into this country because, effectively, we’ve said that if you bring a little child it’s a get-out-of-jail free card.”

“There is a catastrophe in Central America and Mexico.”

Just before Cruz leaves to board his plane, Ronen adds:

“Look we’re parents, right? If our kids were going to get recruited into a gang and we couldn’t provide for them, we would do everything in our power to save them, that’s what these families are doing.”

The Republican senator has long been an advocate of legal immigration and supported policies in the past to strengthen security at the border.

Ronen represents District 9 in San Francisco, which includes the city’s traditionally Latino Mission District, and has been an outspoken advocate against detentions at the border.

“We must not let them have any peace until there’s justice.”

Protesters stop Israeli ship from being unloaded at Port of Oakland

A father who operated a foster home in Antioch and his son, who is a former correctional officer in California,...