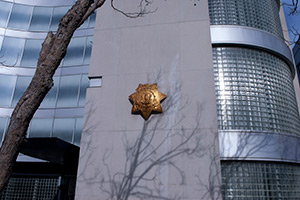 A former San Francisco deputy sheriff accused of having a romantic relationship with a jail inmate who was found with a department-issued firearm she had reported stolen, was convicted of fraud last month. April Myres, 55, was found guilty of mail and wire fraud in an eight-day federal trial that concluded June 26, according to a news release from the U.S. Attorney’s Office, Northern California District.

“The U.S. Attorney’s office will vigorously pursue law enforcement officers like Myres who abuse their positions of trust, especially when motivated by the sort of greed and avarice seen in this case.”

“The defendant not only lied repeatedly to profit from a so-called burglary, but allowed her service firearm to remain in the possession of a dangerous criminal for almost a full year.”

Myres reported her service firearm, radio and numerous luxury goods stolen to police on March 25, 2016, according to a press release from the U.S. Attorney’s Office, Northern District of California. After making the report, Myres refused to cooperate with investigators. Two months later, however, she filed an insurance claim, stating she was due $67,000, prosecutors said.

An FBI investigation concluded Myres’ insurance claim was false, and found she had had an affair with an inmate while she was working at the San Francisco County Jail, according to prosecutors.

Antoine Fowler’s former cellmate testified to investigators that Fowler and Myres were planning a vacation in Hawaii together when he got out, and that Myres had told Fowler she would obtain a pistol for him. After he was released from custody in January 2016, Fowler went to Myres’ house, where he lived until the morning of the supposed burglary, prosecutors said.

The FBI arrested Fowler nearly a year later, on Feb. 2, 2017, and found him in possession of Myres’ firearm.

Myres later accused Fowler of stealing from her, but still failed to disclose her relationship with him. She told her insurance company that she did not know who committed the burglary and that no estranged boyfriends were responsible, according to prosecutors.

Moreover, although Myres had previously claimed that a Louis Vuitton purse, Gucci boots, and a fox fur vest were stolen, the FBI found the items when conducting a search of her home in February 2017, officials said. Myres and Fowler were indicted on April 11, 2017.

Myres awaits her sentencing hearing where she faces a maximum imprisonment of 20 years, five years of supervised release and a fine of $250,000, according to the news release. Fowler pled guilty to one count of being a felon in possession of a firearm on May 14, 2019.

Neither attorneys for Fowler or Myres was immediately available for comment.

Day two of training camp is in the books. The San Francisco 49ers began practicing Saturday for the first time...