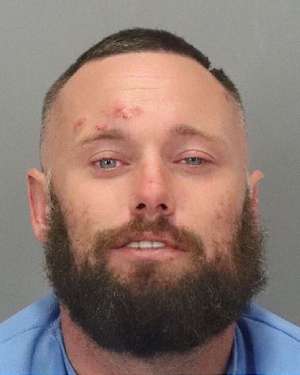 Ryan Garner, 35, of San Jose, Calif. was arrested on suspicion of attempted murder July 18, 2019 after his mother was admitted to the hospital with life-threatening injuries. The victim, Cynthia Mykkanen, 57, died July 23, 2019 and Garner now faces murder charges.

Ryan Garner, 35, was arrested Thursday after his mother, 57-year-old Cynthia Mykkanen, was hospitalized with life-threatening injuries. Hospital workers at Santa Clara Valley Medical Center told police that she would not survive, and was being kept on life-support.

A police investigation led to the arrest of Garner, who allegedly assaulted Mykkanen inside their home in the 3300 block of Cortese Circle on Thursday. He then drove her to the hospital, dropped her off at about 2:34 p.m. and fled the area, according to police.

Police found him later that night driving on U.S. Highway 101 at Blossom Hill Road. Officers used a police dog to arrest him, and he was treated at a hospital for a dog bite before being booked into the county jail.

He was originally facing attempted murder charges, which have since been upgraded to murder. He is currently being held in jail without bail.

Mykkanen was an elementary school teacher at the Alum Rock Union Elementary School District as recently as 2017, according to state records, and was previously listed on a staff page at Painter Elementary School. Mykkanen’s death was San Jose’s 21st homicide this year.

Oakland Mayor Libby Schaaf said on Tuesday that she's not shocked by the results of a new count that shows...