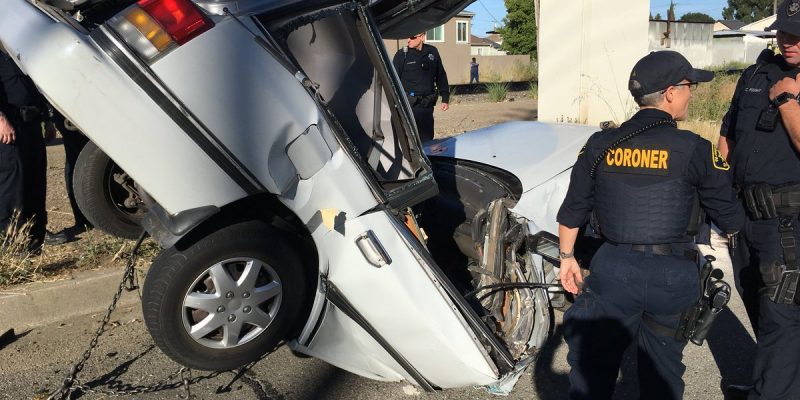 A severely-mangled Subaru Legacy station wagon is seen after its driver fatally crashed into a pole in Oakland on Saturday, June 29, 2019.

One man was killed late Saturday afternoon when a car veered out of control and into a utility pole in what Oakland police said appears to have been an illegal street race.

Oakland police Officer Johnna Watson said two cars were racing eastbound at 5:09 p.m. in the 5100 block of San Leandro Street in the city’s Melrose neighborhood. One of them, a white 1992 Subaru Legacy station wagon with only the driver inside, lost control, veered across westbound lanes, hit a curb, rolled more than once and struck a light pole, police said.

Further information about the driver who died was not available Saturday night, said Watson, adding that the roof had to be cut off the Subaru to extract the man’s body.

San Leandro Street was closed for more than three hours as police investigated the crash, reopening about 8:30 p.m. Saturday.

This crash happened on a night when Oakland police and the California Highway Patrol are working to prevent “sideshows,” gatherings of people who make cars spin around at intersections and who watch others do it.

“We’re out here working to deter this dangerous and illegal activity.”

The Giants board of directors announced Saturday the team’s CEO and president Larry Baer will return to the organization Tuesday.