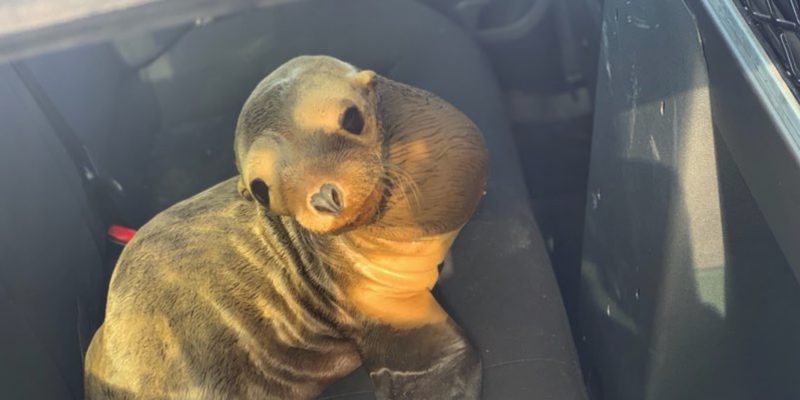 A sea lion is seen in the back of a California Highway Patrol vehicle on Tuesday, April 30, 2019.

A California sea lion got itself into a bit of a jam — a traffic jam that is — when it somehow stumbled onto U.S. Highway 101 near San Francisco International Airport on Tuesday morning, California Highway Patrol officials said.

Around 8:35 a.m., officers learned that the animal was trapped in between the highway’s shoulder and a guardrail just south of South Airport Boulevard, CHP officer Bert Diaz said.

Luckily, the sea lion was able to avoid being struck by a car. According to Diaz, it appeared healthy and uninjured. CHP officers worked with the Marine Mammal Center to safely rescue it and then brought it to the Peninsula Humane Society & SPCA.

According to the Marine Mammal Center, the sea lion is currently in the process of being transferred to the center’s hospital in the Marin Headlands where it will receive rehabilitative care.

On Wednesday, veterinary experts with the center plan to perform a full entrance exam on the sea lion to determine its age, sex and overall condition.

Marine Mammal Center officials said the rescue was made possible not only with help from the CHP but also because of members of the public who called the center’s 24-hour rescue hotline at (415) 289-SEAL to report the incident.

Dr. Cara Field, a veterinarian with the center, said in a statement:

“Today’s rescue of a California sea lion is a great example of the importance of members of the public giving our rescue hotline a call to report a marine mammal in distress. … This action allows our expert veterinary team to provide immediate supportive care and give this sea lion a second chance at life.”