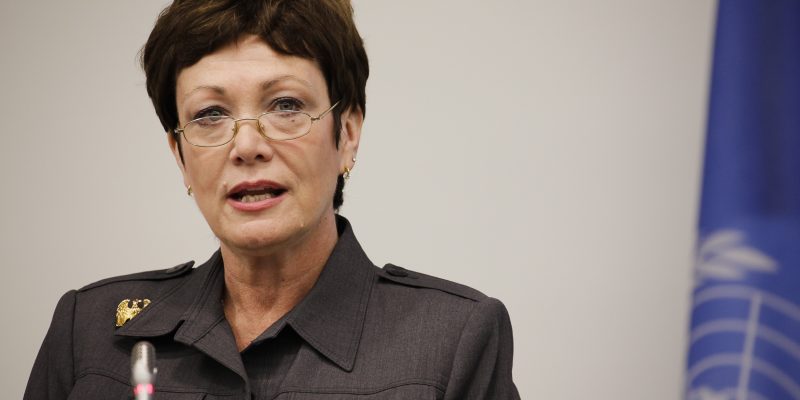 Under Secretary for Arms Control & International Security of the United States, Ellen Tauscher, speaks at the Conference on Facilitating the Entry into Force of the Comprehensive Nuclear-Test-Ban Treaty in New York on September 23, 2011.

Former U.S. Rep. Ellen Tauscher has died, according to a statement released by her family Tuesday morning.

Tauscher, who served an East Bay congressional district from 1997 to 2009, died while surrounded by family members.

A cause of death was not immediately released, but Tauscher had written on Facebook earlier this month that she was recovering from pneumonia as a complication from esophageal cancer surgery years ago.

The statement by the family noted Tauscher’s long list of achievements, including being the youngest and one of the first women to hold a seat on the New York Stock Exchange, and founding the first national research service to help parents verify the background of child care workers.

“You can see Ellen’s legacy in the lives made just that much better, that much safer, that much more secure in the East Bay, in California, in America, and across the world.”

“Ellen was brilliant, gracious and generous and always did her level best to lift up those around her. … Ellen was a best friend and I’ll never forget her.”

Feinstein said Tauscher chaired her first two Senate campaigns before going on to serve for 12 years in her own East Bay seat in the House of Representatives.

Tauscher went on to spend three years as Under Secretary of State for Arms Control and International Security and was appointed by Gov. Jerry Brown to the University of California Board of Regents.

“She remains an inspiration for all of us in Congress and I hope younger members will look to her as an example to emulate,”. More information on memorial services will be forthcoming, according to the family.

motorcyclist died after fleeing from a stop by a California Highway Patrol officer at the Bay Bridge toll plaza and...