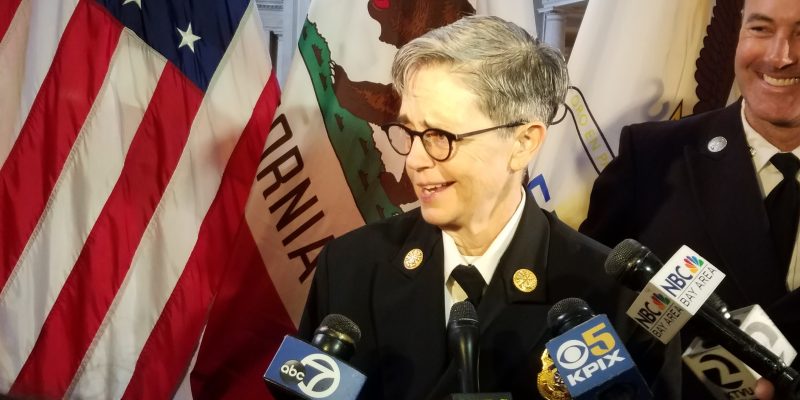 The Fire Department's Deputy Chief of Administration Jeanine Nicholson speaks with the media after Mayor London Breed appointed Nicholson as the next fire chief at a press conference, in San Francisco, Calif., on Wednesday, March 13, 2019.

Deputy Chief of Administration Jeanine Nicholson will serve as The City’s next fire chief, replacing Joanne Hayes-White who announced her retirement last October. Hayes-White will retire on May 5.

Nicholson is a 25-year veteran in the department who has served in many positions, including as a firefighter, paramedic, lieutenant, captain and battalion chief.

In her current role as deputy chief of administration, Nicholson oversees several divisions within the Fire Department such as Support Services, Homeland Security, Human Resources, Investigative Services, and assignment/personnel offices.

Nicholson graduated from Colgate University in New York and first joined the Fire Department in The City in 1994. She has worked in every district in The City.

“We have some amazing men and women who go out there every single day to protect our residents, to do the hard work. They run towards danger. These men and women deserve a leader who has seen what they’ve seen, who has fought those same fires, who knows what they have gone through on a day-to-day basis and I’m pleased to announce that I have chosen a leader for the department that has done all of that and more.”

Nicholson has long been on the front lines of fighting fires in The City, including at an arson incident on Felton Street in 2009 where she suffered second degree burns. Nicholson is also a breast cancer survivor.

Nicholson said she was humbled to lead to the department’s firefighters, paramedics and investigators:

“I vow to work hard to continue to carry out the mission and vision of the San Francisco Fire Department and to keep moving us forward in a positive way.”

Some of the priorities for the soon-to-be fire chief including working with Breed concerning homelessness, as the department’s call volume is up for emergency medical services for homeless individuals and opioid users.

“It’s a big one for first responders. I will certainly be working towards improving. We definitely have good system thus far, but we can always do better.”

“Jeanine has worked diligently over 25 years in her career with the San Francisco Fire Department. She gets the importance of teamwork, which is what we’re all about within our department and working with other city agencies.”

“I was really proud last year to promote her to deputy chief of administration where I think on top of her excellent career, she got a taste of what it is like to work and juggle different priorities. You shined in that role.”

Both Nicholson and Hayes-White will work on a transition plan in the coming weeks.

San Francisco Mayor London Breed has apologized after signing a certificate of honor for a controversial figure in Irish history.