Officials with the Salesforce Transit Center are aiming to reopen Fremont Street by Oct. 12 but a date to reopen the actual transit center remains up in the air.

When Fremont Street reopens, at least one lane of traffic will remain closed, the center lane, in which the shoring system is being erected.

“These jacks were brought in to just ensure that the bus deck was secure until we can get the actual shoring system that we’re in the process of designing right now and getting a peer review for.”

It will take at least a week to put the shoring system in place, said Turchon.

The two steel towers that will temporarily hold the transit center will come from the Stockton-based Herrick Corp., which fabricated the two beams are that cracked.

Turchon said there will be an independent peer review of the shoring system before installation.

Once the weight of the two cracked beams is shifted over to the two steel towers, engineers can begin testing of the cracked beams and figure out a permanent fix, said Turchon.

Testing of the cracked beams and devising a permanent fix could take another couple of weeks.

Officials with the Transbay Joint Powers Authority, who oversaw the constriction of the transit center and manages the center, will provide another update at a meeting at City Hall Tuesday morning. 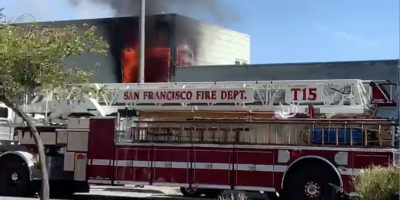 A motorcyclist who died following a crash Sunday night on a San Francisco highway has been identified as 19-year-old Caleb...