The Athletics, who finished 2017 committing a Major League-worst 121 errors, suffered their second error of 2018 in the third inning at the Oakland Coliseum Saturday.

Marcus Semien‘s bobble, though, was far from the only let-down felt by Oakland starter Daniel Mengden. Twice, ill-advised dive attempts by his outfielders allowed the Angels to lead off innings with extra-base hits instead of singles, both times yielding runs.

“That’s not what we’re expecting. … Obviously, the defense got a lot better as the game went along but Mengden didn’t deserve the fate that he got.”

Things got off to perhaps the sourest possible start for Mengden, making his first big league opening weekend start in front of 17,012 fans on MLB’s first-ever César Chávez day commemoration.

After serving up what appeared off the bat to be a lead-off single on his second pitch of the game, the Oakland starter was forced into a late sprint toward back-up position near the third base coach’s box when Stephen Piscotty‘s dive in right yielded no leather-to-leather contact.

The misplay by Piscotty was perhaps inconsequential, made such by a Mike Trout RBI double. Mengden got the next three to limit the damage, but was stung once again in the third. Melvin said that while the results hurt he liked his right fielder attempting to make a play early:

“I don’t mind Stephen going after that first one, maybe he hesitated just a little bit and it ended up getting by him but I want him to be aggressive.”

In a play eerily similar, but the other way, René Rivera was granted second by Khris Davis‘ whiffed dive. Things got a bit tougher on Mengden this time around, with Trout reaching reaching first on a wild pitch strike three. A Semien boot and Albert Pujols single later, the A’s found themselves down 3-0.

Los Angeles pushed one more across with Mengden on the mound in the fifth when Trout was chased home on a Pujols double. The Angels’ biggest inning, however, was a three-run outburst in the sixth, each scoring with Liam Hendriks on the mound, though two were charged to the starter.

Mengden’s afternoon was far better than the numbers say. He did allow seven hits but his one of his six runs allowed was unearned while, two resulted directly from defensive miscues and two more scored with Hendriks on the bump. He was able to limit free passes, walking just one, while whiffing five.

The skipper pointed to Mengden’s ability to work into the sixth and keeping the club in the game despite things being stacked against him as a positive. Catcher Bruce Maxwell, making his first appearance of the season, said Mengden’s command was particularly on point, adding that the hurler did well to work through the goings on around him:

“I think he managed it very well, kept a lot of poise on the mound and kept giving us chances.”

Mengden said it was simpler than one might think to do so:

“You have to control what you can control and that’s executing and making pitches. Stuff like that is going to happen.”

The Oakland offense finally pulled itself off the mat in the bottom half of the sixth, scaring up three of their _ hits and three runs knocking Shoemaker (W, 1-0, 4.76 ERA, 1.412 WHIP) out of the game. The Halo starter was saddled with four hits and three runs (all earned) while striking out four and walking four in 5-2/3 innings.

The A’s tried to claws their way back in the seventh, loading the bases with two for Matt Olson. But the second-year phenom took a called strike three — a fastball down and away — from former Athletic Jim Johnson

Davis and Matt Chapman were the only two A’s to find consistent success against the Angels Saturday, getting two hits apiece, though Piscotty’s lone hit sent home a pair of Oakland runs. Trout, though, continues his rebound from an 0-for-6 Opening Day going 3-for-4 with two runs and two RBIs.

Early offense continues to be evasive for the A’s, who have scored six of their 10 runs thus far this season in the sixth inning or later. But Melvin is not worried:

“It’s still only three games. I think we’ll have some games where we’ll score some runs early.”

Oakland will look to split a four-game season-opening series with the Angels for a second-consecutive season when they send Daniel Gossett (4-11, 6.11 ERA, 1.609 WHIP last season) to the mound against highly-anticipated Japanese pitching prospect Shohei Ohtani. Gossett is 0-1 with a 2.70 ERA in one start against Los Angeles.

The A’s completed a trade with the Cardinals for relief pitcher Josh Lucas, sending starting pitcher Casey Meisner to St. Louis in exchange. Lucas made five appearances in the major leagues last season, allowing three earned runs in 7-1/3 innings of work (3.68 ERA). Meisner has yet to pitch above the Double-A level. The A’s designated infielder Nick Noonan for assignment to make room for Lucas on the 40-man roster, according to John Shea of the San Francisco Chronicle. … Matthew Joyce was moved from left field to designated hitter in the starting lineup after rolling his left ankle running the bases Friday night. Neither Joyce or manager Bob Melvin are concerned about his long-term status. … The A’s celebrated César Chávez Day, hosting more than 200 members of the activist’s family. … Angel reliever Luke Bard, 27, made his major league debut Saturday after five seasons in the minor leagues. He gave up one hit and struck out two in a scoreless ninth. 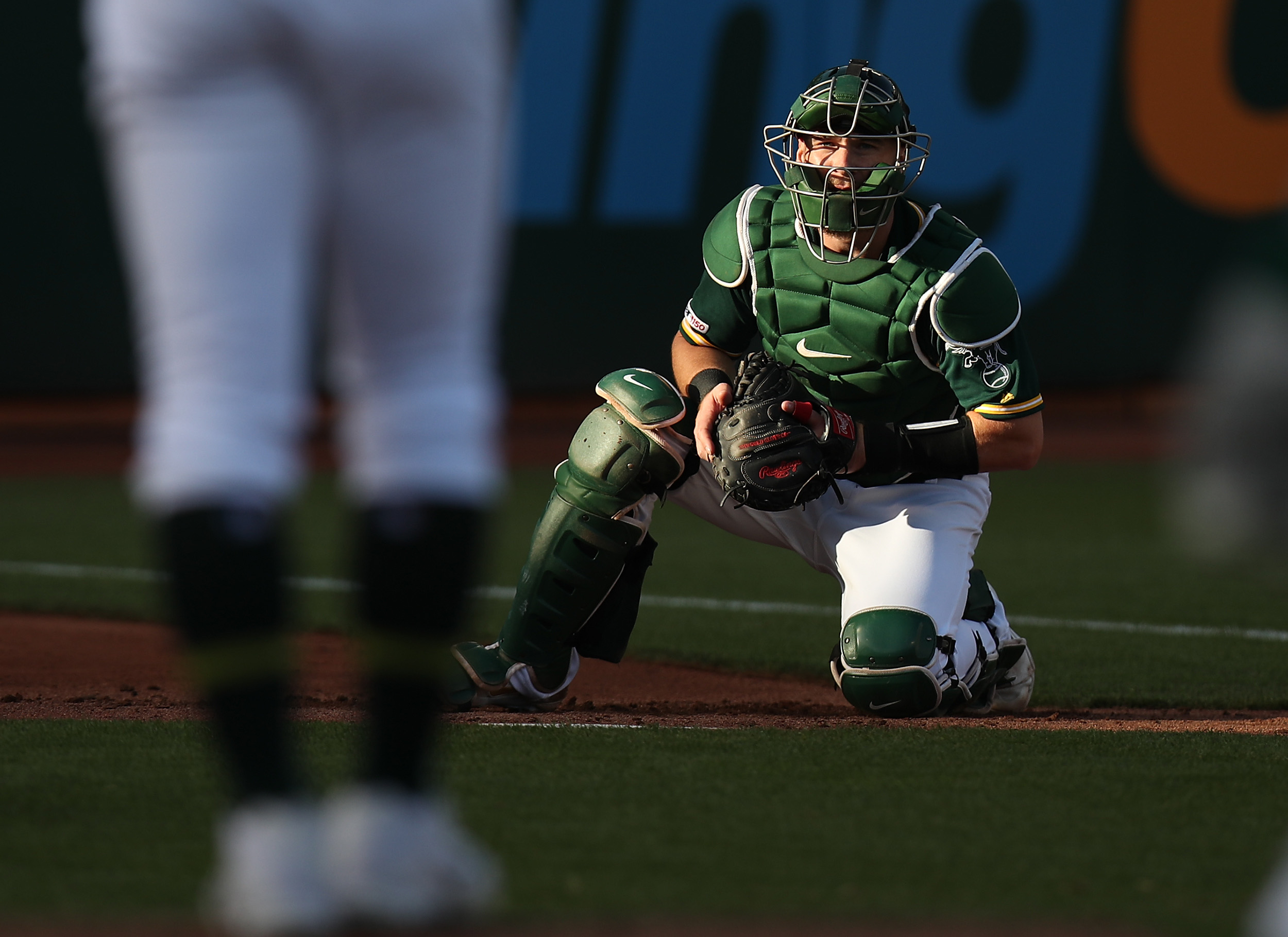