Scrubbing toilets and hosing down feces-splattered public bathrooms is the last job any 75-year-old deserves.

But behind SB40 restaurant at Pier 40 on the Embarcadero, when customers complain, it’s sometimes left to owner Benito Solis to clean a set of public restrooms reviled as “disgusting” and “incredibly filthy” by Yelp commenters.

Officially, upkeep of the Pier 40 restrooms — accessible both through an outside entrance and via a door at the back of the restaurant — has been the responsibility of the Port of San Francisco since 2010, said Renée Dunn Martin, Port spokesperson.

Yet for years, Hardy Barles, co-manager of SB40, tells SFBay, the Port has ignored repeated requests to better maintain and supply the bathrooms, or clean them more than once per day, forcing restaurant staff — including “Uncle Ben” — to dive in:

“People think that it [the bathroom] is part of our restaurant. If you want to be a successful business, take care of the bathroom first. … A couple might come here, have a drink, and after the lady goes to the restroom, she’s like ‘let’s go.’ They go somewhere else, because guess what? They’re disgusted by the restroom.”

SB40, the successor to Carmen’s in a 60-year legacy as the first Filipino-American restaurant on San Francisco’s waterfront, will close its doors October 31 after they say they were pressed by the Port into closing.

In a statement Thursday, the Port said:

“The owners of Carmen’s have not complained to Port staff, the Port Director or the Port Commission about being treated unfairly or pressured to terminate their lease with the Port.”

At $1.16 per square foot per month, SB40’s rent at Pier 40 is by far the lowest among comparable Port tenants, Port spokesperson Martin told SFBay:

“Throughout the history of our business relationship, the Port has treated SB40 fairly and Port staff has made every attempt to be supportive of this local small business enterprise.”

Barles, though, told SFBay that years of neglect by the Port of the bathrooms, along with being denied revenue opportunities enjoyed by other Port tenants — like outdoor service of beer and wine — are examples of what he called being “pushed” by the Port toward shutting their business.

The Port said Carmen’s had “struggled financially” over its entire time at Pier 40. (The Port became Carmen’s landlord in 2012, succeeding the San Francisco Redevelopment Agency.) They also said they had:

“… worked hard to assist Carmen’s with improving their business performance at their Pier 40 restaurant. … The Port has demonstrated its intention to work with Carmen’s owners to improve their performance to a standard whereby they could stay in place and obtain a new lease…”

The owners defaulted on their lease in 2011 by filing for bankruptcy after “often” being delinquent on rent payments, according to the Port and court documents obtained by SFBay.

In a settlement filed in U.S. Bankruptcy Court, the owner of Carmen’s/SB40, Benito Solis, acknowledged $30,700 in back rent owed to the Port and agreed to monthly payments of $1,500 to repay the debt and cure the bankruptcy claim.

The back rent was among what Solis told SFBay was around $180,000 in debt that led to the Chapter 13 bankruptcy, including federal and state taxes, and payments to suppliers. Chapter 13 bankruptcy allows debtors to reorganize, rather than simply discharge, unaffordable debt.

Solis said the mountain of debt was created by a series of managers hired after Carmen Ferrer Solis, owner of Carmen’s since 1957, was diagnosed with breast cancer in 2006 and became unable to work. She died in 2012.

Benito Solis, overwhelmed with operating the business without Carmen, brought in a series of managers from outside the family. Solis sued Frances Torres, alleging she said failed to make tax and rent payments while pocketing revenue from the restaurant as manager beginning in 2006. In 2008, a judge awarded Solis a $44,324.96 default judgment against Torres. The judgment was never collected, Solis said.

Solis’ bankruptcy settlement with the Port amended the lease to expire in April 2013. Since that time, under current co-managers Hardy and Rejilyn Barles, SB40 has been under a month-to-month arrangement, and has been current on all rent and back rent installment payments, according to the Port.

Despite remaining current on its rent, the Port in 2014 denied a request from SB40 to sell beer and wine in a 500-square-foot outdoor seating area because they were not a “tenant in good standing.” The Port wrote:

“The fact that you are a month-to-month tenancy making stipulated delinquent rent payments at the direction of a bankruptcy decision precludes you from qualifying as a tenant in good standing.”

Meanwhile, the condition and cleanliness of the bathrooms, Rejilyn Barles said, has been brought to the Port’s attention repeatedly for years, with little or no improvement. Port spokesperson Renée Dunn Martin said the bathrooms are scheduled for daily cleaning by contract janitors, with on-call staff available for extra cleaning.

When SFBay visited the restrooms on a recent weekday afternoon, the women’s toilet was clogged with feces, with only part of the toilet seat present. The toilet seat had been observed in that condition since at least mid-September.

A toilet in the women’s public restroom at Pier 40 along the Embarcadero in San Francisco, Calif. is seen on Tuesday, October 3, 2017. Upkeep of the restrooms is the responsibility of the Port of San Francisco.

Barles provided SFBay with an e-mail from a major San Francisco commercial real estate firm, which, after holding four corporate events at SB40, complained about the restrooms before failing to renew their booking with the restaurant. Barles said:

“When there wasn’t a game, it was our bread and butter. Corporate events, Christmas parties. But it’s been three years at least. She told me one of her clients got in an argument with a homeless lady in the bathroom. … What can I do, kick her out? Technically I can’t, it’s a public restroom.”

Hardy Barles and Solis told SFBay that restaurant staff — currently consisting entirely of family members — frequently have to clean or hose down the restrooms themselves to maintain even a minimum level of sanitation:

“A customer will come up and talk to me about the restroom. I don’t want to argue, I tell ‘Uncle Ben,’ can you take care of the restroom?”

“We will fight to the very end. We want Carmen and her reputation to be remembered. She was a kind person who was known by the Longshoremen whom she helped during the strike in the 1960s. The young Filipino-Americans need to understand this.” 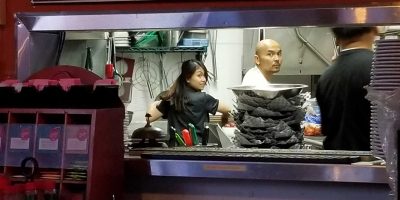