A new social app has launched in San Francisco with a catch: You have to get sweaty to use it.

Instead of building another gym where people plug in their headphones and unplug from the world, fitmob created an app-based workout regime that connects users with workout partners.

In a city less than 47 square miles across with 800,000 people living on top of each other, it shouldn’t be difficult to make a human connection.

San Franciscans, however, seem more likely to be immersed in their cell phones than interacting face-to-face.

What makes fitmob different is that workouts are structured to bring users together — as workout partners, and as a community.

Young professionals working at San Francisco’s tech companies can rub shoulders with hipster college students in Dolores Park or take a trip across town to workout with the Marina ‘bros’ on the waterfront.

Emily Gregg, launch leader for the Marina and instructor of the class she calls “better than therapy” said fitmob is about partner work and meeting new people.

“People go out drinking and eat fried food because there’s no healthy option for social activity. Most of the people who come here aren’t going to go have a donut.”

For sessions like “weapons of ass reduction,” “twerkout conditioning,” and “guru gone wild,” fitmob bills users each week based on how many workouts they’ve attended. One class a week is $15, two cost $10 each and three workouts are a mere $5 each.

Headquartered in SoMa, fitmob splashes its cement walls with bright posters and slogans like “have fun.” Its employees — of course — share office space with a workout room.

Eventually, the company plans to blanket the city in what Kapoor describes as “pop up spaces” or areas of the city that can be used as impromptu exercise areas. 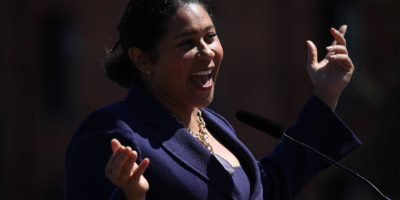 ORACLE ARENA — The Warriors blew an 18-point lead as the Cavs surged to the upset win.