Every team looks for a leader, a backbone, somebody that makes his teammates better.

The Giants found that player in the first round of the 2008 amateur draft when they selected Buster Posey with the No. 5 overall pick. It was a franchise-changing selection. The four teams that passed on him probably wish they hadn’t.

Posey has caught the final strike of two World Series, but on Thursday, his importance to the Giants was recognized by the media as he won the 2012 National League MVP. He received 27 of the 30 1st place votes (422 total points) and beat out Ryan Braun, Andrew McCutchen and Yadier Molina for the award.

Posey was interviewed on MLB Network moments after it was announced that he won:

“It’s tough to put into words. It’s an accomplishment that is shared with the whole Giants organization. … I couldn’t be more honored to put my name alongside the previous winners.”

#SFGiants GM Brian Sabean on Buster Posey MVP: “This is a great achievement and I couldn’t be happier for Buster."

Bochy: "To go through what he’s gone through over the past year and then do what he did in 2012, not many people can do that."

Sabean on Posey: "He is establishing himself as one of the premier athletes in baseball today."

Posey is the first Giant to win the MVP since Barry Bonds in 2004 and is the first National League catcher to win the award since Johnny Bench in 1972. Posey finished with a Major League leading .336 batting average, 24 home runs and 103 RBI.

If Buster Posey wins NL MVP, he'll join Bench & Munson as the only catchers to win the MVP, Rookie Of Year & World Series in their careers.

Even the most optimistic analyst could not have predicted Posey would have had such an incredible season. A batting title? An MVP? 148 games played? 112 games at catcher? I would have been happy with just 120 games played and no setbacks from his gruesome leg injury.

Other players may be the emotional leaders, pumping the team up with rah-rah speeches and hijinks, but Posey is the heart of the team. Without him, they may not have won the World Series in 2010 or 2012.

His emergence in 2010 pushed the Giants to the title. An out-of-control Scott Cousins effectively derailed the Giants playoff hopes in 2011. Posey’s return in 2012 slowly got the Giants back on track. His value can be measured over the last three seasons and the fate of the Giants seasons.

He’s a great offensive player, but a lot of Posey’s value come from how well he’s managed the pitching staff over the last three years. In 2010, Posey had a 3.19 catcher’s ERA. He didn’t catch enough games to qualify among league leaders, but his catcher’s ERA was lower than league-leader Yadier Molina.

In 2011, he had a 3.36 catcher’s ERA before he got hurt. That would have been good enough for 2nd in the majors. In 2012, Posey finally caught enough innings to qualify and he finished with a 3.52 Catcher’s ERA, fourth among all catchers in the majors. He’s a calm, steady force on the field and he makes the Giants pitchers’ job easier.

Posey has been a driving force behind the winning culture that has developed in the Giants clubhouse. He is the heart and soul of the Giants. He’s a quiet leader.

He was great when he won Rookie of the Year. We all knew that. But now he’s greatness has been re-affirmed by winning the MVP. 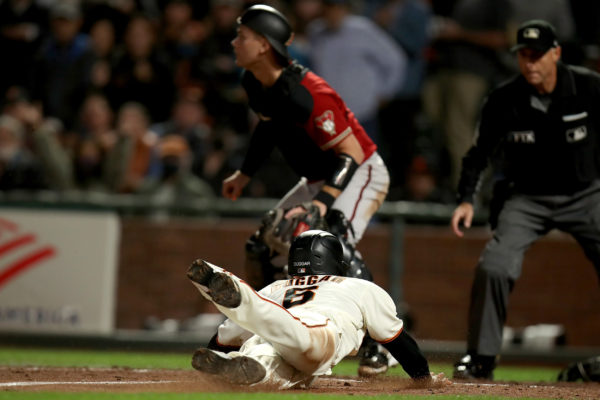