Before you make that next phone call, you might want to ask yourself if that’s something you want the FBI to hear.

San Francisco Mayor Ed Lee vetoed legislation this week that would have banned the SFPD from conducting surveillance on average citizens alongside the FBI.

In 2007, the SFPD secretly agreed to a Memorandum of Understanding to cooperate with the FBI and came under fire for it shortly thereafter. The deal allowed SFPD officers to work directly with the FBI without  the inconvenient constraints of local privacy and civil rights restrictions.

After the lid was blown off the secret deal, the SFPD issued a general order that directed officers to comply with local restrictions. But opponents — and six members of the Board of Supervisors — feel that simply isn’t enough.

Lee said that his main priority when vetoing the ordinance was the safety of residents:

“Recently, the United States Department of Homeland Security raised San Francisco’s risk rating – we are now considered the fourth-highest terrorism target risk in the nation along with cities like New York and Washington, DC. Protecting San Franciscans is the most important responsibility I have as Mayor. This goal, however, does not justify a trampling of constitutionally protected principles, and we have a government structure in place to ensure this dichotomy never materializes.”

Activists like Shahid Buttar, executive director of the Bill of Rights Defense Committee, said he is disappointed in the veto, but is feeling optimistic about working with the mayor:

“It’s disappointing that Mayor Lee would choose to overrule the voice of residents of the city and their representatives on the Board of Supervisors.”

Supervisor Jane Kim, who supported the vetoed ordinance, proposed a consensus ordinance, which Lee said he will support.

Oakland trash getting out of hand 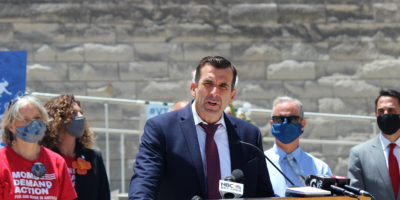 Oakland trash getting out of hand

Couches, uprooted marijuana plants, and a dead Chihuahua wrapped in plastic: Just an average day of trash on Oakland streets.