As with many other health food fads like organic, free-range, and raw food, the popularity of sustainably grown meat has increased dramatically in progressive communities like the East Bay.

Now East Bay health nuts can shop at Marin Sun Farms and The Local Butcher Shop, which sells meat from grass-fed animals that were raised on Northern California pastureland. Also, more local restaurants have jumped on the bandwagon and are now offering locally-grown, pasture-raised meat as well.

What’s all the hype about? More animals are raised under sustainable and humane farming practices, so more people, including previous vegetarians, are feeling better about eating animal meat.

Aaron Lander, a sales manager at Marin Sun Farms butcher shop in Rockridge, agreed that he is happy if his cow was happy. He told the East Bay Express:

“I was a vegetarian for six or seven years. I grew up in Iowa; all the cows there are pumped full of hormones. … So when I was in college, I decided there was no way I was going to eat meat: ‘I’m going to become a vegetarian.'”

But then, after hearing about happy animals being taken care of in happy facilities, roaming the land freely, he had a change of heart. Er, stomach. He said:

“Now, I’m a carnivore, but only for [meat from] Marin Sun Farms.”

Research has also shown that pasture-raised meat has much less fat than factory-farmed meat, especially fats that are unhealthy for humans.

Now that we have all these technical terms, what is the difference between pasture-raised grass-fed meat and organic free-range meat? Basically, lax government standards allowed organic and free-range labels to be used incorrectly.

This includes so-called organic cows that were still housed in factory-farm-like conditions, packed shoulder-to-shoulder in tight living quarters. Also, they would feed them organic corn and feed, but this was making them sick because cows actually digest grass better.

The same goes for free-range chickens, who are only required to have “access” to the outdoors. That doesn’t mean they are ever put outdoors.

Which leaves us with pasture-raised, grass-fed cows, pigs, and chickens that actually do spend most of their days outdoors on open pastureland.

If you’re looking for local meat, The Local Butcher Shop receives its meat from small sustainably run farms that pasture their animals within a 150-mile radius of Berkeley. Also, Marin Sun Farms, gets their meat from a cooperative of pasture farms in the North Bay.

So stay away from the pink slime and move onto some happy meat. 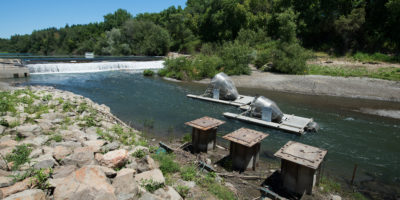