UPDATE: According to Evan Grant of the Dallas Morning News, MLB has changed its mind and will invite Dirk Nowitzki to throw out a first pitch at one of the World Series games in Texas.

During the regular season, Major League Baseball teams can have anyone throw out the ceremonial first pitch. But during the World Series, teams must have their selections approved by MLB officials.

On Wednesday, MLB rejected the Texas Rangers’ nomination of Dallas Mavericks star and NBA Finals hero Dirk Nowitzki. The Rangers had Nowitzki throw out the ceremonial first pitch during a regular season game against the Mets in June, and had hoped to have him do the same prior to one of the World Series games this weekend. 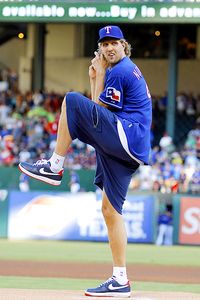 Dallas Mavericks star Dirk Nowitzki throws out the first pitch prior to June game between the Texas Rangers and the New York Mets.

Tracy DeLatte of KDFW-Fox4 reported that there is speculation that “MLB officials denied Nowitzki the opportunity because of the lockout, saying they wanted to support their NBA counterparts” but that league officials are denying that allegation, saying they wanted someone with “broad-base national appeal.”

Raiders fans woke up this morning to the news that they had a new quarterback. Carson Palmer was acquired by...