The Warriors are back. Back to that familiar place.

It took one more game than truly necessary, but after a 120-110 win to finish off the Dallas Mavericks Thursday, the trio of Stephen Curry, Klay Thompson and Draymond Green are back to the NBA Finals for the sixth time in eight years.

Golden State had that look in their eyes from the jump, the look that they knew exactly what was on the line and how to finish off the Mavericks.

Steve Kerr tried to put in perspective what this trip back to the Finals means for this team:

It’s so difficult to get to the Finals. An NBA season is such a marathon, to get through the 82, to get through three rounds of the Playoffs, beating the best teams in the league to get there, it’s frankly exhausting. It’s stressful, emotional, physically tiring, all of that stuff. For our team, our guys, especially the core group, Dray and Steph, Klay, Loon, Andre, to be part of that six times in eight years, I don’t even know what to say. It just takes an enormous amount of skill and determination and work.”

Curry only took four shots in the first half, and finished as the fifth leading scorer for the Warriors with just 15 points, but he was setting up teammates with a purpose.

He had nine assists and more importantly just two turnovers.

Thompson picked up the scoring slack, splashing in 32 points and was unconscious at times, throwing in eight 3-pointers.

Kerr talked about how happy he was to see Thompson back in the Finals:

I’m happy for everybody. I could go down the list. Each player has a unique individual background and story. I’m happy for all of them. It’s hard not to be most excited for Klay, given what he’s been through. The two-year absence, the fight that he’s been through to get back to this point. Just incredible accomplishment for him. For him to be a part of it, he’s so happy again. It’s wonderful to see.”

It’s a sentiment shared by everyone on the Warriors who spoke after the game. Everyone mentioned Thompson and his journey back. And you could tell how much it meant to him as he got emotional when he was interviewed on the court postgame.

It carried over when he spoke at his press conference:

Just such a surreal feeling. It’s hard to put into words really. This time last year, I was just starting to jog again and get up and down the court. Now to be feeling like myself, feeling explosive, feeling sure in my movements, I’m just grateful.”

Green quarterbacked an energized defense that held Luka Doncic to just two field goals in the first half, while forcing him into four turnovers.

But to relegate Green’s contributions to the defensive end would be a huge disservice.

When he’s aggressive, this team hums at a rate that seems untouchable by any other team in the NBA.

And it’s no coincidence that with a trip to the NBA Finals on the line, they got the old, aggressive Draymond. He had 17 points on 6-of-7 shooting, and even hit a 3.

Those numbers might not seem all that impressive for a former All-Star, but those 17 points represent Green’s highest scoring total since April 12. Of 2021.

Green said that when this trio is healthy, he has the upmost confidence in them:

I’ve always said all along, no one has proven they can beat us yet when we’re whole. That’s still the case.”

This game was more than just the big three though, Kevon Looney continued his impressive playoff stretch of closeout games with 10 points and 18 rebounds.

Looney has gone from token starter at center to a legit impact big during this postseason.

He’s leading the league in offensive rebounds during the playoffs and continues to dominate the glass night after night.

For a team whose lack of depth at center was their weakness headed into the playoffs, Looney has given them more than they could have asked for or imagined.

And he’s not the only bench big to make an impact.

Nemanja Bjelica played a total of five minutes through the first three games of this series and saw 15 minutes in Game 4 because it was a blowout before the fourth quarter.

Bjelica was the second player off the bench for Steve Kerr and the Warriors Thursday and, while his statline of five points and six rebounds might not wow you, he made a positive impact every second he was on the court.

Kerr joked that he should have probably seen minutes earlier in the series:

If I was a little smarter I would have played him a little earlier in the series. Honestly he’s such a good basketball player. He understands the game. The ball moves when he’s out there. Did a great job defensively tonight. But those minutes were huge.”

He was moving the ball on offense, creating looks for others with his cuts and passing, he was boxing out, and he was locking up Doncic.

No that’s not a typo, Bjelica stoned Doncic almost every time he found himself matched up on him and was a big part of why the All-NBA First Team selection could not get anything going early.

In fact, at one point Doncic was calling for screens when he had Bjelica matched up on him on the perimeter to get the Warriors big off of him.

It’ll be a little shocking to see Bjelica get meaningful minutes in the Finals against the athletic Celtics or the Heat, but after this performance, who knows.

What is for certain though, is that after three long years away from the bright lights, this core is back where they feel they belong. Back to being a dynasty. And it’s hard to argue with them.

The NBA Finals begin Thursday June 2, with the first game being at Chase Center regardless of who comes out of the East. Now the Warriors wait to see if the Boston Celtics can finish off the Miami Heat or if they’ll force a Game 7 in South Beach.

Stephen Curry was presented with the first-ever Magic Johnson Western Conference Finals MVP trophy by former Warrior Shaun Livingston. … Moses Moody has the confidence of Steve Kerr and looks like he may have locked down a rotation spot in the NBA Finals depending on the injury outlooks for Andre Iguodala and Gary Payton II. The 19-year-old rookie had seven points in his 11 minutes of action Thursday. 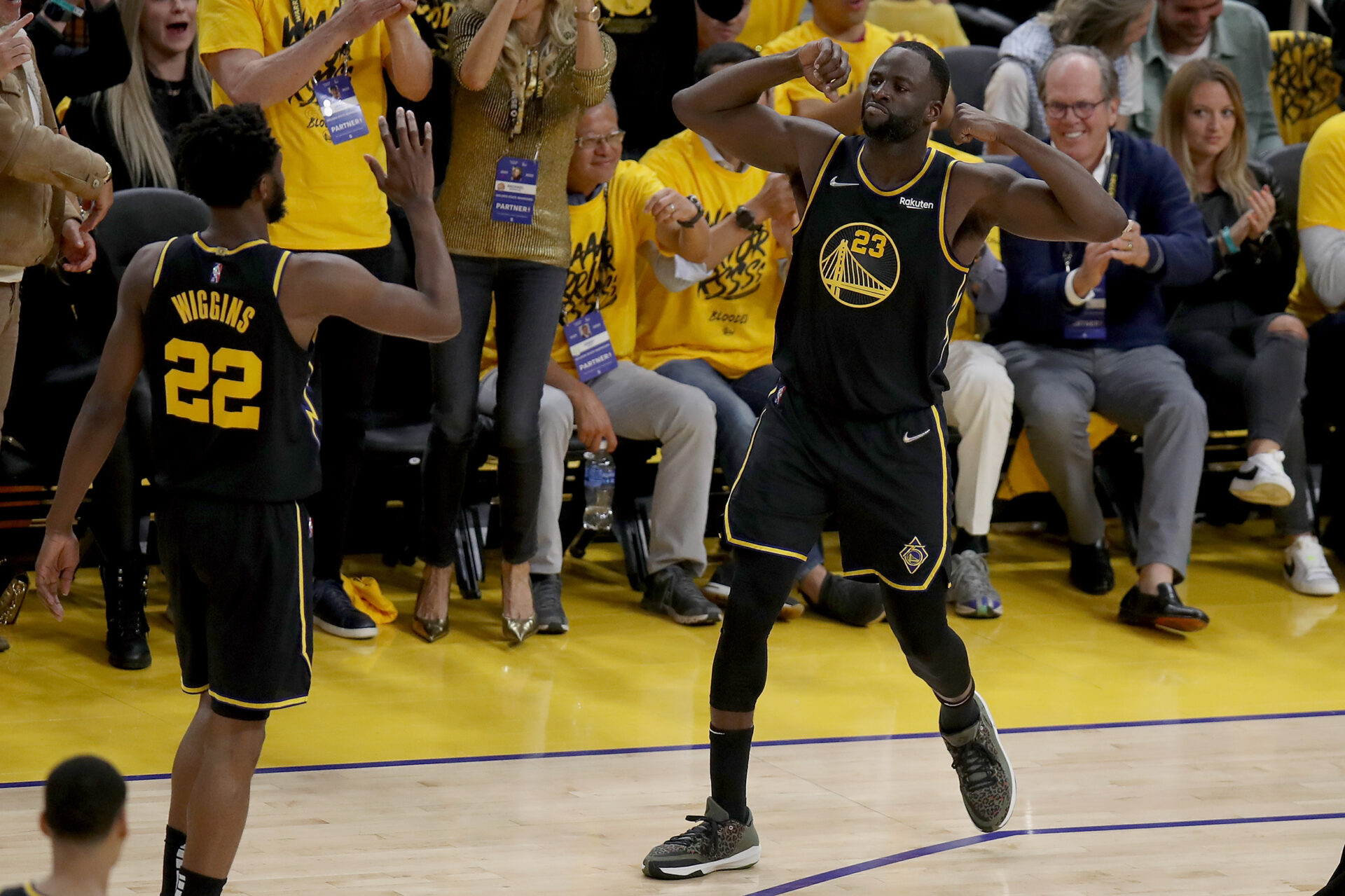 Golden State Warriors forward Draymond Green (23) reacts after scoring in the first half during Game 5 of an NBA basketball Western Conference finals game in San Francisco on Thursday, May 26, 2022. (Scot Tucker/SFBay.ca) 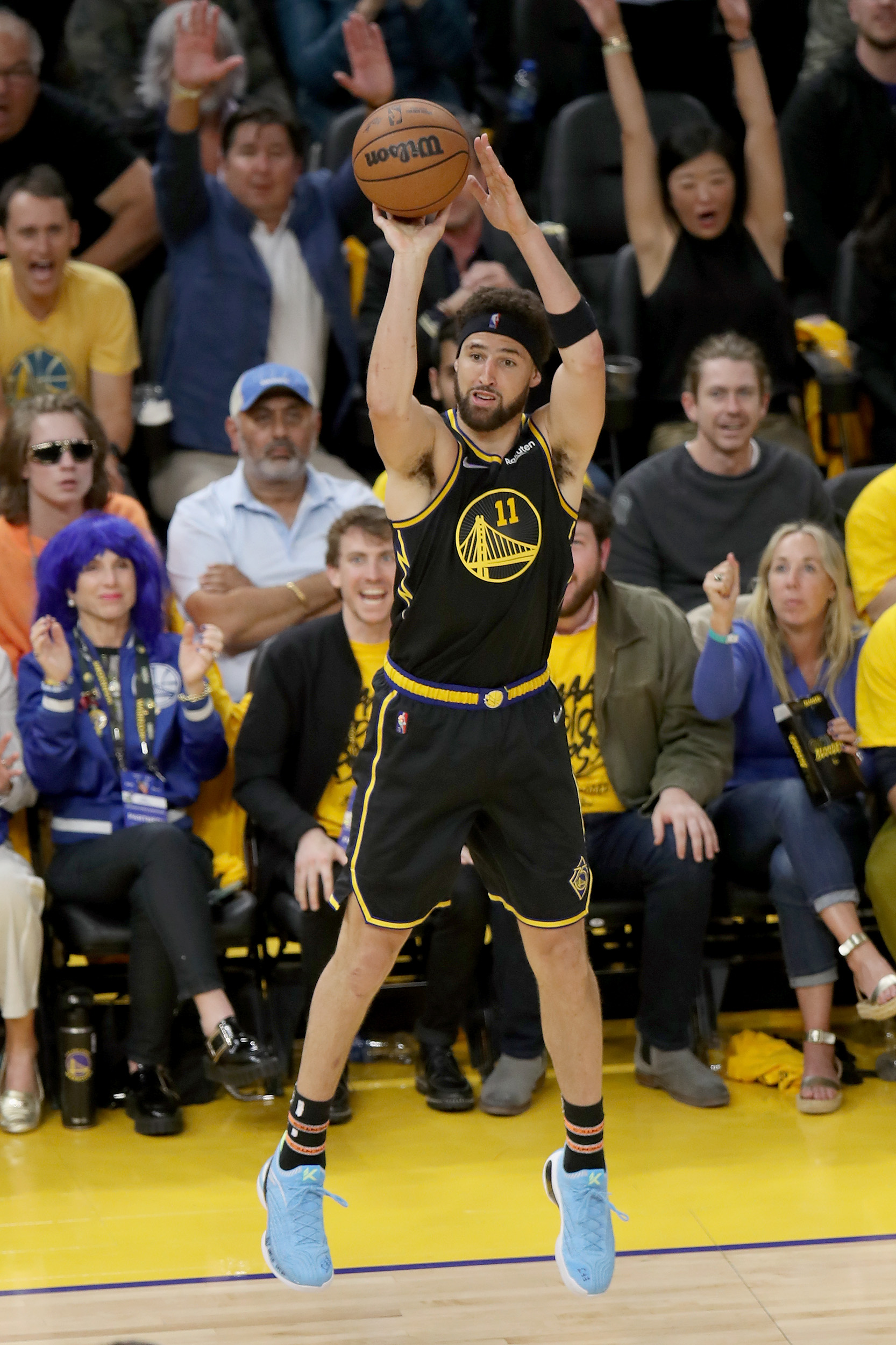 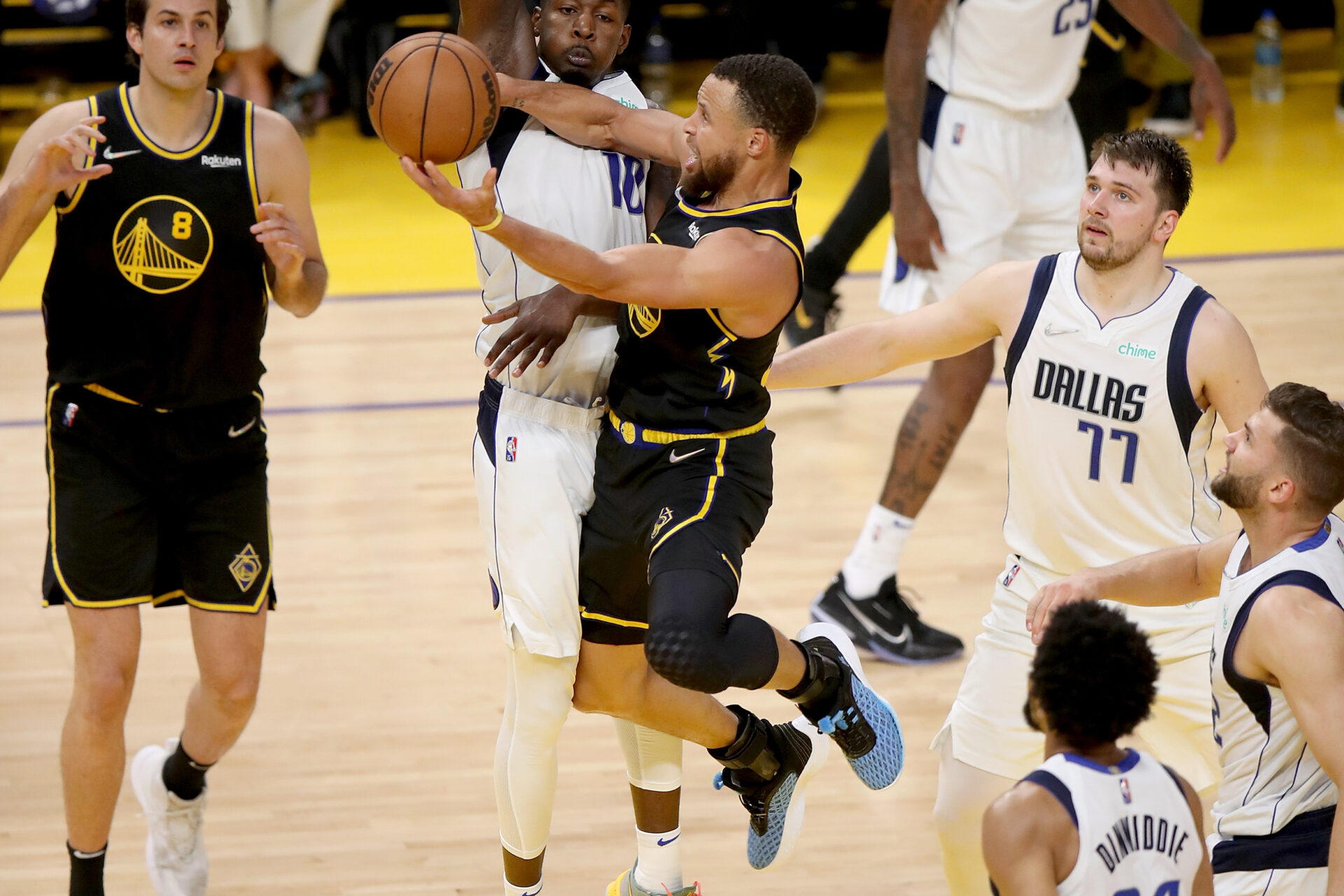 Golden State Warriors guard Stephen Curry (30) drives to the hoop in the second half during Game 5 of an NBA basketball Western Conference finals game in San Francisco on Thursday, May 26, 2022. (Scot Tucker/SFBay.ca) 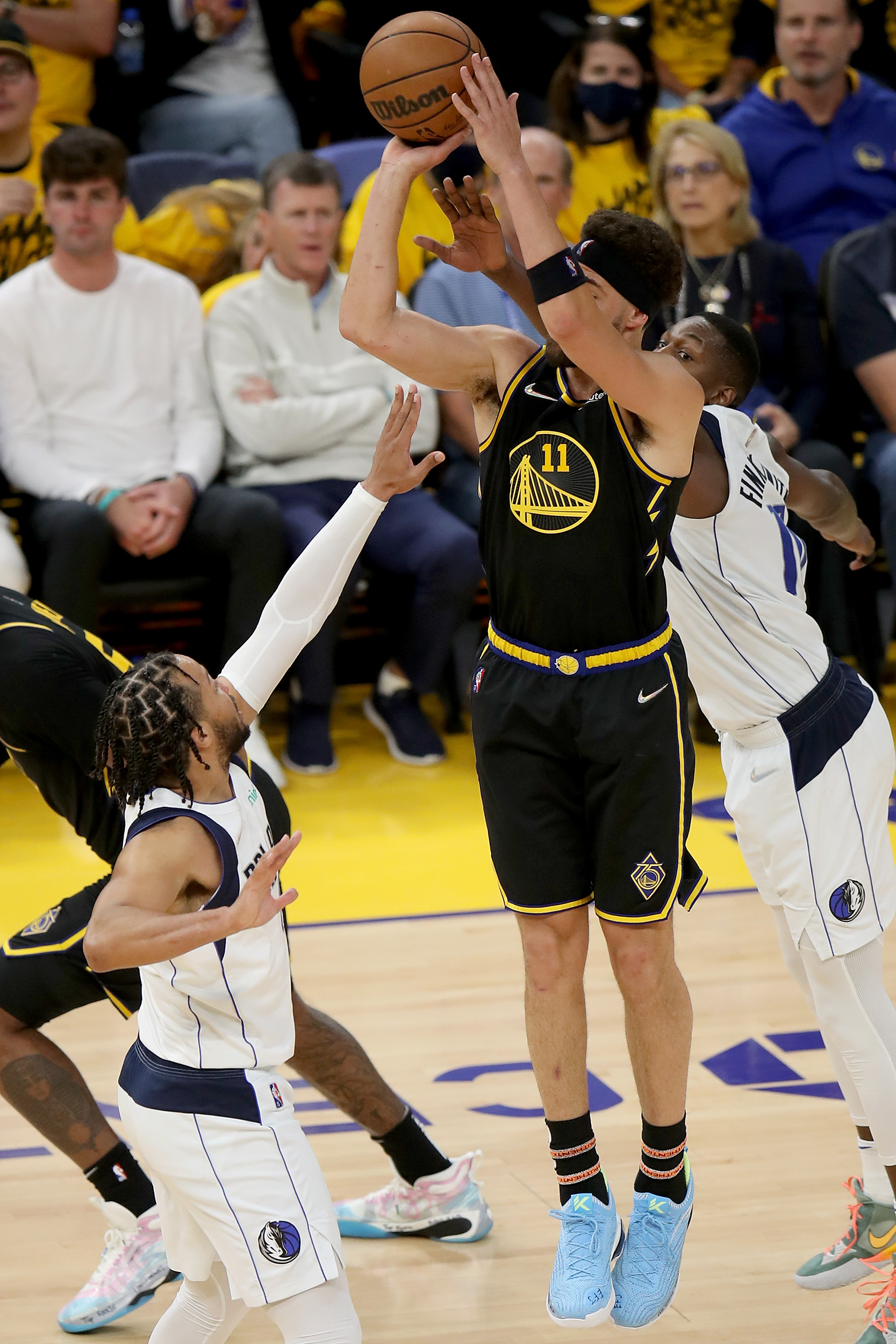 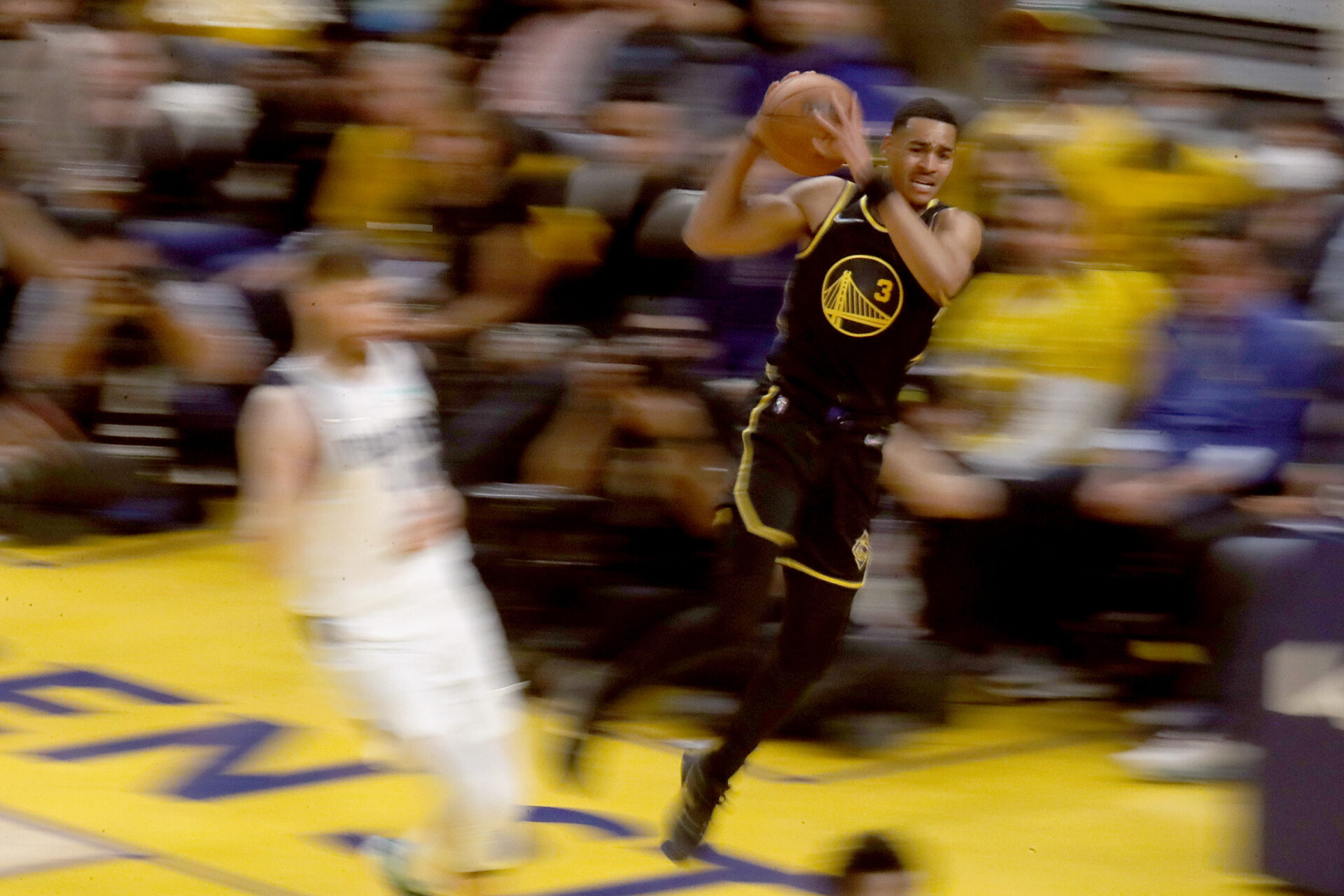 Golden State Warriors guard Jordan Poole (3) looks to pass as he is fouled in the first half during Game 5 of an NBA basketball Western Conference finals game in San Francisco on Thursday, May 26, 2022. (Scot Tucker/SFBay.ca) 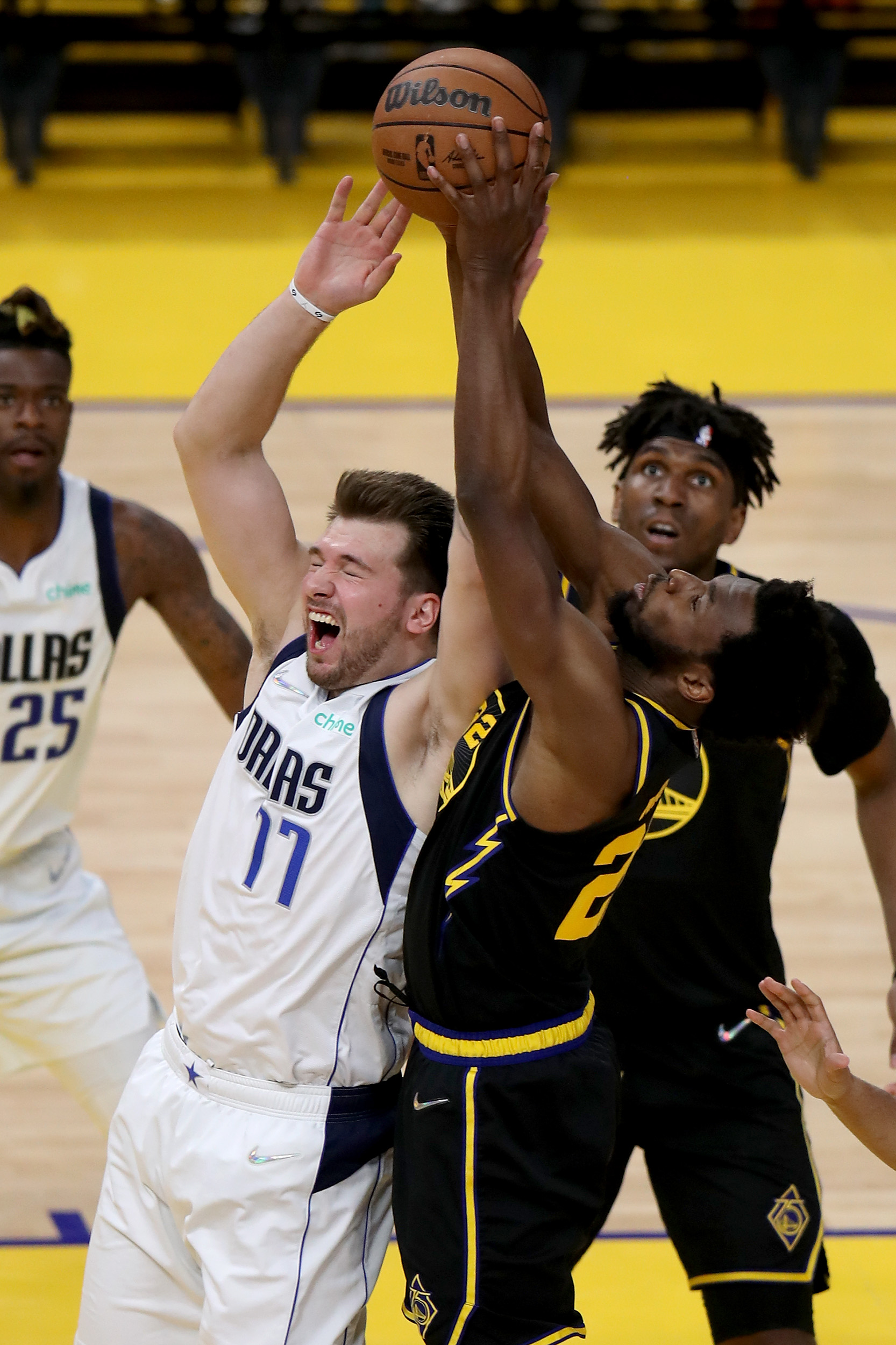 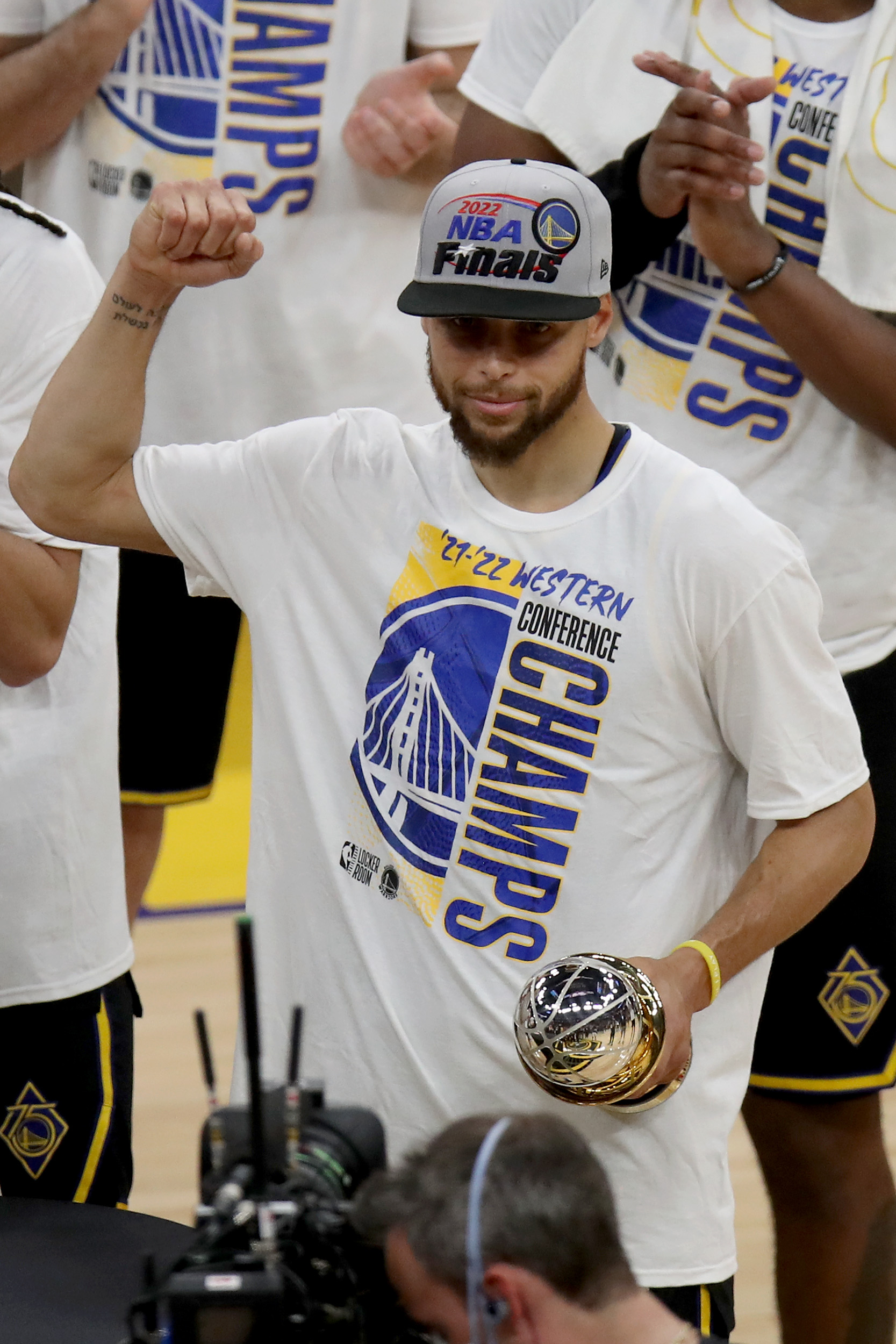 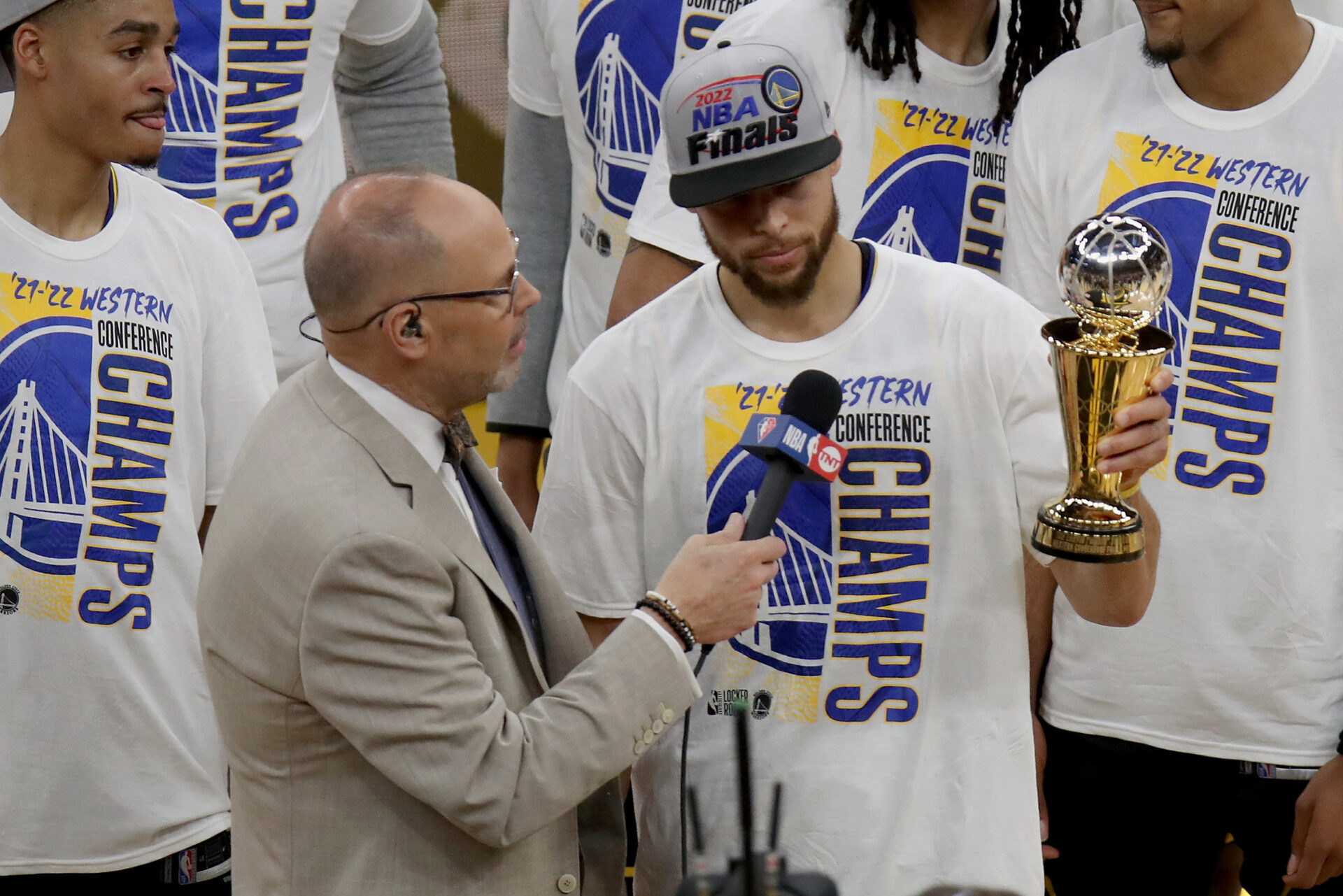 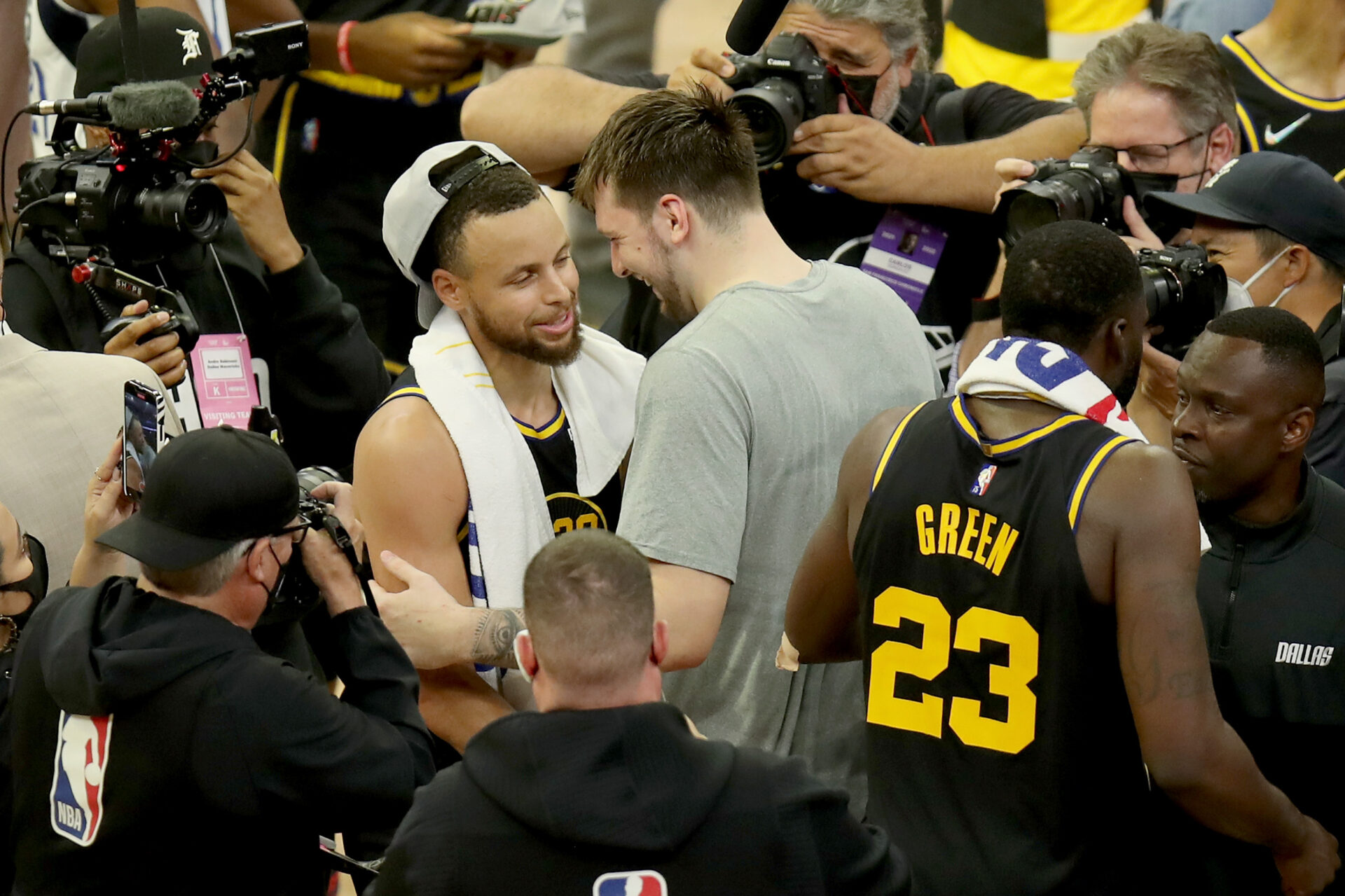 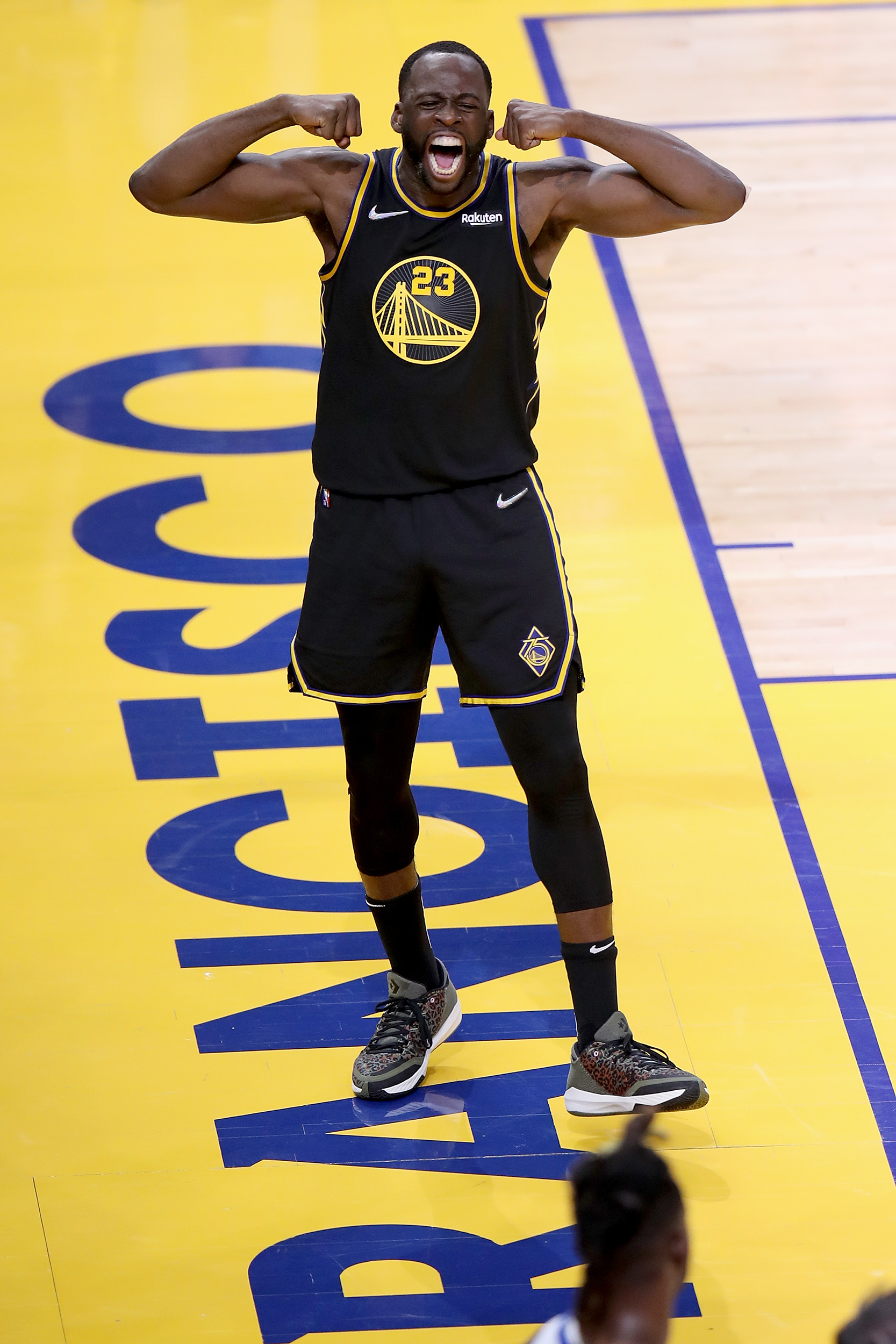 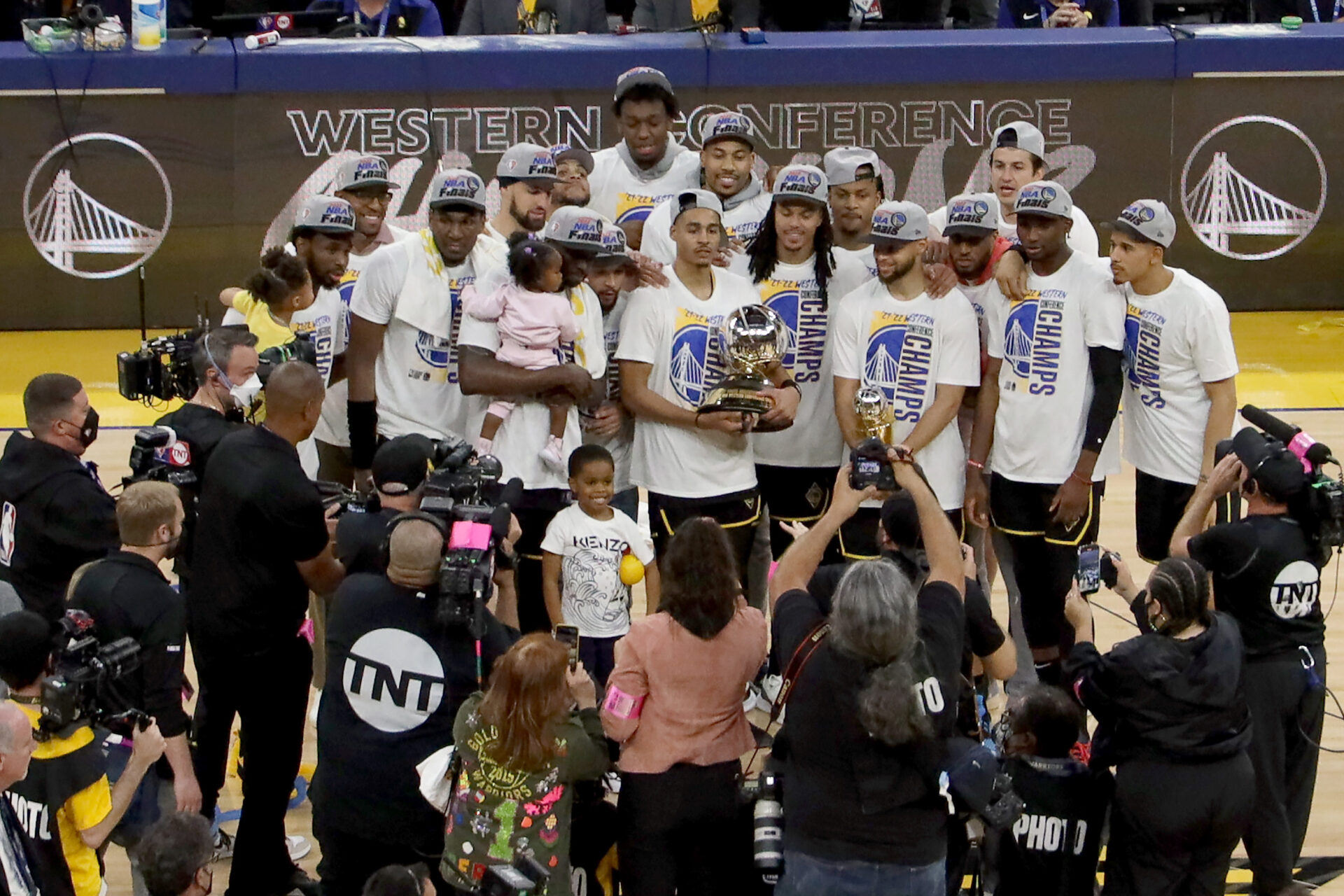 The Golden State Warriors celebrate a 120-110 victory over the Dallas Mavericks in Game 5 of an NBA basketball Western Conference finals game in San Francisco on Thursday, May 26, 2022. (Scot Tucker/SFBay.ca) 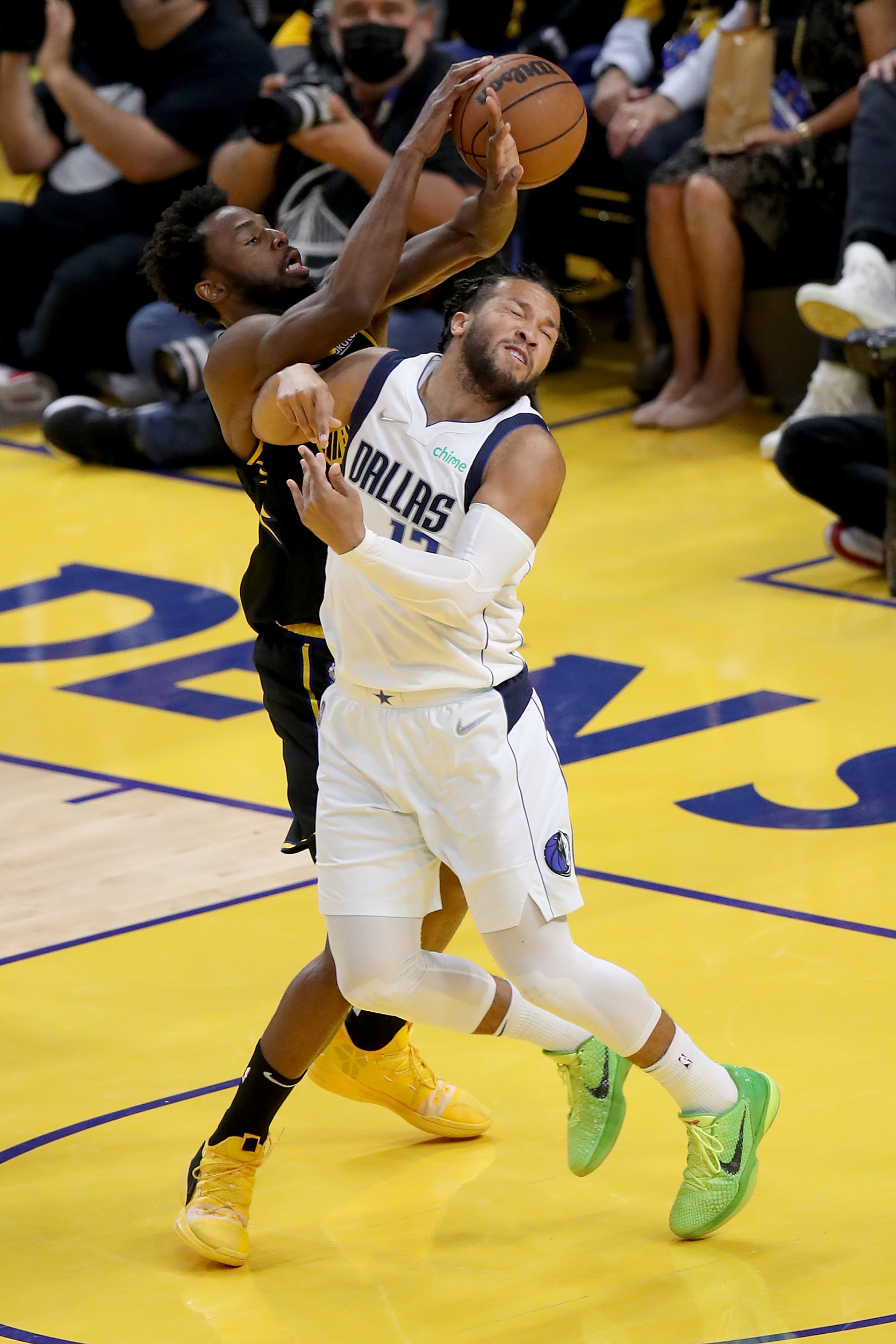 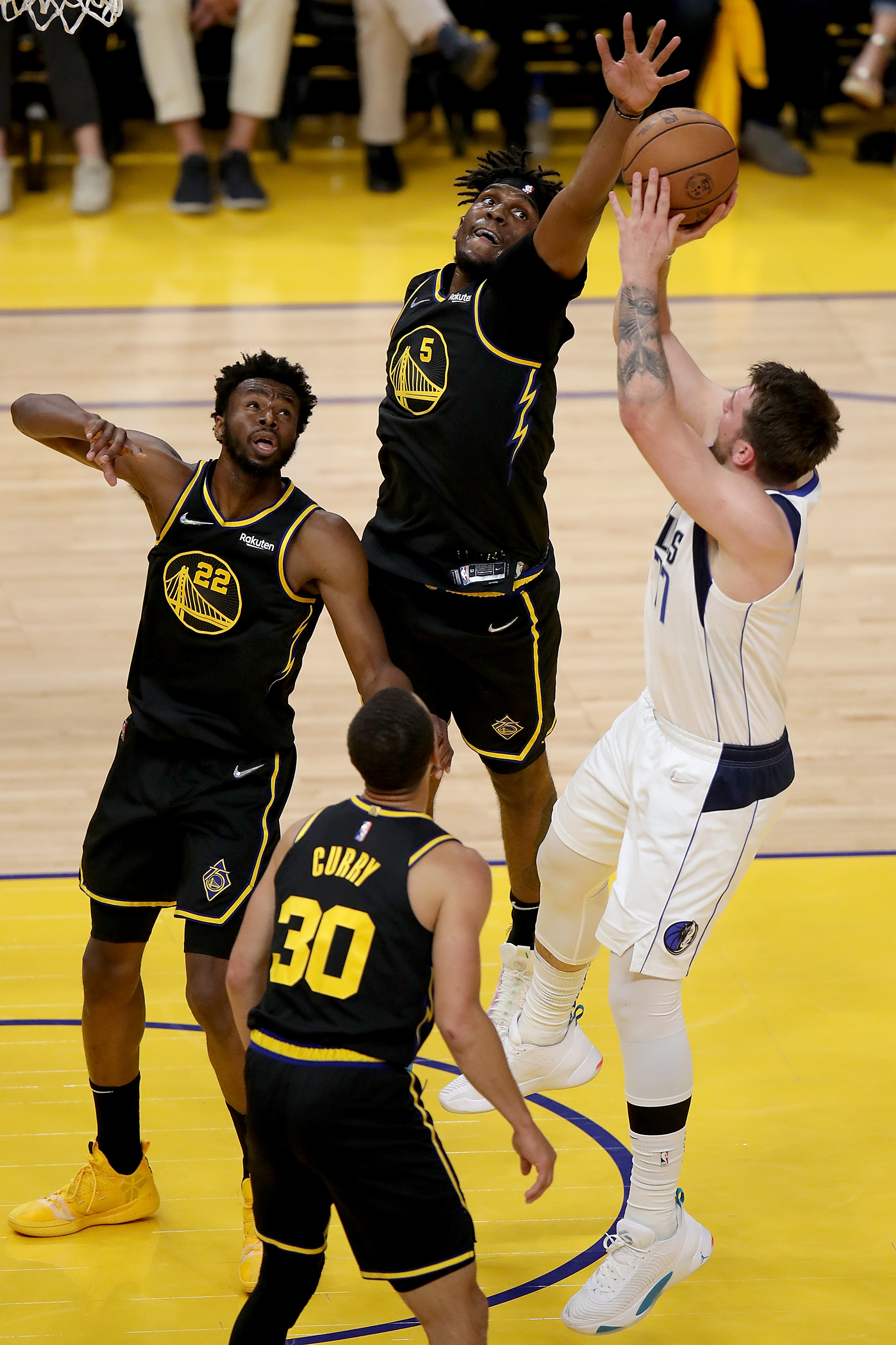 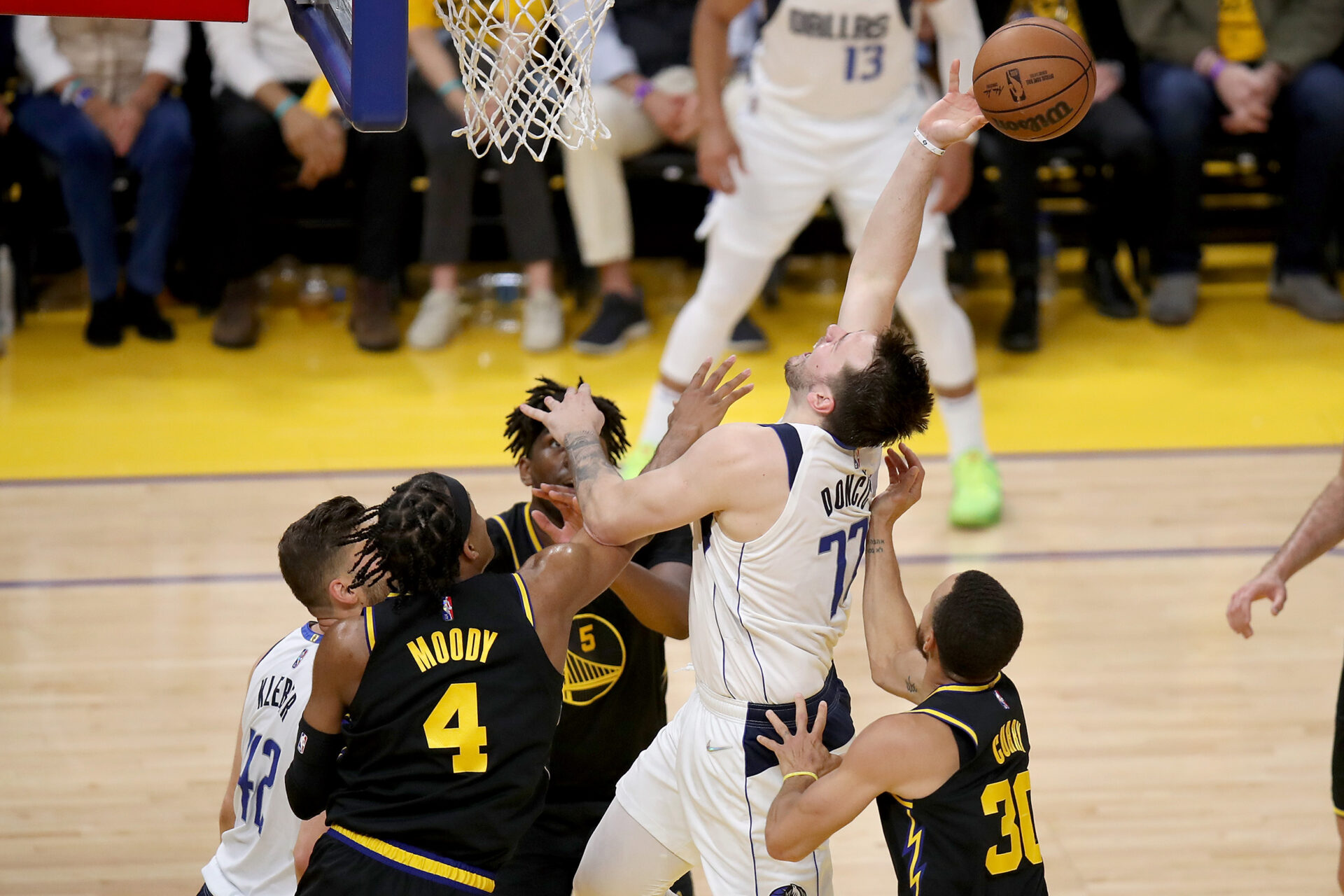 Dallas Mavericks guard Luka Doncic (77) has a shot blocked in the first half during Game 5 of an NBA basketball Western Conference finals game in San Francisco on Thursday, May 26, 2022. (Scot Tucker/SFBay.ca) 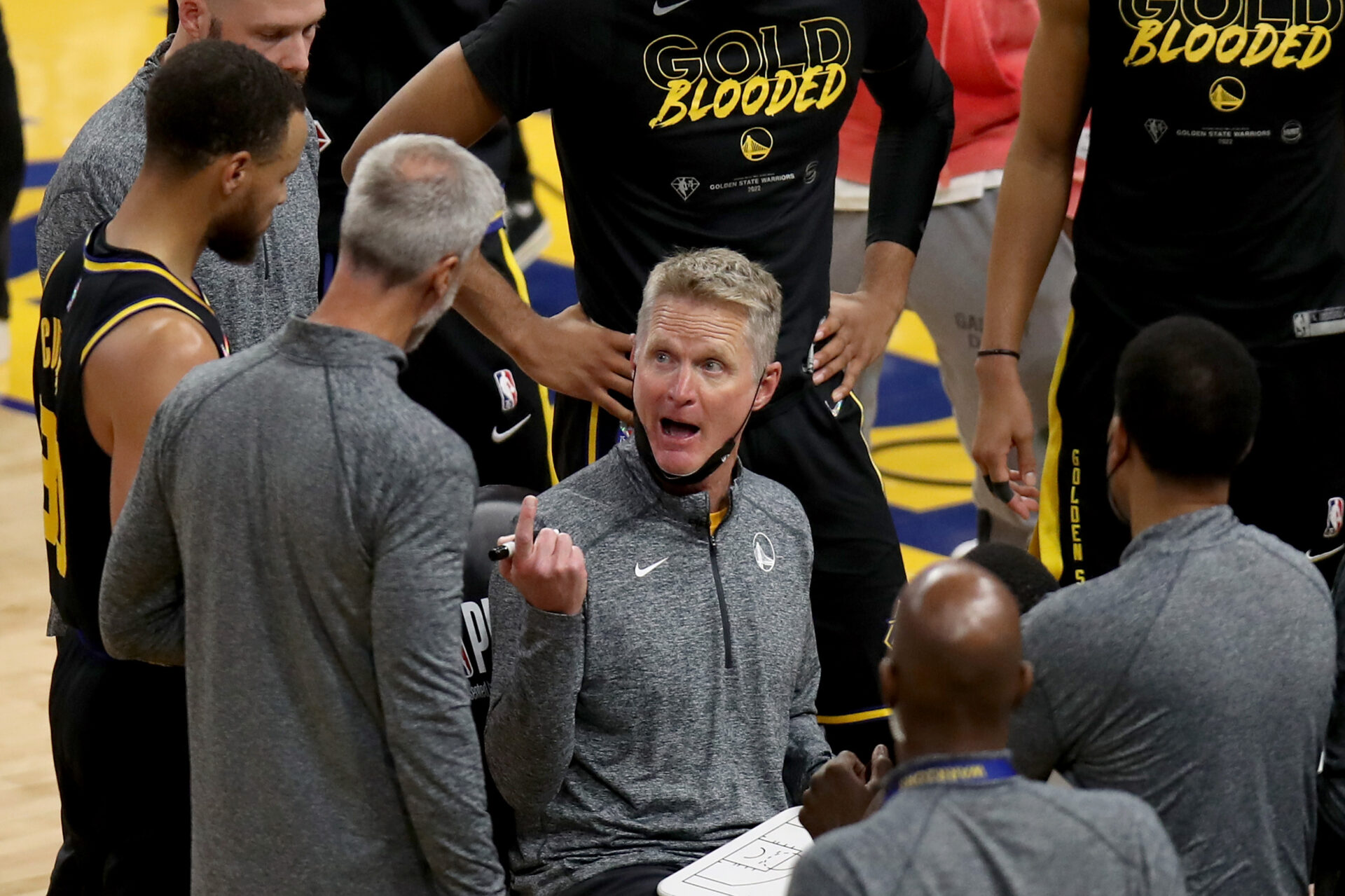 Golden State Warriors head coach Steve Kerr coaches during a timeout in the second half during Game 5 of an NBA basketball Western Conference finals game in San Francisco on Thursday, May 26, 2022. (Scot Tucker/SFBay.ca) 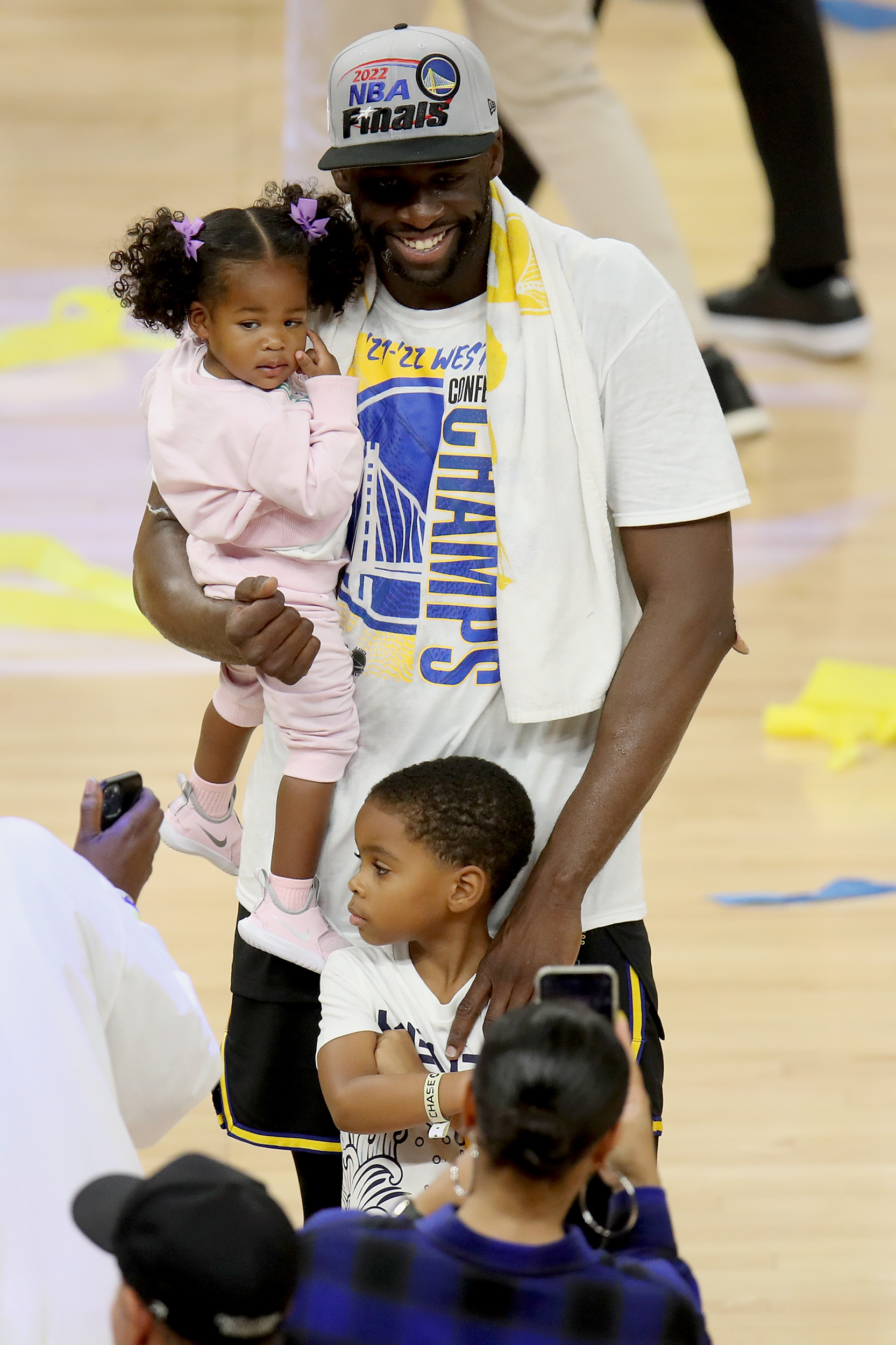 Golden State Warriors forward Draymond Green (23) celebrates a trip to the NBA Finals with his family after a 120-110 victory over the Dallas Mavericks in Game 5 of an NBA basketball Western Conference finals game in San Francisco on Thursday, May 26, 2022. (Scot Tucker/SFBay.ca) 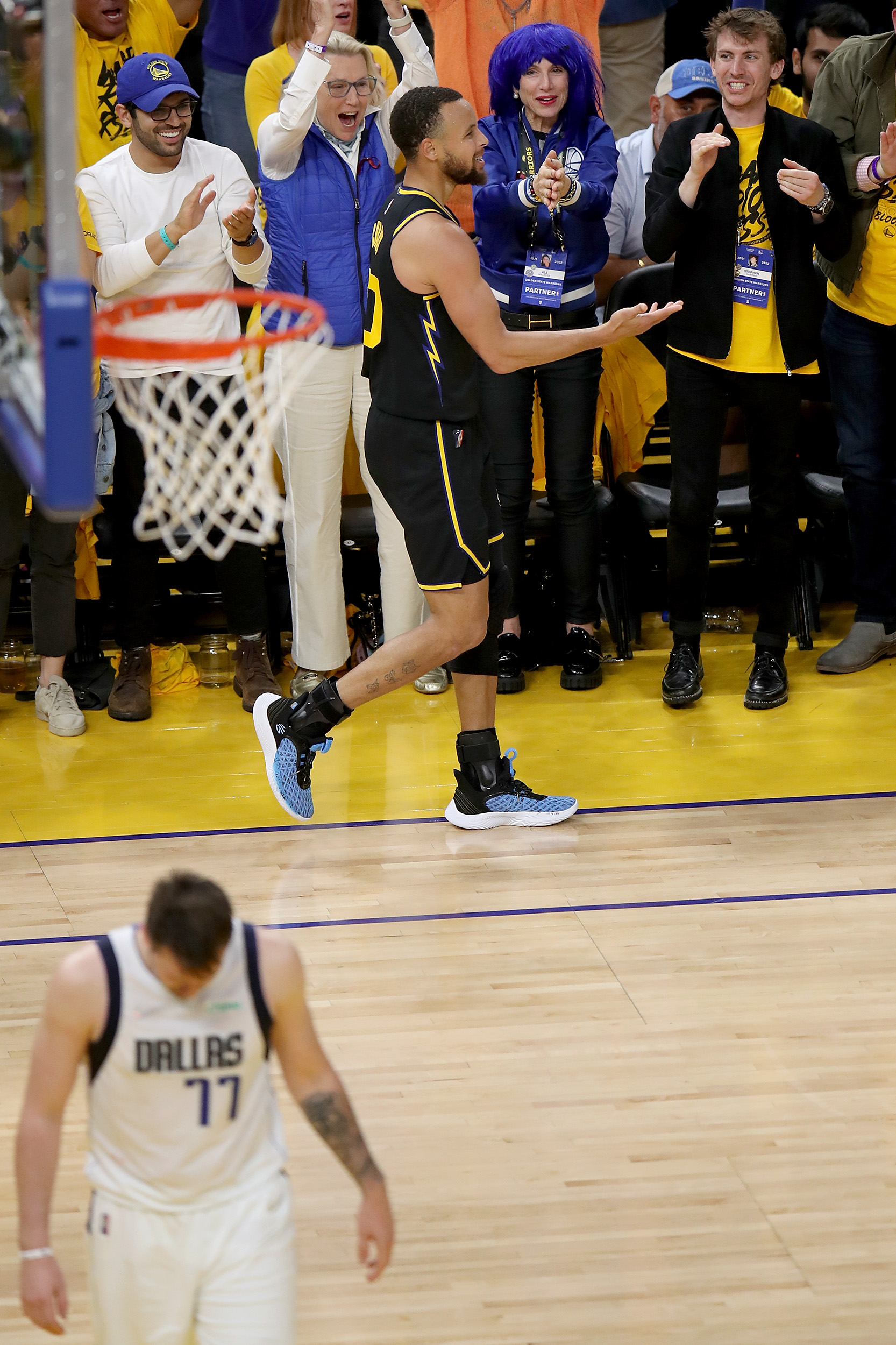 Golden State Warriors guard Stephen Curry (30) reacts after hitting a 3-pointer in the fourth period during Game 5 of an NBA basketball Western Conference finals game in San Francisco on Thursday, May 26, 2022. (Scot Tucker/SFBay.ca) 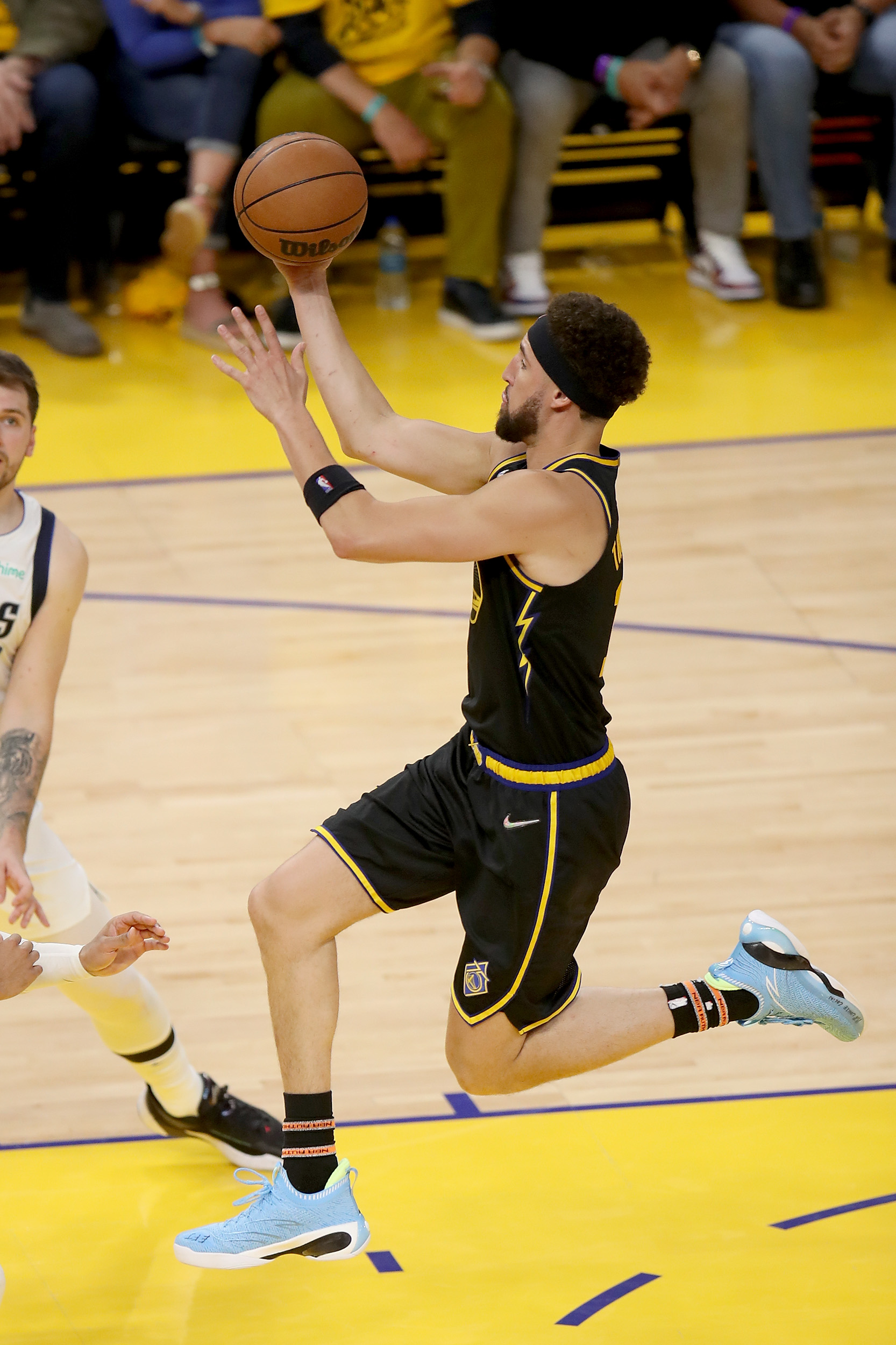 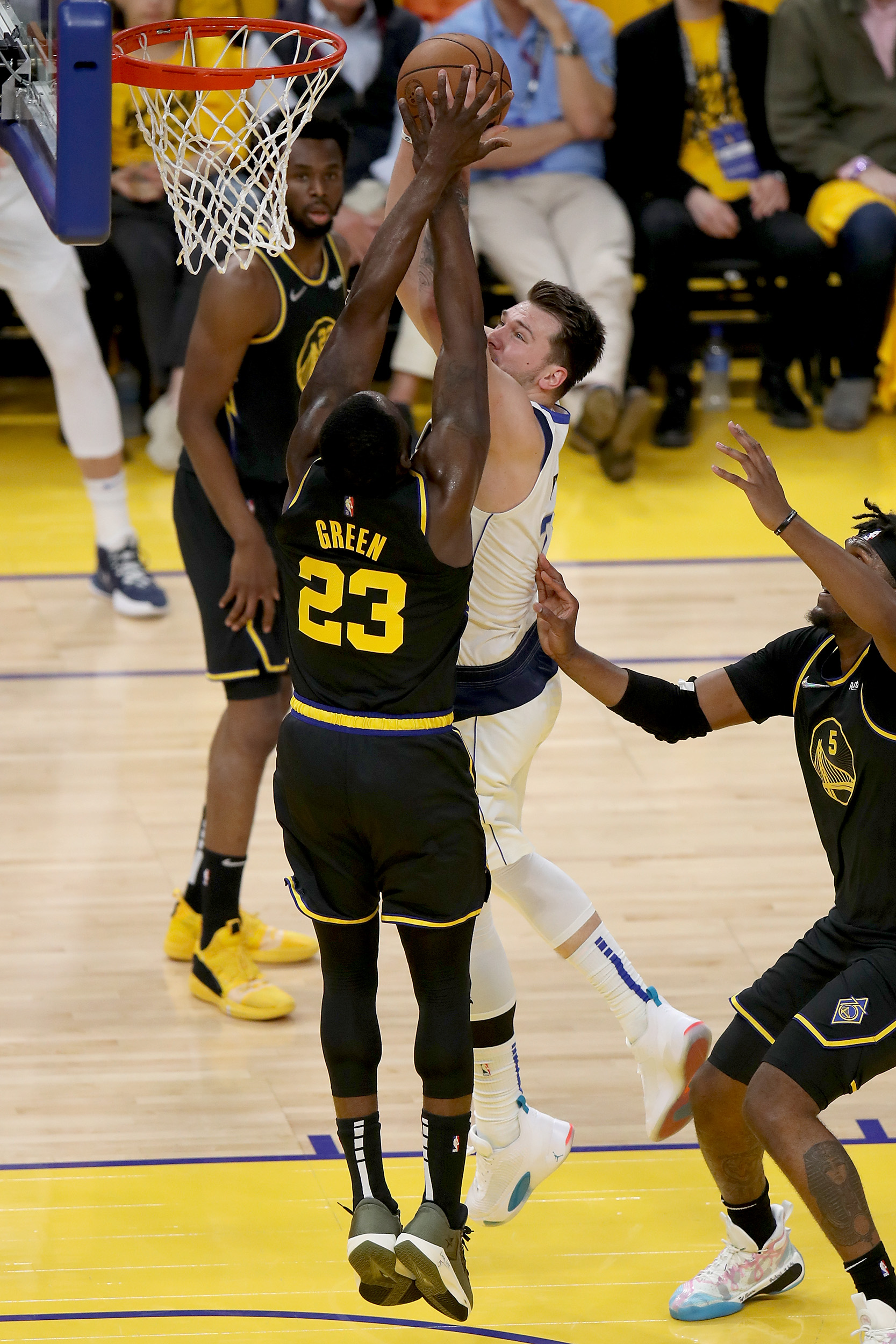 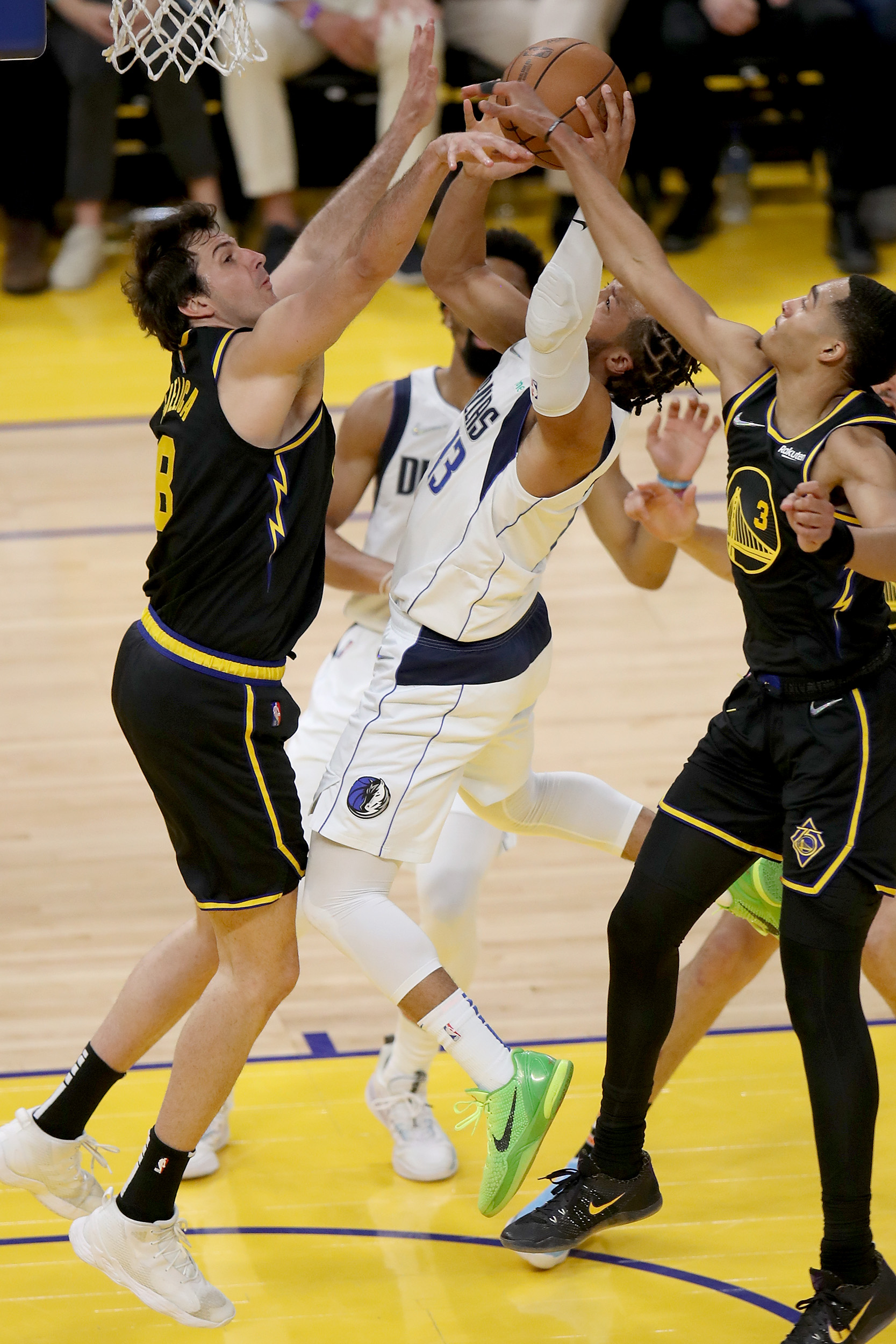 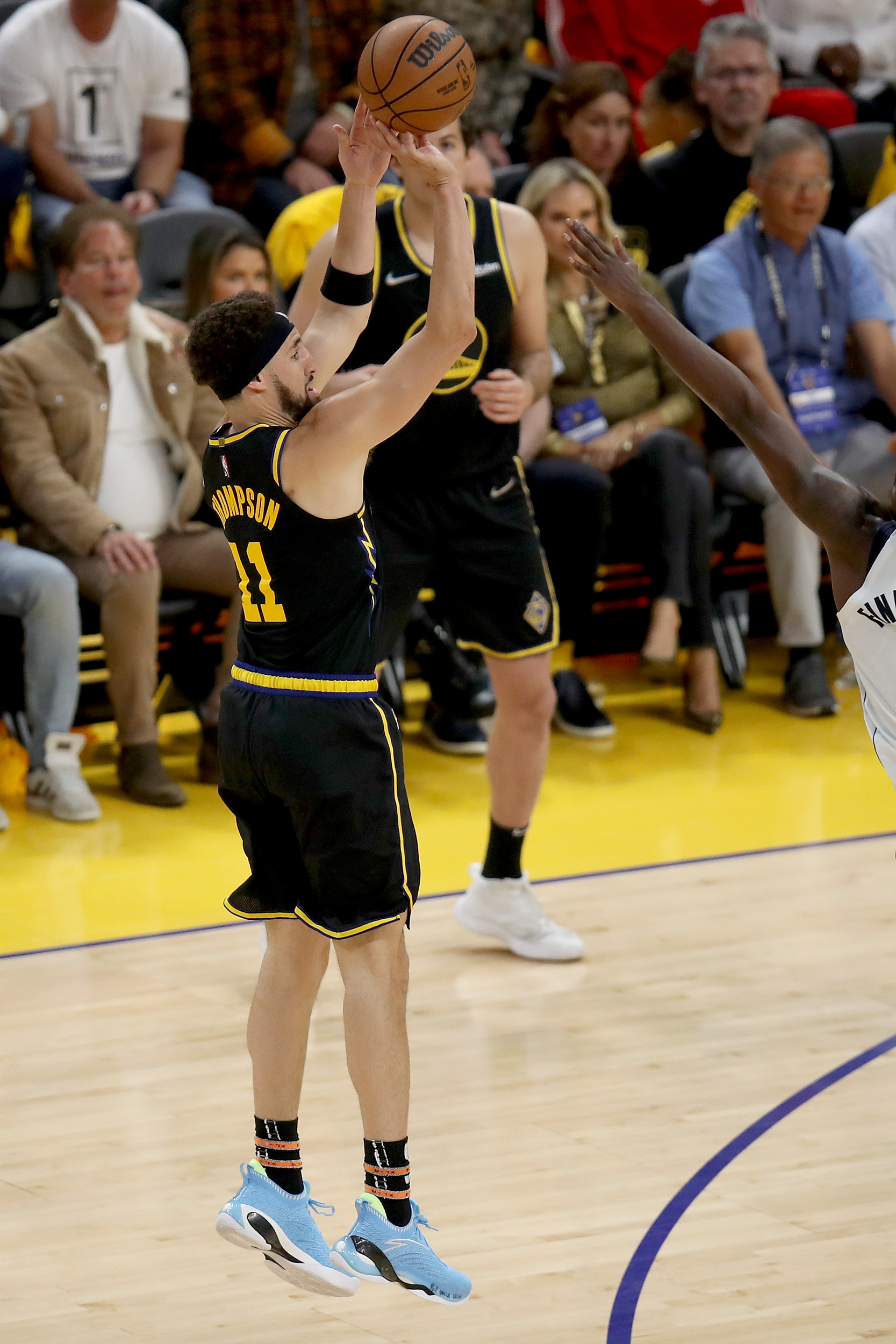 Golden State Warriors guard Klay Thompson (11) pulls up for a 3-pointer in the first half during Game 5 of an NBA basketball Western Conference finals game in San Francisco on Thursday, May 26, 2022. (Scot Tucker/SFBay.ca)