Two-year-old Avery squealed with delight as she stepped on a tile of an outdoor disco floor at Oakland Zoo’s Glowfari: A Wildly Illuminating Lantern Festival, which changed from white to blue, then purple, then red.

Toddlers, preteens and adults alike amused themselves hopping and dancing on the board game-like light-up path — which called to mind the sidewalk in Michael Jackson’s “Billie Jean” video — while, appropriately enough, The Weeknd’s ’80s-influenced “Blinding Lights” chimed and pulsed in the background. Nearby, kids crammed into circular swings that emitted a softer glow and changed colors like giant plastic mood rings.

That was only one corner of Oakland Zoo’s Glowfari extravaganza, and that’s not to mention the hundreds of lantern sculptures throughout the zoo shaped like all manner of life-size and oversize flora and fauna that flutter wings or bob heads when you least expect it. The intricate hand-painted paper, lit by LED lights, give the lanterns the dazzling effect of stained-glass windows.

Oakland Zoo volunteers and employees were treated to a special preview Thursday night. The festival opened to the public Friday and runs through Jan. 30. Maureen Mitchell of Alameda, who brought Avery and her mom, Sarah Johnson, also from Alameda, said she returned to Glowfari after attending last year’s event.

“I like how kid-friendly it is, but adults also have fun. It brings out their inner child.”

A psychedelic wall of luminescent vines, fluttering butterflies and large 3D flowers — with petals that move in hypnotic, come-hither motions — greets excited visitors. In the meadow, glowing cheetahs appear to be frozen mid-leap attacking a zebra, while a hippo is caught yawning, revealing his big pink mouth. An oversized peacock suddenly lifts his tail feathers to display his train, putting on a light show worthy of Las Vegas. Lantern elephants curl and uncurl their trunks in a surprisingly natural way.

“It’s unique. You’re here at the zoo, and you can’t see the animals, but you can see all these fake animals.”

When you walk deeper into the zoo, however, the smell of dung doesn’t let you forget that living animals call the park their home. A real eland — a type of antelope found in East and South Africa — lurked in the shadows of its enclosure across the way from a spectacular giant porcupine with radiant gold-and-white striped quills.

The Oakland Zoo animal care department works hard to make sure the lanterns and music won’t disturb the zoo animals, explained Erin Harrison, vice president of marketing and communications for the zoo.

“We’re really careful about where we place lanterns. We are not going to put a predator lantern anywhere near our giraffe habitat, because during the daytime the giraffes are going to see it, and they could get upset. And we make sure all the animals get settled in indoors for the night before we turn on the lights and start the show.”

The eland, however, is one of the few creatures given a choice about whether he wants to be indoors or outside during Glowfari. Harrison said:

“So we do testing for a couple weeks before with the animal care, where we see like, ‘Are they reacting; are they OK with it?'”

“(The eland were) one of the very few livestock sort of animals that are OK with it. He was the only one that stayed out. The other eland were like, ‘No, we’re going in for the night.’ But he stayed out, which was cute.”

Elsewhere, glowing lanterns in the forms of monkeys, birds, squirrels and cicadas cling to real trees. Acorns are projected on to the walkway, and besides the myriad 3D light sculptures, LED string lights are shaped into 2D landscapes of animals and trees. Visitors who ride the gondola up to California Trail arrive in a strange land of oversize bugs and flowers. It would almost be creepy if the beasts weren’t lit up so cheerfully.

The lanterns were created by the one of the event’s partners, the Chinese company Tianyu Arts & Culture, Inc., though Harrison said zoo staff collaborates with Tianyu to choose the animals and diorama designs for Glowfari. Once the lanterns have been fabricated in China, Tianyu ships at least 16 containers worth of sculptures to Oakland in October and sends a staff to live here for a few months to erect and maintain the lanterns throughout Glowfari’s run.

“That was a challenge in and of itself, getting it here, as you can probably guess with all the shipping craziness.”

She estimates about three containers-worth of lanterns were repurposed from last year’s event, whereas 13 containers-worth were completely new. The lanterns are packed up at the end of the event and stored at a Northern California warehouse so Tianyu can use them at other zoos, botanical gardens and lantern festivals, which have grown in popularity in the U.S. over the last few years.

Noting she was particularly impressed with the elephant trunks, Harrison said:

“This year, they added a lot more animatronic pieces. … It’s amazing what they can do. What I love is you can barely see the mechanism inside the lantern, even though they’re so thin.”

“We love changing it up and bringing in new lanterns every year. So it’s still Glowfari, but it’s like a new experience.”

Glowfari debuted at the zoo in fall 2020. Prior to that, Oakland Zoo had been known for its holiday-season event, ZooLights, which featured metal structures in the shapes of animals and holiday themes adorned with Christmas-type light bulbs. When Harrison saw Tianyu’s lanterns at a zoo conference, she said she was ready for Oakland Zoo to try something different.

“I’m like, ‘This is fantastic. We’ve been doing ZooLights for like, 25 years.’ And in my opinion, it was tired, it had been done and I wanted something fresh and new and exciting.”

Harrison initially received pushback for breaking with tradition, but she eventually got the green light to give it a try it for 2020.

“The zoo is evolving, and our events need to evolve, too.”

But no one saw Covid coming — Harrison said Glowfari had been in the works a year before the pandemic struck. Pandemic visa restrictions in fall 2020 prevented most of Tianyu’s staff from traveling to Oakland to install the most complicated interactive pieces, so Oakland Zoo had to hire local engineers to help erect the lanterns last year.

When it opened on Nov. 20, 2020, Glowfari was so popular for Bay Area residents anxious to leave their homes, it sold out through December. But another Covid wave prompted a lockdown that forced the zoo to close from Dec. 7, 2020 to Feb. 5, 2021.

“We were thinking by that time people would be over doing something for the holidays. But no, we actually had to extend it up until Daylight Savings Time because of the demand, just to make sure we didn’t have to turn people away. Because clearly everybody needed to have some fun at the time.”

Because Glowfari was such a hit, Oakland Zoo brought it back for fall 2021. This year and last, the zoo worked with Tianyu to make sure the lantern-filled landscapes were not only amusing and delightful, but educational about conservation efforts. Placed throughout the exhibition are signs with the stories of the animals depicted, like California condors, gray wolves, African elephants and polar bears, and their challenges surviving in the wild as the climate changes.

For example, dozens of lantern pandas filled a massive 3-D forest of fake bamboo. Molly Diamond of Sunnyvale, a volunteer who works with goats and in the zoo’s commissary, was admiring the scene with her boyfriend, Chris McCreddin, also of Sunnyvale, at Thursday’s event.

“We love it. It’s so magical. It’s cool that everything is different this year.”

Diamond and McCreddin started dating during the pandemic, and coming to the first Glowfari in 2020 was their first outing as a couple. McCreddin said that after being cooped up for months, visiting the attraction was a real treat.

The zoo is requiring online reservations and staggering entry times to keep visitors as safe as possible during the ongoing Covid pandemic. Unvaccinated guests are required to wear masks, while vaccinated guests are free to remove them outdoors. This year, rides like the train, gondola and carousel are open.

A (masked) Santa will be available for children to visit and pose for pictures with in the Winter Wonderland area Friday through Sunday nights in November and every night from Dec. 1 to Dec. 23, but otherwise, Glowfari is not a specifically Christmas-oriented event.

“We want to make sure everyone felt really welcomed.”

There was no Christmas music playing, but the playlist piped throughout the park definitely had a theme: Beside “Blinding Lights,” it included Journey’s “Lights” (obviously), “Flashing Lights” by Kanye West, “Everlasting Light” by the Black Keys and Manfred Mann’s “Blinded by the Light.”

Marilyn Morrish, a 20-year zoo volunteer from Walnut Creek, had been watching lanterns as they were installed for this year’s Glowfari.

“It’s impressive in the daytime, but at night, it’s breathtaking.”

Oakland Zoo’s Glowfari: A Wildly Illuminating Lantern Festival is open daily from 5-10 p.m., with the last timed ticket entry at 8:30 p.m., through Jan. 30. The zoo will be closed Thanksgiving Day, Christmas Eve, Christmas Day and New Year’s Day. Unvaccinated guests are required to wear masks in the park. Advance timed tickets, $20-$24, are required and are available at https://www.oaklandzoo.org/programs-and-events/glowfari. 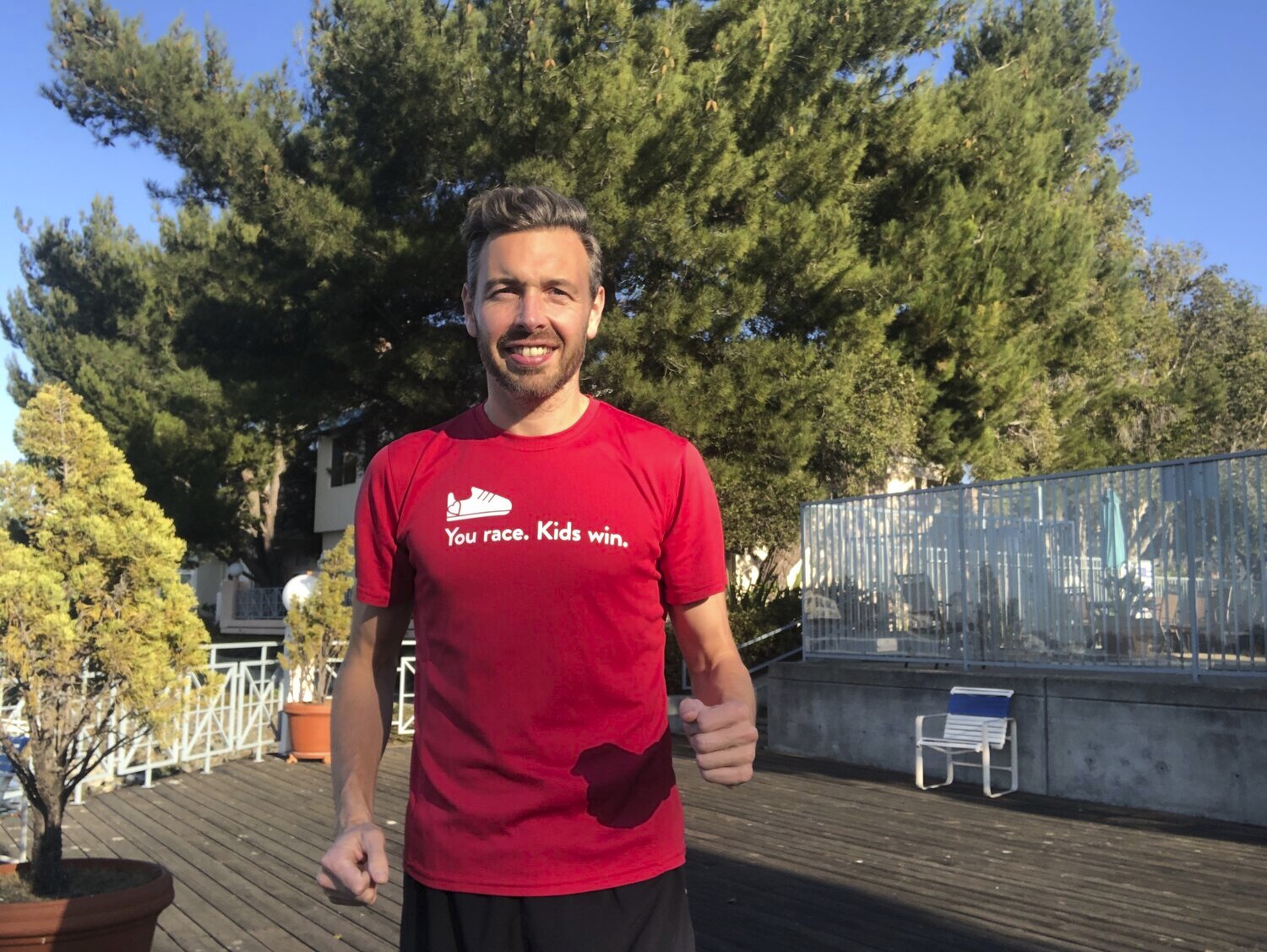