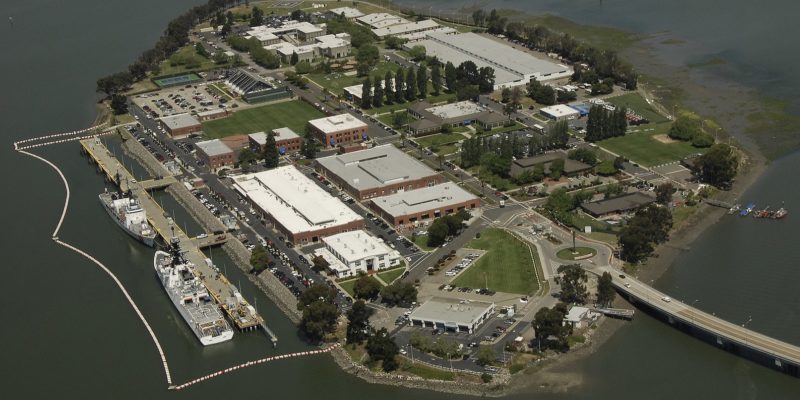 A U.S. Coast Guardsman currently station at Alameda, Calif., recently as base security, will soon face an Article 32 trial for the murder of a fellow seaman in a drunken fight while they were stationed in Alaska.

A U.S. Coast Guardsman currently stationed in Alameda will learn within weeks whether he will face a court-martial for murder in connection with the death of a shipmate in the wake of a drunken struggle in January in Alaska.

Seaman Ethan Tucker, 21, a native of Ludington, Michigan, was arrested Aug. 28 following a seven-month investigation into the death of Ethan Kelch, 19, of Virginia Beach, Virginia.

At the time of his arrest, Tucker was working in base security at Coast Guard Base Alameda, where he had been transferred in June. He was incarcerated at the Naval Consolidated Brig Miramar in San Diego upon his arrest but was released Nov. 18, according to a Coast Guard spokesman.

An Article 32 hearing — a military version of a pre-trial hearing — on Monday on Coast Guard Island in Alameda largely reaffirmed testimony from an earlier Article 32 hearing on Oct. 16 over accusations that Tucker killed Kelch after the two got into a fight during a night of drinking.

The second hearing was ordered by Vice Adm. Linda Fagan, the Coast Guard’s Pacific Area commander, amid apparent inconsistencies between some details of the prosecution’s narrative and some of the testimony, according to a report by the San Diego Union-Tribune.

Tucker and Kelch had gotten drunk during an off-duty night out, in the company of a third seaman, late on Jan. 26, while their ship, the cutter Douglas Munro, was docked at Dutch Harbor, Alaska, the Union-Tribune and the Ludington Daily News have reported.

Both Tucker and Kelch were under the legal drinking age at the time; Tucker has since turned 21.

Coast Guard searchers found Kelch unresponsive the next day, Jan. 27, along a beach, according to the Coast Guard spokesman. The spot where Kelch’s body was found is 200 yards from where Tucker was found unconscious earlier that day, according to the Union-Tribune. Alaska’s chief medical examiner, Dr. Cristin Rolf, said Kelch died of drowning, the Union-Tribune and the Daily News reported.

According to the prosecution’s narrative, Tucker and Kelch had gotten into a fight on the beach that left Kelch with injuries to the head and body.

Initially the prosecution accused Tucker of murdering Kelch by placing him in the water after causing blunt force trauma to his head, according to a charge sheet issued on Aug. 28. On Nov. 15, the charge sheet was amended; the new version, presented at Monday’s hearing, omits the word “placing” and alleges that Tucker left Kelch in the water after causing the trauma to Kelch’s head.

Kelch was known to become aggressive when drunk, Henderson has said. On the fateful night, Kelch wanted to go for a swim, spurning attempts by his companions to dissuade him, Henderson said in an interview last week.

The ensuing struggle was not sparked by animosity, but instead was a desperate and ultimately unsuccessful attempt by Tucker and the third seaman in the group to get their friend out of the water and prevent him from getting back in, Henderson said.

Some of the struggle is documented in a series of Snapchat video snippets shot by the third seaman that have been introduced into evidence, Henderson said.

The revised sheet also strikes a charge of maiming that was part of the original sheet.

The revised array of charges against Tucker includes murder; involuntary manslaughter; aggravated assault; obstructing justice (by allegedly misleading rescuers about the location of Kelch’s body); making false official statements (by allegedly lying about details of the fight); and failure to obey order or regulation (specifically, by wrongfully consuming alcohol while under age 21).

No witnesses testified at Monday’s hearing.

Henderson said there is no direct evidence that Tucker caused bruising to Kelch’s head. Henderson said the prosecution is relying on circumstantial evidence, and lamented what he characterized as an effort “to somehow shoehorn it into the maximum charge.”

The hearing officer, Coast Guard Lt. Cmdr. Benedict Gullo, will compile a report for Fagan, who is expected to decide in four to six weeks whether to court-martial Tucker and if so, on what charges, according to Coast Guard spokesman NyxoLyno Cangemi.

A mountain lion cub is recovering at the Oakland Zoo after being found malnourished in El Dorado County last month....