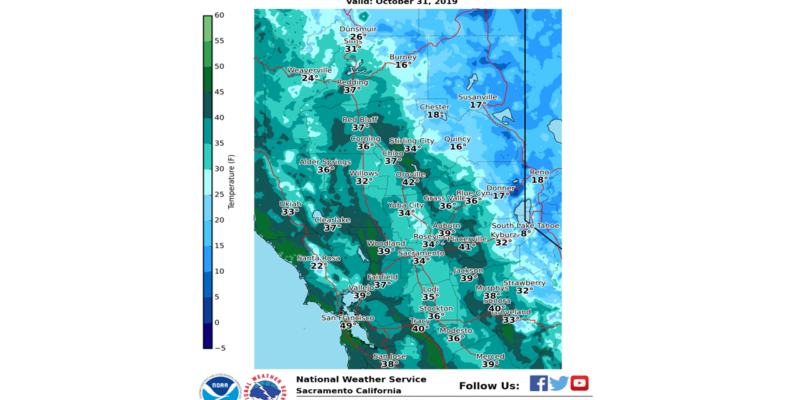 The National Weather Service forecasts a weather shift for Thanksgiving week in the Bay Area, with a high wind event and subsequent fire danger Monday, November 25, 2019, followed by the season's first rainstorm Tuesday through Thursday.

The Bay Area’s first rainstorm of 2019 is expected to arrive just in time for the Thanksgiving Day holiday travel period and immediately after another dry wind event, according to the National Weather Service.

The storm is expected to arrive on Tuesday afternoon into the evening hours across the region, but will be set-up by another offshore wind event on Monday that is expected to increase fire danger for at least one more day this year.

Meteorologists said the Monday wind event will see the strongest winds in the hills, but the event is expected to cover all higher elevations starting in the North Bay and extending as far south as Monterey and San Benito counties. Humidity levels will drop during the day Monday but will recover – along with winds that are expected to subside – Monday night.

Tuesday will see rain arrive in the North Bay in the afternoon hours, followed by the rest of the Bay in the evening hours, meteorologist Will Pi said. Winds are expected to be the strongest on Tuesday night as the storm arrives, expected to be around 30-40 mph.

Rainfall between Tuesday and Thursday is expected to be between 1/2-inch to 1 inch, with possibly 1.5 inches in the Santa Cruz Mountains and Santa Lucia Mountains.

Friday will see the region drying up, with highs staying in the low 50s but lows coming up before an overall increase in temperatures on Sunday, Pi said.

Snow levels are expected to be between 2,500-3,000 feet and may fall as low as 2,000 feet Thursday if moisture remains in the area, Pi said. Travelers going across the Sierra Nevada Mountains are warned to carry chains and be ready for changing conditions as several feet of snow is expected.

‘Harriet’ screens in Oakland at African American Museum and Library

‘Harriet’ screens in Oakland at African American Museum and Library

Celebrating "Harriet," the new film about the African-American icon, while debating its merits, approximately 70 people gathered Saturday at the...